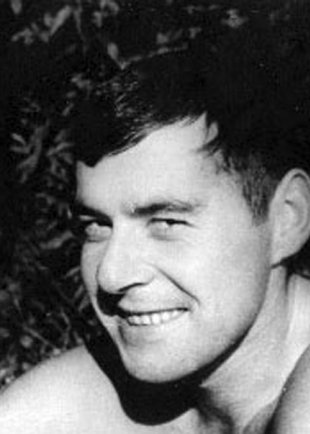 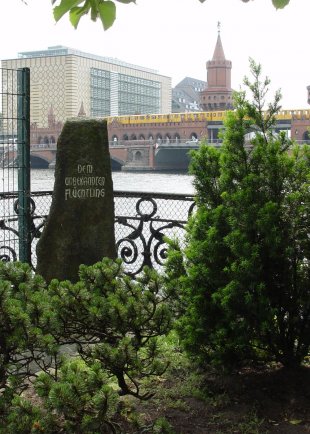 in the Spree River near the Oberbaum Bridge
at the sector border between Berlin-Friedrichshain and Berlin-Kreuzberg
It was almost midnight when he approached the bank of the Spree River. He removed his jacket, pants and shoes on the grounds of the Osthafenmühle and jumped into the water. Border guards posted on the nearby bridge noticed the fugitive immediately. 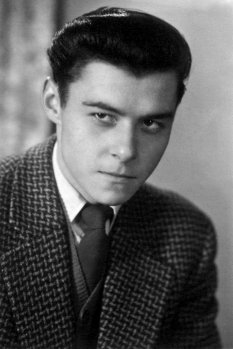 Udo Düllick; photo: 1957 (Photo: private)
October 7, 1961 was the first anniversary of the founding of the East German state after the Wall was built. State-run businesses and organizations throughout the country were having celebrations. Udo Düllick, who worked as an engineer for the Deutsche Reichsbahn, the East German railway company, in Berlin-Lichtenberg, attended the obligatory company party on the evening of October 5. The 25-year-old had long been fed up with the political pressure that permeated the communist state. His sister recalled that it was hard for him not to complain or to repress his critical thoughts. [1] Udo Düllick’s anger escalated that evening when he got into an argument with his supervisor at the company party. During the fight he evidently tore the epaulets off the other man’s Reichsbahn uniform. This conflict was probably what finally led Udo Düllick to flee. That very night he took a taxi to Warschauer Strasse in the Friedrichshain district and tried to swim from a spot not far from the Oberbaum Bridge across the Spree River to West Berlin. [2]

Udo Düllick was born on August 3, 1936 in Werder near Strausberg, east of Berlin, and spent his childhood there. He was a vivacious child, veracious and rebellious. His family was Catholic. He had a brother who was six years older. His mother died young and his father remarried and had another child, Udo Düllick’s younger half-sister. Udo Düllick first trained to be a bricklayer, and later studied engineering in Dresden. When his older brother moved to the West in 1959, Udo Düllick stayed in East Germany and continued to live with his parents. He spent the weekend of August 12-13, 1961 with his girlfriend in West Berlin. When the two of them traveled back home on August 13, they most likely had no idea that the sector border that had been sealed off the night before was to be permanent. Later, in reference to the Berlin Wall, Udo Düllick told his stepmother that he could always find a way to the West if he had to. [3] 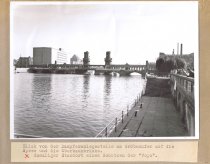 Udo Düllick: Crime site photo taken by the West Berlin police from the Oberbaum Bridge between Berlin-Friedrichshain and Berlin-Kreuzberg. The position of one of the gunmen is marked [Oct. 5, 1 (Photo: Polizeihistorische Sammlung/Der Polizeipräsident in Berlin)
He was a good swimmer, which is probably why he risked escaping through the border waters on that October evening. It was almost midnight when he approached the bank of the Spree River. He removed his jacket, pants and shoes on the grounds of the Osthafenmühle and jumped into the water. Border guards posted on the nearby bridge noticed the fugitive immediately. After they set off flares and warning shots, they fired their guns at him. Then the water police began to pursue him by boat. Udo Düllick swam for his life. He repeatedly dove under the water to avoid the bullets. West Berliners on the other side of the river watched the dramatic events and wanted to help the young man, but they could not go beyond the embankment wall because the entire width of the Spree there belonged to East Berlin. Udo Düllick had almost reached safe ground on the other side when he suddenly sank beneath the water’s surface. His dead body was retrieved from the West Berlin side an hour later. [4] 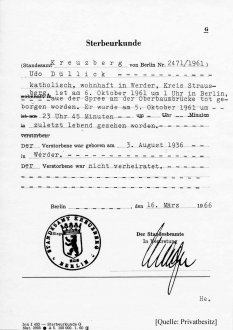 Udo Düllick: Death certificate from March 16, 1966 (Photo: private)
His pursuers were convinced they had hit him with their bullets. A situation report from the East Berlin commander stated: „The individual was fatally wounded by the shots fired and went under." [5]

But West Berliners soon established that the body of the fugitive did not have any bullet wounds. The biopsy determined that exhaustion from the chase had caused him to drown. [6] The mistaken cause of death was, however, also cited in West Berlin police and press reports. Eye-witness accounts claimed that two or three fugitives were involved. Consequently, for decades westerners continued to claim that two fugitives had died that night.

Only after the East German archives were made public was it possible to determine without doubt that Udo Düllick had been alone when he attempted to escape. [7] 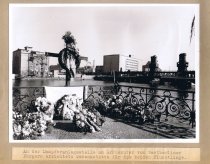 Udo Düllick: West Berlin police photo of the monument on Gröbenufer [Oct. 5, 1961] (Photo: Polizeihistorische Sammlung/Der Polizeipräsident in Berlin)
In West Berlin, the death of the fugitive, whose identity was not known at first, caused great sadness and led to a wave of protests. [8] No less than 2,500 people gathered on October 7, 1961 to attend a funeral service on the Gröbenufer in Kreuzberg. Young people set up a large wooden cross wrapped in barbed wire as a sign of their condemnation of the communist regime. Protest slogans such as „Hounded to death by concentration camp guards" were painted on banners and signs.

Over the following years memorial services took place there regularly. The funeral on October 18, 1961 was also an official event. A memorial service conducted by the Kreuzberg district assembly was broadcast live by RIAS, the radio station in the American sector, after which the deceased was buried before a large crowd at the Jerusalem Cemetery in Kreuzberg. Since his religion was not known, the ceremony was led by both a Catholic and Protestant clergyman. [9]

Udo Düllick’s parents heard on the news about the death of a man at the Oberbaum Bridge and worriedly contacted the West Berlin authorities. But communication between East and West was difficult after the Wall was built and it took a number of weeks before they knew for certain that the man who had died was actually their son. The West Berlin authorities did not reveal his name to the press out of respect for the relatives who feared repercussions by the East German state. [10] The Catholic church congregation in Rehfelde, the town next to his hometown, held a requiem for Udo Düllick in November 1961. The East German secret police demanded that the circumstances of his death not be mentioned.