Scattered, hidden or forgotten – the last testimonies to the division of Berlin are missed by most visitors to the city. This free app for iPhones, iPads and Android smartphones helps find them. 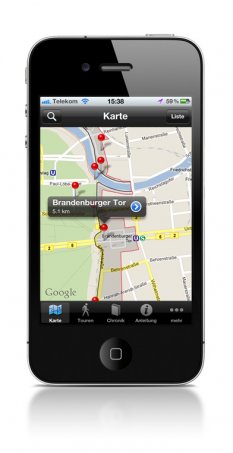 Die Berliner Mauer iPhone-App
The Berlin Wall divided East and West for 28 years, two months and 28 days. It cut the city in two, ran through buildings, interrupted streets and tore apart families, friends and couples. But where exactly did the Wall run?

The iPhone app 'The Berlin Wall' gives a detailed answer. An interactive map in the app shows the exact location of the Wall. Photos, audio and video clips and texts about the respective site are stored at historically important locations between the Brandenburg Gate and Potsdam Square. A free data package with more information on historically important sites throughout Berlin and Potsdam can be downloaded in the app. The app serves both as an interactive travel guide on the spot and as a general source of information.

The Berlin Wall in the iTunes App Store (iPhone)

The Berlin Wall HD in the iTunes App Store (iPad)

The Berlin Wall in the Android Market

The app is based on the website chronik-der-mauer.de and is a joint project by the Bundeszentrale für politische Bildung, Deutschlandradio and the Zentrum für Zeithistorische Forschung Potsdam e.V. "The Berlin Wall" was awarded with the "Politikaward 2011", "digita 2012" and the "Comenius-EduMedia-Siegel 2012".