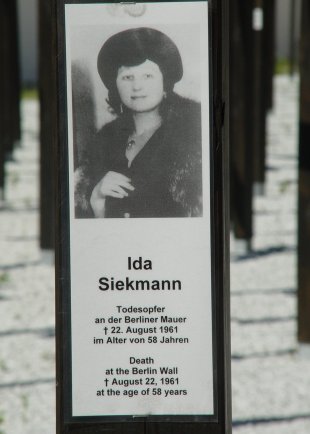 after jumping out of her apartment window at Bernauer Strasse 48
at the sector border between Berlin-Mitte and Berlin-Wedding
The circumstances of her death were diligently recorded in East Berlin. The East German police noted in one of their routine reports: "On August 22, 1961, at 6. 50 a.m., Ida Siekmann […], single, jumped out the window of her third floor apartment in the front building and onto the street […]. S. was carried away by the West Berlin fire department.Ida Siekmann was born on August 23, 1902 in Gorken, a small village that at that time belonged to the West Prussian district of Marienwerder and today is part of Poland. It is not known when she left the East Elbian province and went to Berlin.

These measures instilled fear in the residents and, in desperation, many of them jumped from their windows or climbed down a rope to escape to the West. The West Berlin fire department stood on the sidewalk and tried to catch them in their rescue nets to prevent them from getting injured. On August 21, Ida Siekmann watched as the entrance to her building was barricaded shut. Early the next morning she threw her bedding and other belongings out the window of her third floor apartment. Then she jumped. Perhaps she was scared of being discovered. The West Berlin firemen had no chance to catch her in their rescue net. She was badly injured when she hit the sidewalk and died on the way to the nearby Lazarus Hospital – one day before her 59th birthday. [1]

The circumstances of her death were diligently recorded in East Berlin. The East German police noted in one of their routine reports: "On August 22, 1961, at 6. 50 a.m., Ida Siekmann […], single, jumped out the window of her third floor apartment in the front building and onto the street […]. S. was carried away by the West Berlin fire department. The blood stain was covered up with sand." [2] 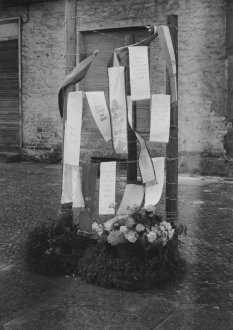 Ida Siekmann: Memorial erected by the Wedding district office in September 1961 (photo: 1961) (Photo: Polizeihistorische Sammlung/Der Polizeipräsident in Berlin)
On the west side, her death at the Berlin Wall set off a wave of indignation. Decades later, a West Berlin police officer who personally witnessed Ida Siekmann’s fall recalled how shocked residents and passersby had been. [3]

The press reported in detail on the "fatal jump to freedom" and made it perfectly clear that the East German leadership bore responsibility for the tragic occurrence: The "Berliner Morgenpost" wrote that "Ulbricht’s brutal measures against our fellow-countrymen in the eastern sector of Berlin have taken a human life yesterday." The "Bild-Zeitung" called the death of an East Berliner "an indictment of the communist regime." [4] Newspaper articles also noted the widespread frustration over the fact that the western Allies and German federal government had shown such reserve in reaction to the blockade measures. After the Wall was built, Federal Chancellor Konrad Adenauer did not rush to West Berlin. He arrived on the day Ida Siekmann died and was strongly criticized for waiting this long. [5]

An official funeral service was held for Ida Siekmann on August 29, at the Municipal Cemetery on Seestrasse in Wedding. A large number of West Berlin residents attended the service. Red roses and white carnations in the colors of West Berlin decorated the coffin. Official representatives of the district, Senate and federal government expressed their condolences to the sister of the deceased. After the burial, Ernst Lemmer, federal minister of all-German affairs, and Helmut Mattis, the district mayor of Wedding, placed a wreath in front of the building at Bernauer Strasse 48 which bore the inscription: "deprived of freedom." Many residents and passersby paid homage to the deceased at the site where she died. One writer noted at the time that the sidewalk was always covered with wreaths and flowers. [6]

The district office of Wedding erected a monument for Ida Siekmann at her death site. It consisted of three wooden logs enveloped in barbed wire. [7] Regular memorial services took place there over the following decades. German and foreign state guests also paid their respects to the site as a form of public commemoration on the west side of the Wall. Robert Kennedy, the American attorney general, and Federal Chancellor Konrad Adenauer also made a stop at the monument dedicated to Ida Siekmann. Like so many other politicians, they too laid a wreath and honored the deceased with a moment of silence – a gesture that was also an expression of their rejection of the border regime established in East Germany.