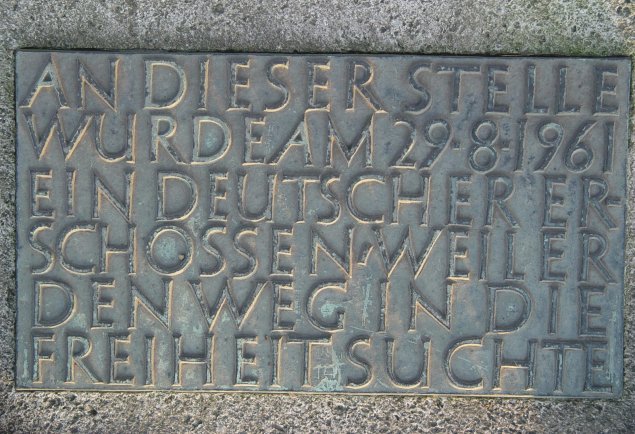 "The inhuman division of our city," reported the „Berliner Morgenpost" on August 30, 1961, „claimed a third life yesterday. At the zone border in Lichterfelde, an unknown fugitive was murdered by the Vopo [East German Police] while trying to swim to freedom through the Teltow Canal." [29] The East German authorities had long known the identity of the deceased by then, but they did not reveal his name for decades. [30] Even the victim’s relatives were not notified. Not until the East German archives were made accessible was it discovered that the man whose escape attempt ended fatally on this late summer day was the 27-year-old Roland Hoff.

Roland Hoff was born on March 19, 1934 in Hanover, where he grew up with his three sisters. One of his sisters recalled that the only son was their mother’s favorite and continued to live at home even after he had completed an apprenticeship as a pipe-layer. [31] He did not move out until he went to East Germany at the age of 27 in June 1961. Like so many West Germans who resettled in the East, he was not motivated by political convictions. [32] His mother believes that he drove to the inner-German border and requested residency in East Germany because he feared being penalized for having driven his moped while under the influence of alcohol. After completing the admissions procedure at the Barby Reception Camp near Magdeburg, Roland Hoff was assigned an apartment and job in Lusatia in Saxony. But only a short time later he wrote to his mother that he was already thinking about coming back to the West. [33] The Berlin Wall put an abrupt end to these plans. Apparently Roland Hoff spoke out openly against the closure of the border at his workplace ten days later. This resulted in his discharge „due to absenteeism and inciting slander against the state in violation of the measures of 13.8.61." [34] He failed to respond to the summons to appear before an arbitration court „for the purpose of clarifying his employment situation." Instead he packed his belongings, sent them by mail from Forst to his mother in Hanover and headed off in the direction of Berlin on August 29.

That day in Teltow, a suburb in the southwest of Berlin, construction was being carried out to facilitate surveillance of the East German side of the Teltow Canal. The border to the West Berlin district of Lichterfelde on the other side ran through the middle of the canal here. A group of forty construction workers were busy clearing an embankment under the surveillance of border police and militia work units. According to a Potsdam police report, Roland Hoff must have managed to disguise himself as a worker and reach the bank undetected. At 2 p.m. he jumped into the border waters with a briefcase under his arm and swam to the West Berlin side. „Don’t shoot! Please don’t shoot" he called out after the first shots were fired. But four border guards continued to fire at him until he was fatally wounded in the head and sunk beneath the water’s surface. [35] 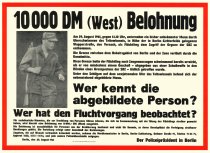 Roland Hoff: West Berlin wanted poster, Aug. 30, 1961 (Source: Polizeihistorische Sammlung/Der Polizeipräsident in Berlin)
The workers on the east side of the Teltow Canal who had witnessed this violent act were horrified and spontaneously stopped their work. One worker expressed his displeasure loudly, calling the border soldiers „concentration camp guards" and „murderers," and was consequently detained temporarily and interrogated. [36]

The authorities also took strong action against the workers of a nearby industrial plant, the „Teltower Geräte und Reglerwerk," who expressed their sympathy with the victim. A flier from the factory leadership accused an employee of making light of and defending the escape attempt because she had described the guards as murderers. [37] The flier is a good example of how East German propaganda villainized a victim in order to legitimize the brutal action taken against fugitives: „A henchman of the Cold War was not able to complete his assignment. A louse on the body of our worker and peasant state has been squashed before it could bite." [38] This kind of propaganda, which equated the victim with the enemy, was a clear and intentional public demonstration of the harshness of the authorities. Similar examples can be found in the East German press reports that employed the same clichés and prejudices. „Neues Deutschland," for example, characterized Roland Hoff and Günter Litfin, who was shot and killed a few days earlier, as „sinister elements," „criminal characters" and „riffraff." The East German „Märkische Volksstimme" responded to the West Berlin Senate’s protests with the statement: „You speak of freedom and lament that East German border control officials shot criminals who disregarded all the warning calls and shots and violated our border in an attempt to escape the punishment they deserved." [39]

Within a very short time police and firemen, as well as journalists and photographers, arrived at the site where the shooting had taken place and aimed their cameras at the men in uniform on the other side of the canal. In the western media and in commentaries the shots were unanimously condemned and the brutality of the act was criticized. [40] In response to this most recent fatality the West Berlin authorities conducted an investigation of the alleged criminals and would continue to do so in every case that followed. A reward of 10,000 German marks was offered for tips that would lead to the identification of the perpetrators in this unprecedented search operation. A wanted poster showing one of the marksmen was hung at many places along the Wall as a deterrent. [41] In the following years, defectors to the West provided West Berlin authorities with the names of the border guards involved in the shooting, but they could not take action against them yet. After the Wall fell, however, the three former border guards were brought to trial, but the courts were unable to determine which one was responsible for the fatal shot. [42] The East German authorities never divulged Roland Hoff’s name. His mother, after hearing western media reports, was convinced that it was her son who had been found dead in the Teltow Canal and she notified the West German authorities. But her lifelong efforts to receive information from the East German authorities remained unsuccessful. 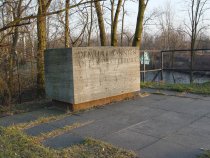 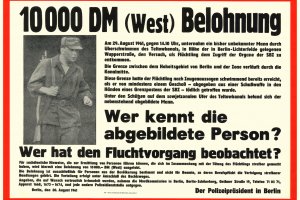 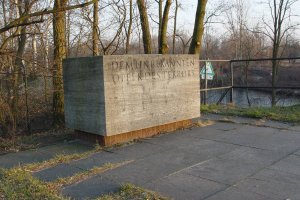