Rudolf Urban: Honor guards at the memorial on the first anniversary of the Berlin Wall (photo: Aug. 13, 1963) (Photo: Polizeihistorische Sammlung/Der Polizeipräsident in Berlin)

died from consequences of his escape on September 17, 1961
It was August 19 and the American vice president Lyndon B. Johnson had just arrived in West Berlin. His visit was supposed to restore the West Berliners’ faith in the United States after the protecting powers had shown such reserve in response to the sector border’s being sealed off, a reaction that was incomprehensible to West Berliners. On the east side of the city the Urbans began preparing their escape.The driver Rudolf Urban was 47 years old when the Berlin Wall was built. He lived with his wife at Bernauer Strasse 1 in East Berlin at the time. He was born in the four-story apartment building near the Reconciliation Church. Like all the buildings on the southern side of the street that belonged to the administrative district of Mitte, they could only be entered from the sidewalk situated in West Berlin. This unusual situation at the sector border had affected the lives of the residents for years, but it became extremely acute when the East German leadership began sealing off the inner city sector border on August 13, 1961.

In response to the barriers blocking all roads and crossings between the two sides of the city, a number of people tried to flee to West Berlin from the border houses on Bernauer Strasse. [1] The East German authorities took drastic measures in response to these actions. They sealed all the entrances and windows of the border buildings and placed armed guards in the hallways and stairs of the buildings. Bernauer Strasse became notorious during this time because the western media publicized these events with pictures and reports. A West Berlin author described the oppressive situation: "Only the residents on the upper levels can still speak to their acquaintances in West Berlin from their windows. The building doors are nailed shut, the ground floor windows are walled up. Ulbricht’s ‘Socialism’ is creeping along the corridors in mason’s stockings." [2]

Like so many other residents, this form of harassment led Rudolf Urban and his wife to attempt to flee. In an interview in 1980, Mrs. Urban said that it was not an easy decision for her husband to make. She had pushed to leave from the very first day, but he was reluctant at first. He did not want to abandon what he had been working towards for so many years and insisted that he had done nothing wrong. On the evening of August 18 the couple heard loud hammering and realized that the building entrance that opened onto the West Berlin sidewalk was being nailed shut. This is what tipped the scales for her husband. "When they nailed the front door shut, he turned around and said, ‘Now we are going.’" [3]

The next day was a Saturday. It was August 19 and the American vice president Lyndon B. Johnson had just arrived in West Berlin. His visit was supposed to restore the West Berliners’ faith in the United States after the protecting powers had shown such reserve in response to the sector border’s being sealed off, a reaction that was incomprehensible to West Berliners. [4] On the east side of the city the Urbans began preparing their escape. They planned to slide down a rope from a window of their first floor apartment. Frau Urban recalled later that they had refrained from taking the safer route from the window of a ground floor apartment out of consideration for their neighbors. The ground floor apartments were not yet evacuated, but watch guards were posted in the staircase and checked the papers of everyone who went in and out of the building. It would have been impossible to climb out their neighbors’ window without making them an accomplice to the Urban’s escape. So the couple attached a rope to their window frame instead and slid down one after the other to Bernauer Strasse. But both Rudolf Urban and his wife slipped, injuring their hands and feet, and had to be taken to the nearby Lazarus Hospital. [5] 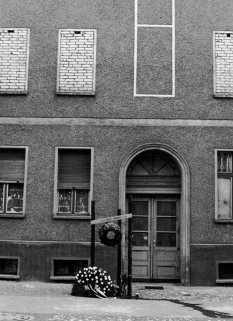 Rudolf Urban: Memorial on Bernauer Strasse (photo: 1962) (Photo: Polizeihistorische Sammlung/Der Polizeipräsident in Berlin)
Many years later, two former nurses recalled how, when the Urbans arrived, they were both in a severe state of shock. Rudolf Urban was evidently wearing a number of suits, one over the other, because he didn’t want to leave them behind in his East Berlin apartment. [6] The nurses didn’t want to bother the patient with questions about the circumstances of his accident. [7] He had crushed his heel bone and was treated as an in-patient. Rudolph Urban caught pneumonia while in the hospital and died in the West Berlin Lazarus Hospital on September 17, 1961. He was 47 years old. He was buried in the Dorotheen Cemetery on Liesenstrasse in Wedding.

At the time the West Berlin public was not aware of Rudolf Urban’s escape or his week-long stay in the hospital. Authorities and media first publicized the East Berliner’s fate after he had passed away. A police report from November 1961 stated that "he died from injuries received during an escape." [8]

The Wedding district later placed a memorial of wood and barbed wire at Bernauer Strasse 1 at the site of the accident to commemorate Rudolf Urban. According to newspaper reports, East Berlin policemen railed and threw stones at the workers while they were setting up the monument. [9] Each year on the anniversary of the day the Wall was built, memorial services were held for him and other victims of the Berlin Wall. In October 1965, when East Berlin demolition crews began tearing the border houses on Bernauer Strasse down to the ground floor façade, a temporary covering was placed over the monument so that it would not be damaged. [10] When the new concrete wall was erected in 1980, the building from which Rudolf Urban had fled ultimately gave way to the expansion of the East German border regime.