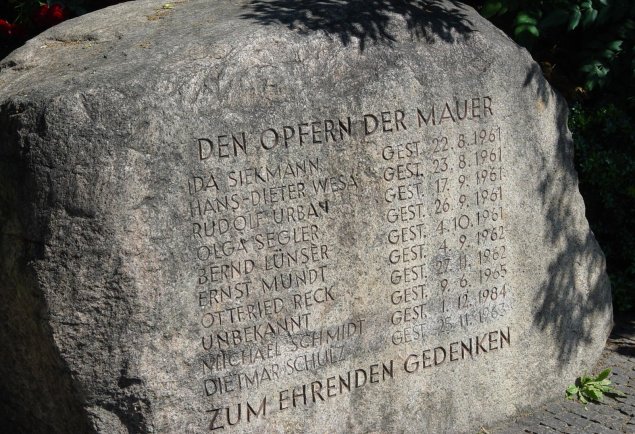 died from consequences of her fall on September 26, 1961
Olga Segler decided to jump from the window of her second story apartment on September 25. Her daughter waited down below on the sidewalk, encouraging her to jump. The firemen caught the eighty-year-old woman in their rescue net but she injured her back on impact and had to be taken by ambulance to the nearby Lazarus Hospital.Olga Segler was born to parents of German descent in 1881 in a town called Prischt that later belonged to Ukraine. No other official documents providing information about her life exist. She was eighty years old in 1961 and lived at Bernauer Strasse 34, near Brunnenstrasse, in the East Berlin district of Mitte. Her building, like the other ones on that side of the street, formed the border to the western part of the city. Consequently, the elderly woman found herself in an unusually precarious situation when the border was sealed on August 13. For one, she was separated from her daughter, who lived just a short distance away on the West Berlin side of the sector border. Moreover, she experienced the East German authorities’ increasingly ruthless treatment of Bernauer Strasse residents. For almost six weeks Olga Segler endured life in a barricaded building with watch guards posted in the corridors and staircases to prevent people from escaping to the West. They monitored the movement and behavior of the residents 24 hours a day.

The East German authorities regarded the border houses on Bernauer Strasse as a "focal point of border breaches." [1] According to an East Berlin situation report, in September 1961 the most common method of escape included "jumping from apartment buildings located directly on the state border into rescue nets held by the fire department, or roping down the fronts of buildings." [2] Within the first three months after the Wall was built, more than 150 people reached the neighboring West Berlin district of Wedding through escapes of this kind. Many were injured during the dangerous undertaking and had to be treated by a doctor. [3] The first fatality occurred on August 22 when Ida Siekmann, a 58-year-old woman, was fatally injured while jumping from her apartment.

The situation on Bernauer Strasse escalated further in September. The East German authorities began a major evacuation operation on the morning of September 24. Two thousand people were to be moved out of their apartments, most of them against their will. The West Berlin police and fire department expected that many residents "would in the last minute try to flee to freedom before their apartments are evacuated." [4] Dramatic events took place as a consequence of the evacuation. A 77-year-old woman who was ready to jump hung in the air for minutes outside her window because members of an evacuation crew tried pulling her back into her apartment while West Berliners from below pulled her downward. She finally fell into the rescue net of the fire department. [5] 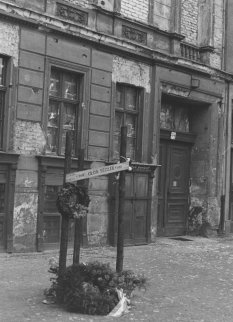 Olga Segler: Memorial in front of her building at Bernauer Strasse 34 (photo: June 5, 1962) (Photo: Polizeihistorische Sammlung/Der Polizeipräsident in Berlin)
Olga Segler decided to jump from the window of her second story apartment on September 25. Her daughter waited down below on the sidewalk, encouraging her to jump. The firemen caught the eighty-year-old woman in their rescue net but she injured her back on impact and had to be taken by ambulance to the nearby Lazarus Hospital. Olga Segler died the next day. [6] Her heart had given out as a consequence of the overexcitement she experienced during the escape. [7]

The East German authorities registered Olga Segler’s escape attempt as a "border breach," and the official report referred to her successful "flight from the republic." [8] Believing that the fatally injured old woman had survived, they opened an investigation against her. [9]

Meanwhile, on the other side of the Wall, Olga Segler was being publicly mourned. Her funeral was held at the municipal cemetery in Berlin-Reinickendorf. A memorial was dedicated at the site of her fall in November 1961. It resembled the monuments of wood and barbed wire that had been dedicated to Ida Siekmann and Rudolf Urban, both of whom had lived on Bernauer Strasse and lost their lives trying to escape. For years to come, new wreaths and flowers were placed at the monument on memorial days.

The building where Olga Segler had lived was torn down in 1966 except for the ground level façade. This haunting relic of a building, with walled up windows, functioned as the border wall until 1980. Later, the last remains of the original building were replaced by a concrete wall.