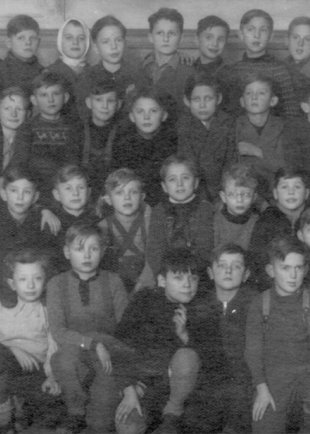 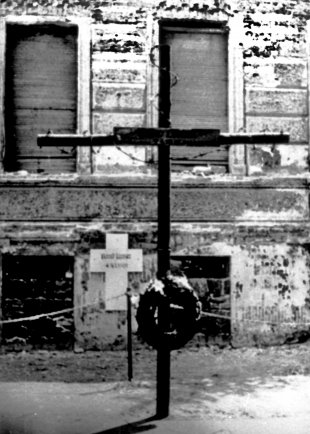 while jumping from the roof of the building at Bernauer Strasse 44
at the sector border between Berlin-Mitte and Berlin-Wedding
Bernd Lünser planned to get around the barriers and border guards by climbing onto the roof of a house on Swinemünder Strasse in the evening. From there he planned to cross the rooftops until he reached the corner building at Bernauer Strasse, from where he intended to use a clothes line to scale down the front of the building.When the Berlin Wall was built, hundreds of students from the eastern section and outskirts of the city were cut off from the universities where they studied in West Berlin. The 22-year-old Bernd Lünser was caught by surprise when the sector border was sealed off in the middle of the semester break.

He was born in Berlin on March 11, 1939 and, after his parents divorced, lived with his mother in the Friedrichshain district of Berlin. His father lived in West Berlin. After graduating from high school at the age of 18, he completed a bricklayer apprenticeship with an East Berlin company before beginning his studies at an advanced technical college in West Berlin in the winter semester of 1959/60. He had wanted to become a civil engineer and his instructors and fellow-students at the State Engineering School of Architecture in Berlin-Neukölln commented that he was exceptionally talented and popular. [1] The police and press reports do not shed light on what led him to study in West Berlin, but presumably, like many other people of his age group who commuted daily from their homes in the East to colleges and universities in the West, he was dissatisfied with the educational system in East Germany.

According to his father, Bernd Lünser had been determined to complete his studies in West Berlin even after the border was closed and began looking desperately for a way to reach the West before the new semester began in October. [2] His hopes for attaining a legal permit to cross the border were dashed and he was unable to find an adequate escape route. Consequently, Bernd Lünser died tragically on October 4 while trying to rope down from the roof of an East Berlin border house on Bernauer Strasse. The circumstances of his death attracted attention in both the East and the West because it was the first time since the Wall had been built that West Berlin police officers returned the fire of East Berlin border guards. [3] 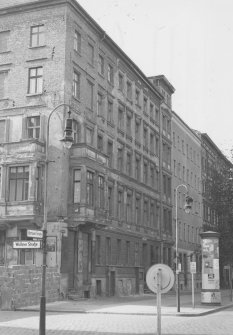 Bernd Lünser: Bernauer Strasse 44, Bernd Lünser fell from the roof to his death, Oct. 5, 1961 (Photo: Polizeihistorische Sammlung/Der Polizeipräsident in Berlin)
When the guards began to pursue him, Bernd Lünser called out loudly to West Berliners who happened to be passing by on the street below. "Help me. I want to jump!" he cried from high above. They notified the sector patrols of the West Berlin police. Meanwhile on the other side of the street the first shots were fired. A short time later, firemen were prepared to catch the young man in their rescue net, but Bernd Lunser and one of his pursuers entered into a scuffle on the roof of the building at Bernauer Strasse 44. [4] They both slid to the edge of the roof. Bernd Lünser was able to break free and jumped to the ground, but he missed the firemen’s rescue net by a few meters and hit the concrete with full force. He died immediately.

The West Berlin police claimed they had not opened fire until they, as well as the firemen and residents, were endangered by the shots being fired from the other side. Hence their use of firearms was justified. [7] The West Berlin Chief of Police, Erich Duensing, strongly commended his officers for striking back at the right moment. [8] A speaker of the U.S. State Department also argued that the West Berlin police had been forced to defend themselves and demanded that the Soviet Union prevent any more shootings at the sector border. [9]

Proceedings, opened in 1990 against the border guards involved in the shooting, were unable to determine who had fired the first shot. The defendants were consequently found not guilty. Later research proved false the belief that there had been another fugitive with Bernd Lünser on the roof who had also died. [10] This false theory had been based on West Berlin eye-witness accounts that were noted in police and press reports and cited for many decades. 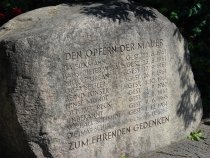 Bernd Lünser: Memorial stone on Bernauer Strasse in Berlin-Wedding (photo: 2005) (Photo: Hans-Hermann Hertle)
The exchange of fire on Bernauer Strasse evoked strong outrage in both the East and the West, but only West Berlin was concerned with publicly commemorating the death of Bernd Lünser. Many West Berliners sought out the place of his death and placed flowers there. Later, students who had known Bernd Lünser from the university placed a wooden cross on the site that, like the memorials to other victims of the Wall, was wrapped in barbed wire. [11] Bernd Lünser was buried on October 11, 1961 at the cemetery on Bergstrasse in Steglitz, a West Berlin district. The East Berlin authorities denied his mother permission to attend the funeral service. Instead she expressed her sadness in a telegram that was read out loud at the grave. [12]