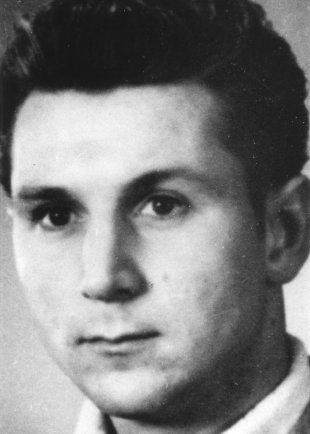 in the Spree River near the Schilling Bridge
at the sector border between Berlin-Friedrichshain and Berlin-Kreuzberg
On the evening of October 14, 1961, the 25-year-old East Berliner went to the Spree not far from his parents` apartment and entered the water beneath the Schilling Bridge with the intention of swimming to the West Berlin bank on the other side.Born and raised in Berlin, Werner Probst was 25 years old when he tried to flee to the western part of the city in October 1961. He lived with his parents in the Friedrichshain district and worked as a driver for a state-run company. Before the Wall was built he had worked for a West Berlin transport company. Werner Probst, however, was not a typical border-crosser. Beginning in February 1959, the Ministry of State Security maintained him as a so-called secret informant ("GI") under the code name "Harry." [1] Information about the background, lifestyle and political views of this Stasi informer was found in a file entry documenting his spying activities. [2]

When Werner Probst agreed to work with the Stasi, he had no job training and could barely write. Evidently, he quit school early and had been caught stealing as a youth. [3] As was common practice by the East German secret police, his criminal record was used as the "basis for his recruitment." [4] His case officer wrote that by working as an informant for the Stasi, Werner Probst could "make up for his past mistakes and have his punishment revoked." [5] Moreover, the Stasi was interested in the contact "to shady characters" that he supposedly had in the so-called demimonde and criminal world in both halves of the city: "Since the GI has a lot of acquaintances in the underground," the recruitment report stated, "he will be assigned to provide tips and shed light on these people." [6] After being hired as a secret informant, Werner Probst began hanging out with border-crossers, prying on racketeering and reporting regularly on the people he met in the West Berlin bars. It appears that his cooperation with the Stasi was motivated less by ideological convictions and more by an interest in gaining a personal advantage. He earned desirable western currency for his spying activities and enjoyed a degree of freedom of movement.

When the Berlin Wall put an end to this, Werner Probst could not or would not accept the new situation. He was temporarily arrested just three days after the barriers were erected when he was found trying to enter West Berlin at the Friedrichstrasse Station border crossing while inebriated. The Stasi responded to this incident with a threat: "The next time he’s arrested the contact with us will be broken." [7] His case officer suggested that Werner Probst be placed as an informant in the West and was able to keep him in line for a while. [8] But when this plan was dropped because he lacked the qualifications for an apprenticeship in encryption, Werner Probst apparently saw no further reason to stay in East Germany. [9] According to his Stasi file, the State Security believed he had difficulties accepting that he could no longer travel to West Berlin and his "border breach" was mainly motivated by his desire to get to his savings held in a West Berlin bank account. [10] Whether this accurately depicted his motivations is not known since he left behind no explanation of his actions.

On the evening of October 14, 1961, the 25-year-old East Berliner went to the Spree not far from his parents` apartment and entered the water beneath the Schilling Bridge with the intention of swimming to the West Berlin bank on the other side. Border police who were guarding the river from the bridge noticed him at around 10:30 p.m. One of the guards illuminated the water surface with a spotlight while the other two set off signal and warning shots before opening fire on the swimmer. [11] Werner Probst made it to the exit ladder on the West Berlin quay wall. Injured on his thigh and in his head, he pulled himself up the ladder steps before collapsing, fatally injured. His violent death was documented in a matter-of-fact military tone: "When the person reached the ladder, shots were fired. P. was hit and collapsed directly onto the bank of West Berlin territory. At this moment the water police who had been notified arrived, pulled the border violator from the embankment and brought him by boat to the Oberbaum Bridge. The individual was already dead on arrival." [12]

The nighttime shots on the Spree bank in Kreuzberg were also registered by the West Berlin police, but it was not immediately clear to them what had happened. [13] Within a few days enough evidence had been gathered to lead them to conclude that the shots had been directed at a fugitive fleeing the East. Werner Probst’s half-sister, who lived in West Berlin, told the authorities what she had learned from his parents. They were informed on October 16, without place or time being specified, that their son had been shot and killed while attempting to flee. His parents’ request to see him before his burial was refused. [14] Border guards who later deserted to the West made statements that finally provided conclusive information connecting Werner Probst’s death to the shots fired at the Schilling Bridge. On the basis of this information, in October 1961, the West Berlin police placed charges of homicide against unknown members of the East German company of the 1st Border Brigade that was stationed in this area. [15]

Thirty years later the case was re-opened and three former border guards were identified as the alleged perpetrators. The public prosecutor’s office initially regarded the crime as murder committed out of base motives since the victim had already reached the western bank at the time of his death, but in the end the men were charged with joint manslaughter. [16] The district court of Berlin found the three defendants guilty of this charge in May 1995. The question of which of them bore responsibility for firing the fatal shot that killed Werner Probst could not be clarified during the trial. As was the case in most of the border guard trials, the court sentenced the defendants mildly, since they had committed the act "on the basis of an – albeit obviously unlawful – order within a command hierarchy in which they stood at the very bottom." [17]