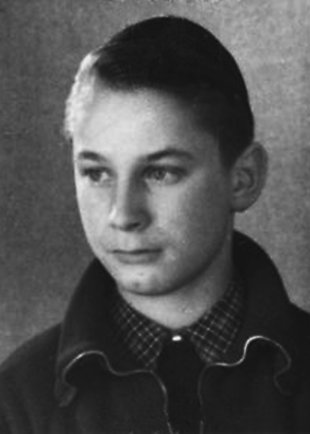 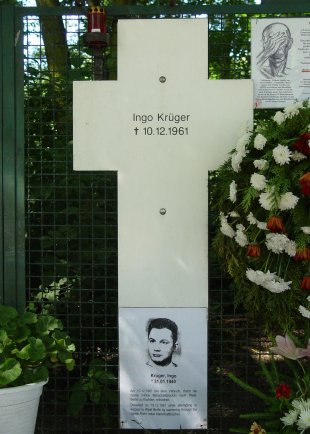 On Saturday, August 12, 1961, Ingo Krüger and Ingrid R. spent the night with friends in East Berlin. Afterwards, they stayed overnight in the fiancée's apartment in West Berlin. Unaware of the lockdown measures, Ingo Krüger drove back to the eastern sector in the early morning hours to start his Sunday shift at the GDR government guest house. Ingrid R. later recalled that there had been a banquet there in the morning for high-ranking party and state functionaries, including Walter Ulbricht . [5]

The border closure measures meant that from now on Ingo Krüger and Ingrid R. were separated from one another. They continued to find ways to see each other and made dates at remote areas at the edge of the city where they could exchange letters and presents through the barbed wire. But over time these meetings became more difficult to organize and Ingo Krüger was even temporarily detained once on his way to one of their meetings and was warned that he should stay away from the border. [6] To continue seeing each other they developed a new strategy. Ingrid R. registered her permanent address with relatives in West Germany because – unlike West Berliners – West Germans were allowed to travel to East Berlin even after the Wall was built. [7] After that she was able to visit her fiancé again. But when the couple realized that the closed border was becoming a permanent situation, Ingo Krüger began preparing his escape. 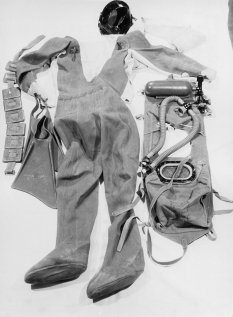 Ingo Krüger: MfS photo of diving equipment [December 1961] (Photo: BStU, MfS, AOPK 20505/62, Bd. 2, Bl. 359)
Since he was an experienced skin diver, it seemed a good idea to escape through one of the many border waters with the help of diving equipment. Apparently a lot of people had had a similar idea because the number of people joining diving clubs in East Berlin skyrocketed after August 13, 1961. [8] Ingo Krüger began preparing his escape in early November and observation reports show that Stasi agents were watching his every move. [9] His escape route was to begin in the city center and continue across the Spree River to the Reichstag building. A number of his friends helped him to prepare and his fiancée was also in on the plan. At around 11 p.m. on December 10, 1961, Ingo Krüger took a taxi with two friends to the Spree bank at Schiffbauerdamm. He was already wearing his diving suit under his coat. A friend who monitored boat traffic on the Spree was waiting for them. She advised him to enter the river beneath the Friedrichstrasse train station to avoid the East German customs boats that assisted in guarding the border. [10] This way the boat crew would not see him. Ingo Krüger put on his scuba and entered the water. His friends stayed on the embankment and tried to keep an eye on him in the water, but they soon noticed that something had gone wrong.

Meanwhile Ingrid R. was waiting in vain on the other side of the West Berlin bank. She watched in horror as East German customs officials began searching the water with hooks and spotlights. They eventually pulled a body out of the water and onto the boat. [11] Despite the poor visibility, Ingrid R. was certain that the body belonged to her fiancé and that his escape attempt had failed. She was still hoping that he had survived the ordeal, but according to Berlin border police reports, the 21-year-old fugitive was already dead when they retrieved him from the water near the Marschall Bridge. [12]This meant that December 10 was the date of his death. But according to the corpse entry book of Humboldt University’s Institute of Forensic Medicine, Ingo Krüger died on December 11 at 12:10 a. m. [13] The autopsy book registered the cause of death as "presumably death by drowning." [14]

The GDR authorities told Ingo Krüger's parents and colleagues that his fiancée and friends who had helped him prepare his escape were to blame for his death. [15] One of his friends was arrested for aiding and abetting "flight from the Republic"; another was blackmailed into cooperating with the MfS. [16] . At the time of the funeral on December 23 at the East Berlin cemetery on Baumschulenweg, Ingrid R. still did not know what had happened to her fiancé. Letters she sent to Ingo Krüger’s mother remained unanswered for weeks. The terrible truth finally reached her in a roundabout way in January. [17]

Ingo Krüger: Found dead at the Marschall Bridge (MfS photo, 1961) (Photo: BStU, MfS, AOPK 20505/62, Bd. 2, Bl. 363)
The exact circumstances of Ingo Krüger’s death remain unclear. Theories that he died violently could not be confirmed. The Stasi investigation came to the conclusion that "K[rüger]’s death was brought about by a failed (breathing) instrument." [18] But investigations carried out in the 1990s as part of the legal prosecution of violence at the Wall and border established that he died on that December night as the consequence of a cold shock. [19]