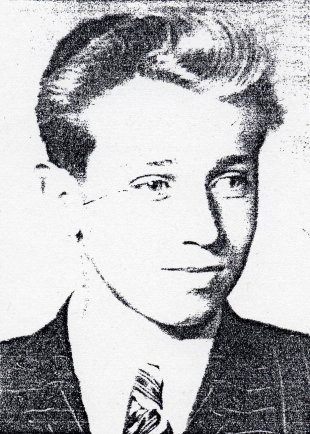 in the Teltow Canal, near the Massante Bridge
at the sector border between Berlin-Treptow and Berlin-Neukölln

A West Berlin customs official made a ghastly discovery while doing his rounds on the Teltow Canal on Sunday, March 11, 1962: The body of a young man was floating in the water near the Späth Bridge in Britz in Neukölln. The other side of the canal formed the border to the Soviet sector. The corpse was wearing the uniform of an East German border policeman and had, it turned out, been in the water for weeks. The head and face were disfigured by injuries caused by ship propellers and beyond recognition, but West Berlin newspapers cited police information that the death was caused by drowning and that there was no evidence of violence. [29] The West Berlin authorities also publicized the identity of the dead man: His name was Georg Feldhahn. He was 20 years old when he died and had been serving in East Berlin’s 1st Border Brigade.

Although it seemed logical that the young man had died while trying to escape, West Berlin authorities were unable to confirm this at the time. [30] Contact between East and West Berlin had been frozen ever since the Wall was built, hence it was not possible to make inquiries to the authorities on the east side of the city. [31] Officials even contacted West Berlin relatives in an attempt to get in touch with members of the deceased’s family, but were unsuccessful. Consequently, the background and circumstances of his death remained unclarified until the East German state collapsed. It was later revealed that Georg Feldhahn did, in fact, die while trying to desert from the military.

The documents that he filled out before signing up to serve at the border show that Georg Feldhahn was born during the war in 1941 in Friesack in the Havelland and grew up in that rural region west of Berlin. [32] He never knew his biological parents. He wrote that his father died in the Buchenwald concentration camp in 1942. As far as is known, he was separated from his mother at the age of four months and placed with his older sister in an orphanage. [33] After the war the siblings were adopted by foster parents who brought them to their home in the small town of Buschow. After completing school Georg Feldhahn trained to operate a tractor at a state-run farm before he was recruited at the age of 18 to enlist with the East German border police. He committed to a three-year service during the recruitment interview at the East German police district office in Rathenow. The protocol notes that he expressed a readiness to be transferred and expressed the wish to serve his duty in Thuringia. According to his own statements, he did not have any relatives outside of East Germany. [34] His service was to begin in September 1959, but instead of being assigned to Thuringia, he became a member of the border units stationed at Gross-Glienicke in Seeburg, an area bordering the West Berlin outer district of Spandau. After the Berlin Wall was built, Georg Feldhahn was transferred from the outer border to the inner-city sector border where he joined the 6th Border Brigade that operated in the south of the city between the Treptow and Neukölln districts. [35]

Desertion was not uncommon during the first weeks and months after the Wall was built. Hundreds of border guards used their duty at the border grounds to turn their backs on East Germany. Stasi reports registered a total of 28 cases of desertion to West Berlin in just the first two weeks of October 1961. [36] West Berlin explicitly encouraged the border guards to take that „leap to freedom." Using loud-speakers and fliers, the „Studio at the Barbed Wire," a radio station of the West Berlin Senate, encouraged them to refuse to obey the communist regime. One of their appeals was, „Don’t let yourselves be buffaloed. Trust your feelings for the freedom of each individual. Don’t let yourselves be pressed into the mold of your system." [37]

The official documents do not shed light on what led Georg Feldhahn to undertake his escape attempt. It also remains unclear whether his flight was a spontaneous act, as the Stasi presumed, for lack of any other indications, or whether it was a decision planned long in advance. He had not drawn any attention to himself before the day of his escape. The Stasi informants in his unit had not been aware that he was planning an escape nor that he had contact with people living in the West. The files merely assert that before reporting to duty on the day in question, Georg Feldhahn had been drinking in the city with two comrades. [38] His shift at the border strip began at 9 p.m. near the Massante Bridge on the bank of the Teltow Canal. Around 10 p.m., on orders from his duty leader, he inspected the signaling device on the barbed wire fence, but never returned to his post. Instead he gradually approached the bridge that led to West Berlin. When he noticed that he was being observed and followed, he fired a number of shots from his machine pistol without hitting anyone. Then, before return shots could be fired, he disappeared.

Given the available evidence, the East Berlin investigators assumed that the fleeing man had successfully crossed the canal near the pipes running beneath the bridge. [39] The unit commander was quoted in the final report as having criticized the other guards for behaving too passively „instead of confronting the traitor and possibly employing firearms." The Stasi also focused extensively on the „question of the unit’s guilt" and claimed that „F. could have been shot without difficulty before he crossed the canal." [40] Doubts about the success of Georg Feldhahn’s escape did not arise until the next spring when West Berlin newspapers reported on the body retrieved from the water. It would appear, the Stasi wrote, that he fell into the canal while trying to escape and drowned in the freezing water. [41]

Nothing more was entered into the files held in the Stasi and border troop archives. The East German authorities did not disclose any other information about the case. Thus the fate of Georg Feldhahn remained unsolved for decades and was ultimately forgotten. Even his sister did not learn about his death until the nineties. [42] It is not known whether his foster parents, who have by now passed away, ever knew what had happened to their son.