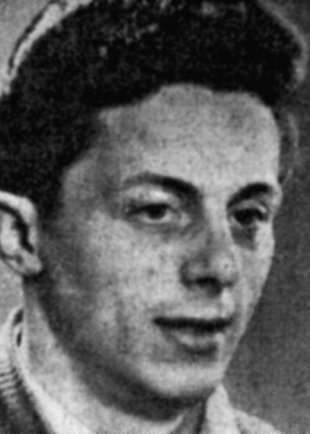 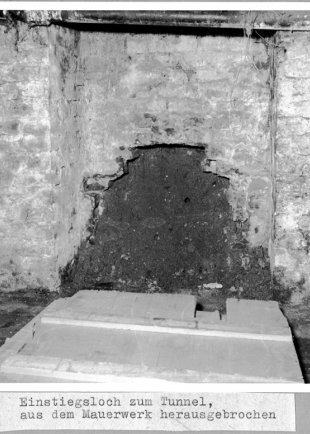 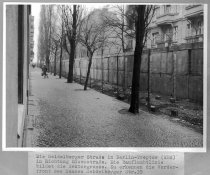 Heinz Jercha: The Wall at Heidelberger Strasse between Berlin-Treptow and Berlin-Neukölln [March 27, 1962] (Photo: Polizeihistorische Sammlung/Der Polizeipräsident in Berlin)
Escape operations, criticized and prosecuted in East Germany as „human trafficking," experienced their „heyday of heroism" in West Berlin during the first years after the Wall was built. They were supported by the authorities and the population in many ways. [3] Heinz Jercha was the second person following Dieter Wohlfahrt to be shot at the Wall while trying to help others to escape and his death triggered strong expressions of solidarity and sympathy in the West. After his death, people everywhere demanded that Jercha’s widow and five-year-old daughter be provided for by the Senate and the authorities responded to these demands by granting the family of escape agents who were killed the same status as relatives of someone who died in war: They were henceforth entitled to a small pension. [4] Representatives of the federal government, the Senate and West Berlin districts paid their last respects by attending his funeral on April 5 at the Wald Cemetery in Zehlendorf. [5]

The circumstances under which Heinz Jercha died remained unclear for a long time. The East German leadership denied any responsibility and kept the files that proved that the escape agent was shot by a member of the Stasi under lock and key. [6] West Berlin police investigations determined that Heinz Jercha was together with Harry Seidel on the evening of March 27. Seidel, along with Fritz Wagner, was one of the key players in the early escape operations. They had joined forces in early 1962 to build the tunnel in Heidelberger Strasse. [7] But unlike Fritz Wagner, who had offered his escape services to East Berliners for money, Seidel acted out of personal and idealistic reasons. Heinz Jercha stumbled onto the operation through Wagner’s broad professional network and helped Seidel with the excavation work. [8] When they completed the tunnel, Jercha and Seidel took on the risky task of picking up the escape candidates at the East Berlin end of the tunnel each evening and leading them back to West Berlin. They acted cautiously, and Seidel later admitted to the West Berlin police that they were armed with pistols for their own protection. [9] Seidel also had contact with an escape operation run by students and, without Wagner’s knowledge, he and Jercha were also using the tunnel to bring other young East Berliners to the West. [10] During one of these operations Heinz Jercha got into a conversation with two East Berlin students to whom he had given a ride in his VW Beetle after their successful escape. They asked him if he would help a friend of theirs who desperately wanted to leave East Germany, and they offered to pay him money. Jercha agreed. [11] 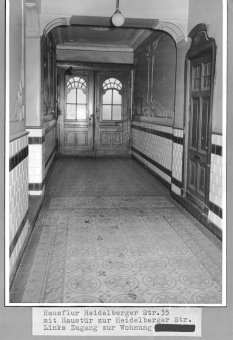 Heinz Jercha: Entrance to the building on Heidelberger Strass from where the tunnel was dug [March 27, 1962] (Photo: Polizeihistorische Sammlung/Der Polizeipräsident in Berlin)
The escape tunnel had meanwhile been betrayed by an East Berlin resident who had won Seidel’s trust. Seidel had no idea that the man worked as a Stasi informant under the code name „IM Naumann," but this was how the Stasi found out about the escape operation on March 24. They developed an „operative plan to liquidate the tunnel," with the main aim of arresting Harry Seidel, who they believed was the „organizer of the trafficking operation." [12] As of March 25, Stasi agents were on the lookout in the basement of the East Berlin building where the tunnel ended.

On the evening of March 27, Seidel and Jercha successfully led an elderly couple through the tunnel unnoticed. Afterwards the Stasi arrest commando was given the order to take action as soon as Seidel appeared. The Stasi officer in charge later wrote “the comrades were to sharpen their knives for this one" and he added emphatically that what he meant was “they were to have their guns ready and if necessary, use them." [13] Seidel and Jercha returned a short time later to carry out the escape operation that Jercha had organized on his own initiative in agreement with the two students. Seidel later put on record that when they reached the East Berlin side, he had waited on the basement stairs while Jercha went upstairs to meet the fugitives in the building corridor. [14] But instead the Stasi arrest commando was waiting for him. According to the Stasi files, one of the men ordered him to surrender, at which point he shone his flashlight into their eyes and without a struggle quickly ran away. The Stasi men opened fire immediately and chased him but they were unable to stop either Jercha or Seidel from escaping through the tunnel to West Berlin. One of their bullets, however, ultimately killed Heinz Jercha. The autopsy found that it was a ricochet shot that hit him in his chest, wounding him fatally. [15]

After the East German archives were made accessible in the nineties, an investigation was opened against the four Stasi agents who were identified as having shot Heinz Jercha. In this case, however, narrow limits were placed on the legal prosecution because the court conceded that at the time their intention had been to arrest a West Berliner who had illegally entered the territory of East Germany. Given this fact, the use of firearms that led to Heinz Jercha’s death could not be penalized as homicide. The proceedings were dropped without an arraignment. [16] A memorial plaque on Heidelberger Strasse today recalls the fate of Heinz Jercha.