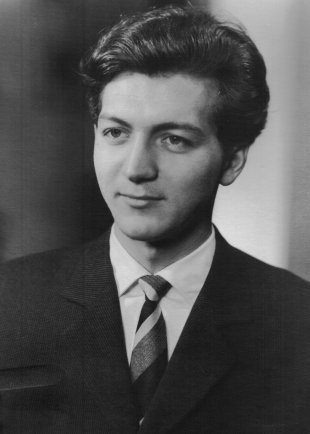 in the Spree River
probably at the sector border between Berlin-Friedrichshain and Berlin-Kreuzberg
In the end he felt he had no other choice but to risk trying to flee, and his last letter to his mother contained a vague hint of this intention. His girlfriend and landlord were also informed of his intention without knowing any details. When he disappeared on April 8, they assumed that his escape had been successful.Philipp Held was born on May 2, 1942 in Worms am Rhein in West Germany. He had a sheltered childhood there, but it was overshadowed by the early loss of his father who had died in a car accident in 1955. After finishing school, Philipp Held trained to become an electrician. After this he began studying engineering. His mother was proud of her only son. But his mother opposed his friendship with Bärbel W., whom he met when he was 19, and after this point the mother and son began to have disagreements. Philipp Held and his 16-year-old girlfriend felt misunderstood and patronized. They made an unusual decision that would have grave consequences. Without telling their parents, they drove to the inner-German border in September 1961 and got out in East Germany near Helmstedt. Bärbel W. had grown up there until she fled to the West with her mother in 1956. [1] At the border they both announced their desire to resettle in the East. They had to go through the admissions procedure at the Barby Reception Camp near Magdeburg. They were examined and registered as a „new arrival" and „repatriate," according to the official East German terminology. [2] Afterwards they were permitted to move to Eberswalde in the north of Berlin where Bärbel W.’s father and other relatives lived.

But Philipp Held and his girlfriend had a hard time adjusting to the living and working conditions in East Germany. Moreover, they were not exactly greeted with open arms in Eberswalde. They felt controlled and reprimanded by adults there, too. Not long after their arrival, they wrote letters to their parents in the West that suggest that they already regretted their move to the East. [3] It was not until then that the couple seemed to realize that with Germany now divided by the Wall, the way back was not open to them. During a visit to East Berlin they realized that the border was „dreadfully guarded and walled up." [4] In desperation, they began looking for a way out. Since Bärbel W. was still a minor she tried to obtain an exit permit from the East German authorities. For Philipp Held, who according to East German law was of full age and who already had vocational training, the application seemed hopeless. From the point of view of the East German state, both economic and ideological arguments spoke against allowing the young qualified male worker who had moved from the capitalist West to leave again. The situation escalated when, in January 1962, East Germany introduced general conscription and Philipp Held worried about being drafted into the National People’s Army. He feared that as a soldier entrusted with confidential information, he would never be allowed out of the walled-up country. In the end he felt he had no other choice but to risk trying to flee, and his last letter to his mother contained a vague hint of this intention. [5] His girlfriend and landlord were also informed of his intention without knowing any details. When he disappeared on April 8, they assumed that his escape had been successful. It was only after they did not hear from him for a number of days that they began to worry.

Members of the East German border police noticed the body of Philipp Held in the Spree River on April 22, 1962. All evidence suggests that he drowned while trying to swim from the grounds of the Osthafen Harbor in Berlin-Friedrichshain to the West Berlin bank on the other side. The report written by the border police unit on duty that night stated that „the body floating towards the Oberbaum Bridge was retrieved from the water by the water police at the Schilling Bridge around 6 p.m. […]. The body belonged to Held, Philipp […] H. had his identity papers in a cellophane bag on him." [6] The fact that the deceased had identity papers wrapped in a waterproof bag with him was a clear indication to East German authorities that they were dealing with an „attempted border breach." Further investigations determined that at the time of retrieval, Philipp Held had been floating dead in the water for approximately ten days. His corpse had gotten caught in the wire of an underwater barrier. Since no bullet wounds were found on the body, the East Berlin investigation office assumed that the deceased had drowned. [7]

The actual circumstances of his death were never clarified. Neither the authorities in the East nor those in the West, nor friends or relatives, were able to find out exactly how, when and where Philipp Held had died.

The East Berlin prosecuting authorities waited a number of days before informing his mother that they had retrieved her son’s body from the water. The official letter dated April 26, 1962 stated succinctly that her son had been killed in an accident. She tried, with the help of authorities in Worms, to have her son’s body delivered to her. She then found out, to her great dismay, that her son’s human remains had been cremated without her permission. She strongly mistrusted the official statements coming from the East German authorities and suspected that they were trying to conceal a violent crime. She turned to the West German press to have her view made public, which is how the rumor started that Philipp Held had been shot. The „Bild-Zeitung" ran the headline „Pankow tried to cover up the act." It reported that there was hardly any doubt of the fact that Philipp Held „was murdered by Ulbricht’s border guards." [8] When the Berlin public prosecutor’s office re-opened the investigation in 1990, it was unable to confirm this theory. [9] All the available documents support the view that Philipp Held had drowned while trying to escape in April 1962.