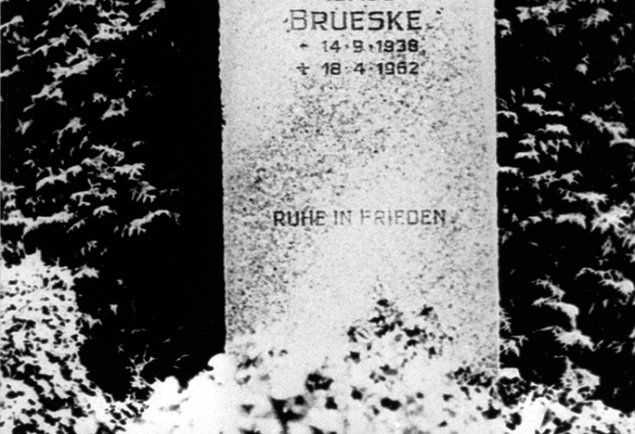 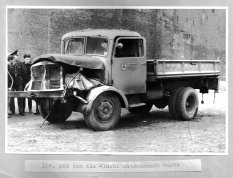 Klaus Brueske: West Berlin police photo of the escape car [April 18, 1962] (Photo: Polizeihistorische Sammlung/Der Polizeipräsident in Berlin)
On the night of April 17, 1962, three young East Berliners undertook a daredevil escape attempt: They tore through the obstacles at the Heinrich-Heine-Strasse border crossing with a truck. Amidst a hail of bullets from the East German border guards, they managed to break through to the West Berlin side. Two of the passengers got away with mere injuries, but the 23-year-old Klaus Brueske, who was driving the escape car, was fatally injured. The next day a West Berlin newspaper ran the headline „He died driving them to freedom." [21] The East German press presented the circumstances that led to Klaus Brueske`s death in a very different light. „Neues Deutschland" reported that they were „shot while breaching the border" and added that „on April 18, 1962 a certain Klaus Brueske was shot and killed while violently breaking through the border. His act placed the lives of members of the border security organ in extreme danger." [22]

Klaus Brueske was born on September 14, 1938 in Berlin, the fifth of eight children. He had spent his entire life in the Friedrichshain district, which had been part of the Soviet sector since 1945. After quitting a masonry apprenticeship, he became a driver. Beginning in January 1961 he found employment at the AEG where his father also worked. The company was located on the west side of the city, and he commuted every day between East and West Berlin. When the border was sealed on August 13, 1961, his father chose to remain in West Berlin, but Klaus Brueske was reluctant to give up his familiar surroundings in the East. He found a new job in the East as a driver for the same company where his older brother worked. [23] Over the following weeks and months, however, his friends grew increasingly discontent with the situation in East Germany. They began to discuss possible ways of escaping and explored the border area. Over time a plan to break through the border crossing at Heinrich-Heine-Strasse with a truck began to take shape. No fewer than seven young men wanted to participate in the escape. [24] 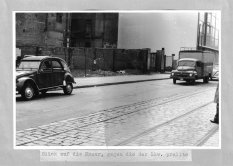 Klaus Brueske: West Berlin police photo of the place at the Wall where the truck came to a halt in the West [April 18, 1962] (Photo: Polizeihistorische Sammlung/Der Polizeipräsident in Berlin)
Klaus Brueske borrowed a truck from the company on April 17, 1962, claiming that he had to move. He loaded the truck with sand and gravel in order to increase the vehicle’s ability to break through the Wall. That evening he met his friends in a bar, and later Peter G. told western authorities how they had spent their last East German money and gotten drunk „in an atmosphere of morbid humor." [25] When the seven youths left the bar they were startled when an East German policeman addressed them. Even though the policeman did not seem at all suspicious, they decided to separate for a while and meet at the truck again later that night. Only three of them showed up at the designated time. They waited a bit before leaving without the others. Klaus Brueske sat at the wheel, Lothar M. was in the passenger seat next to him and Peter G. lay down on the back of the fully-loaded truck platform.

It was past midnight when the young men raced through the border crossing at a speed of 70 km/h. As the truck broke through the first and second barriers, border guards aimed two bursts of fire at them, firing 14 shots altogether. The vehicle was hit many times but continued to speed across the border line, not stopping until it collided with a property wall on the West Berlin side. [26] The three fugitives were brought to the nearby Urban Hospital and treated for injuries and wounds. But for Klaus Brueske the help came too late. The autopsy report states that two shots through the back of his neck did not kill him immediately, but led him to lose control of the vehicle. Upon impact with the property wall he was buried in sand and suffocated painfully. [27]

The border guard who fired the shots was held accountable for his actions forty years later. In April 1994 he was found guilty of manslaughter coinciding with attempted manslaughter and sentenced to one year and two months probation. [28] 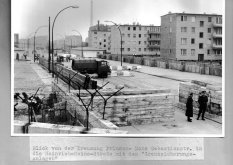 After a second person, Heinz Schöneberger, was killed at Heinrich-Heine-Strasse in December 1965, a West Berlin group called „Working Group 13th of August" erected a wooden cross there in March 1966. Photographs of Klaus Brueske and Heinz Schöneberger were placed next to the cross. [29] Memorial services take place at the memorial each year on the anniversary of the day the Wall was erected. [30] 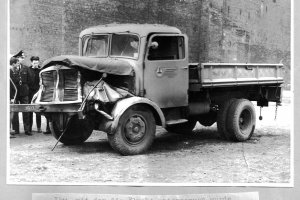 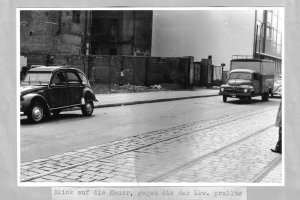 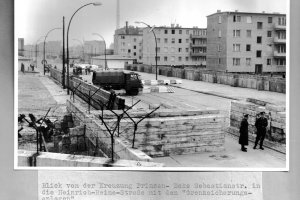