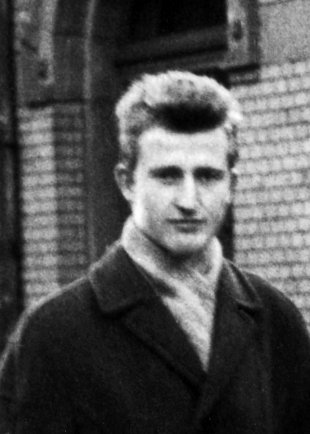 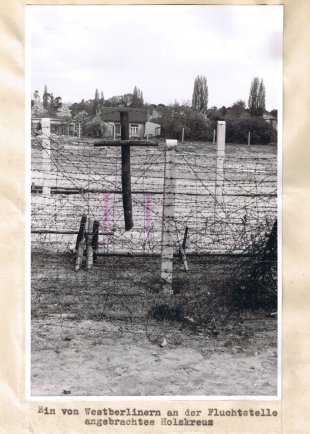 The East Berlin border report documents the violent death of the young man, but gives little impression of what actually transpired between two fugitives and three border guards. When Horst Frank was shot that night he was very close to reaching his goal. He and Detlev W. had been crawling through the border strip for four hours. They had both managed to reach the last barrier, a three-layered barbed wire fence, without being noticed. His friend was lucky. The two border guards did not see him and he was able to escape to West Berlin. But they did discover Horst Frank. From a distance of 20 meters, they opened fire on the fugitive lying on the ground. When a third border guard was alerted by the shots, he also began firing at the 19-year-old, who was hopelessly tangled in the barbed wire. Horst Frank was hit three times. A bullet penetrated his stomach and lung, causing him to die shortly thereafter. [3] 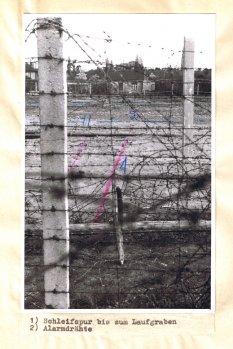 Horst Frank: West Berlin police crime site photo of the border fortifications with markings of escape attempt between Pankow and Reinickendorf marked [April 29, 1962] (Photo: Polizeihistorische Sammlung/Der Polizeipräsident in Berlin)
The court that tried the three guards many years later was unable to determine who had fired the fatal shot. Nevertheless, all three men were found guilty of joint manslaughter and handed down probation sentences ranging from one and a half years to one year and three months. [4]

Horst Frank came from Saxony. He was born on May 7, 1942 in Lommatzsch. After completing a gardening apprenticeship, he moved to East Berlin just a few months before the Wall was built. He worked for a state-owned horticultural company in the Weissensee district and shared an apartment with other workers in a company dormitory. While visiting his parents in Lommatzsch over the 1962 Easter holidays, he got into a conversation with Detlev W., who was two years younger. The young men had known each other since childhood and found that they shared something in common: They both wanted to leave East Germany. [5] Detlev W. later put down on the official record that his main reason for leaving was to meet his biological father who lived in the West. He did not disclose what his friend’s reasons for leaving were. A general conscription had been introduced in East Germany in January 1962 and the fact that Horst Frank was soon to be recruited into the National People’s Army is likely to have played a decisive role in his decision to flee. His military summons to attend his medical examination, dated March 23, 1962, was one of the few things that Horst Frank had on him when he was shot. [6]

The two friends agreed to flee together. They met a week later, on April 28, 1962, in East Berlin to carry out their plan. Horst Frank had already checked out a spot on the sector border in Berlin that he thought was suitable for an escape attempt: the Schönholz garden settlement that bordered the West Berlin district of Reinickendorf in the north of the city. Equipped with wire cutters, they waited until dark before approaching the border grounds. Detlev W. recalled that they cut through the interior wall and found themselves within the border strip, an open field that was approximately 80 meters wide. Horst Frank had evidently prepared the escape well. Instead of hectically running off, they remained on the ground and crept forward slowly and cautiously. They often stopped and ducked to avoid being seen by the border guards. They noticed a trip wire in time and were able to get past it without triggering an alarm. When Detlev W. reached the border fence, he suddenly heard shots, but did not realize that his friend was caught in the barbed wire and had been hit. The border guards’ shots were also heard on the other side of the border fence. Residents, police officers and members of the French military police watched as the seriously wounded fugitive was transported away. Since Horst Frank had not shown any signs of life, the people in the West assumed that his wounds had been fatal. Residents erected a wooden cross at the site the next day. [7]

In fact, Horst Frank died shortly after he was pulled out of the barbed wire fence. But that did not hinder the East German authorities from charging him with an „attempted border breach." The files of the Ministry of State Security show that an arrest warrant for the severely wounded young man was immediately requested, leading to his transfer to the prison division of the People’s Police Hospital and the preparation for his immediate interrogation. [8] Frank never regained consciousness and died that very night.

The Stasi waited four or five days before informing his relatives of his death and releasing the corpse to them. [9] The funeral took place in Lommatzsch on May 12, 1962.