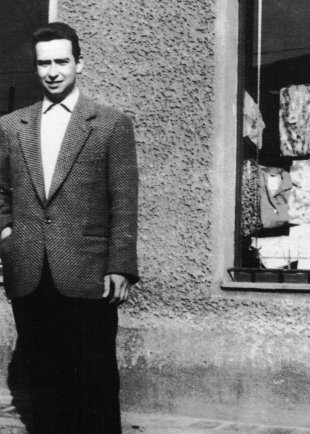 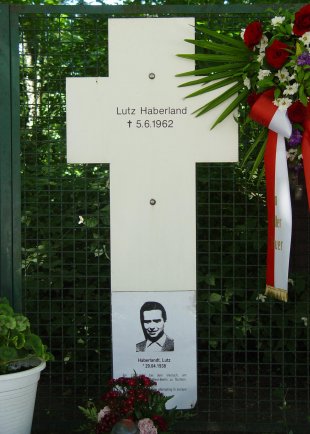 on the Alexander embankment near Charité Hospital
at the sector border between Berlin-Mitte und Berlin-Tiergarten
Lutz Haberlandt was probably not totally sober when he headed for the inner-city later that afternoon and entered the grounds of Charité Hospital, situated directly on the border. At about 4 p.m. two transport policemen, who were guarding the area from a nearby railroad bridge noticed him there.The East Berliner Lutz Haberlandt chose to flee to the western part of the city on a Sunday. It was a sunny day and unusually warm for that time of year. On the same day, May 27, 1962, the mayor of Berlin, Willy Brandt, called on the West Berlin population to stay calm. There had been an exchange of fire between an East Berlin border policeman and West Berlin police officers four days earlier that had caused quite a stir. A young fugitive was shot and the East German border policeman Peter Göring was fatally wounded. Despite demands from politicians in the West for the shootings to stop, the violent attacks on people fleeing did not cease. Lutz Haberlandt was shot and killed when he tried to escape.

Lutz Haberlandt, shot dead at the Berlin Wall: West Berlin police crime site photo of the Charité hospital grounds between Berlin-Mitte and Berlin-Tiergarten [May 27, 1962]Born in Berlin in 1938, Lutz Haberlandt, the second of three children, grew up in the Prenzlauer Berg district. After eight years of schooling he completed a bricklaying apprenticeship after which he worked as a mason. His father is believed to have worked in West Berlin before the Wall was built and, according to the Stasi file on the family, they had a number of relatives in the West. The Stasi categorized Lutz Haberlandt as “indifferent to politics,” which suggests that he was not a supporter of the communist regime. [1] At the age of 24 he was still living with his parents on a street that was then called Dimitroffstrasse, today’s Danziger Strasse. That particular Sunday he left his home around noon and went to a local bar. He had a beer and got into a conversation with a friend whom he happened to have met there. Questioned by the Criminal Investigation Department later, the friend denied knowing anything about his friend’s plans to escape and stated that he had left the bar drunk and gone home. [2] Lutz Haberlandt’s parents also told the Stasi during an interrogation that they had no idea that their son was planning an escape, nor did they know what had motivated him. [3] 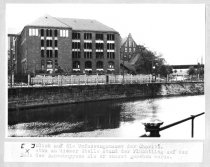 Lutz Haberlandt: West Berlin police crime site photo of the Charité hospital grounds between Berlin-Mitte and Berlin-Tiergarten [May 27, 1962] (Photo: Polizeihistorische Sammlung/Der Polizeipräsident in Berlin)
Lutz Haberlandt was probably not totally sober when he headed for the inner-city later that afternoon and entered the grounds of Charité Hospital, situated directly on the border. At about 4 p.m. two transport policemen, who were guarding the area from a nearby railroad bridge noticed him there. [4] The two guards later recorded that they observed the young man as he climbed onto the roof of a shed, removed his jacket and shoes and lay down in the sun. After a while he suddenly jumped down from the roof and climbed over the property wall into the cordoned-off border strip. Other border guards posted about a 100 meters away on a tower of the courthouse on Invalidenstrasse also noticed the young man do this. After firing a warning shot, the border guard K. aimed two shots directly at Lutz Haberlandt from the tower. One of the bullets hit him in the head, penetrating his skull and causing him to collapse. Doctors, nurses and patients at the nearby Charité psychiatric clinic who had witnessed the scene said that he was left lying in the shrubbery for about forty minutes. [5] He was probably dead when the guards carried him away.

Other border guards had also fired shots to prevent him from escaping. A few bullets entered into West Berlin territory. Policemen on the west side returned the fire and a bullet grazed an East Berlin border guard’s helmet. East German propaganda claimed that the West Berliners’ use of firearms was a “severe provocation” and reacted as they had in the past with accusations and finger pointing.

A few days after Lutz Haberlandt’s violent death, the West Berlin police received anonymous tips that helped to establish the identity of the victim. [6] The information was provided by relatives of Lutz Haberlandt who lived in East Berlin. It was reported that the day after his death, East Berlin policemen and a state prosecutor appeared at his parent’s home at four o’clock in the morning to inform them of his death. The mother asked if her son had been shot, which they confirmed. Then they searched the apartment and pressured the parents into agreeing to have the corpse cremated. The funeral took place on July 8 at the Weissensee Cemetery.

Preliminary proceedings against the former border guards involved in the shooting of Lutz Haberlandt were opened in the nineties. It was determined without a doubt that the deadly bullet had been shot by Private K. He was sentenced as a young offender in March 1996 to a year and a half on probation. [7]