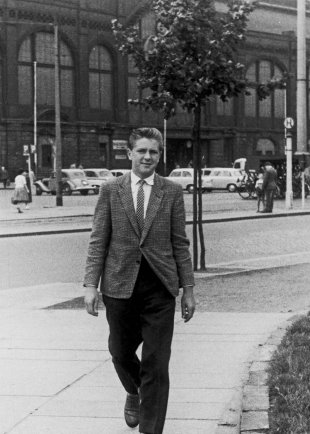 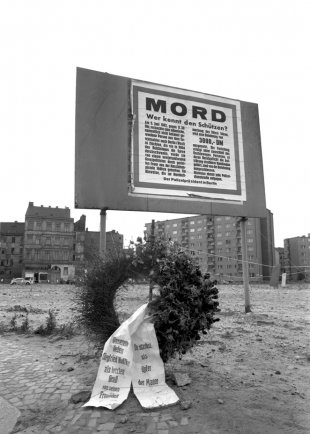 in the Spree River near the Reichstag building
at the sector border between Berlin-Mitte and Berlin-Tiergarten
It was 5 p.m. when the young man jumped from the bridge onto a barge that had already passed through the customs control and was heading to the West. But the ship captain refused to take the fleeing man with him. He instead stopped the ship and notified the customs and border guards.Axel Hannemann was born in Buchhain, Lusatia, in April 1945, just a few days before the war in Europe came to an end. He grew up with three siblings in Cottbus where his father worked in a general store. He was 17 years old, living with his parents and soon to begin an apprenticeship when he was shot and killed at the Wall while trying to leave East Germany on June 5, 1962. Later, in an account of her memories, his mother wrote that the news of his death was totally unexpected and deeply pained his parents and siblings. [1] 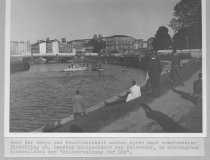 Axel Hannemann: West Berlin police crime site photo of the East German border police and firemen searching for Axel Hannemann in the Spree near the Reichstag building [June 5, 1962] (Photo: Polizeihistorische Sammlung/Der Polizeipräsident in Berlin)
They did not know what had led him to escape. They had not even known that he was planning to escape. Wolfgang Hannemann later said that he did not think it was for political reasons – his younger brother just wanted to have a better life and live differently. [2] His brother Jürgen thought that he might have been planning to go to his grandparents’ home in West Berlin. [3] In a farewell note that Axel Hannemann left his relatives, he asked them to try to understand his unexpected actions and added as a form of justification: „I have no other choice. I’ll explain my reasons to you when I have made it. But for now I can say that I have done nothing wrong." [4]

Axel Hannemann took a train from Cottbus to East Berlin on June 5, 1962. Upon reaching the city center he headed towards the Marschall Bridge, not far from the sector border which crosses the Spree River between Schiffbauerdamm and Reichstagsufer. This is where cargo ships with authorization to pass through East Germany went through customs control before proceeding to the West Berlin environs. It was 5 p.m. when the young man jumped from the bridge onto a barge that had already passed through the customs control and was heading to the West. [5] But the ship captain refused to take the fleeing man with him. He instead stopped the ship and notified the customs and border guards. Axel Hannemann got into a scuffle with the captain but was able to free himself. He jumped into the river and tried to swim to the West Berlin riverbank when two border policemen fired at him from close range. Just meters away from his goal, he was fatally hit and sank beneath the water’s surface. According to the autopsy report, he died from a bullet through his skull. It could not be determined with certainty how many bullets had hit him and how many had entered and exited his body. [6]

Two hours later East Berlin firemen pulled his dead body from the water. These events took place right behind the Reichstag building, which was situated on West Berlin territory. West Berlin police and members of the press soon arrived at the scene and photographed the body as it was retrieved and taken away. The next day West Berlin newspapers ran headlines such as „Murder of Fugitive at the Reichstag" and „Fugitive Shot and Killed in the Spree." 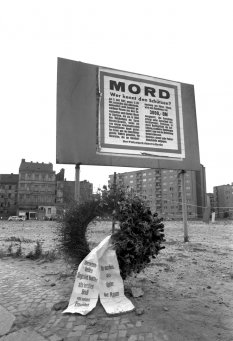 Axel Hannemann: West Berlin police wanted poster for the gunmen [June 1962] (Photo: Polizeihistorische Sammlung/Der Polizeipräsident in Berlin)
The strong reaction to Axel Hannemann’s death reflected the tense situation in the divided city in the summer of 1962. Incidents at the Berlin Wall were occurring in rapid succession, while the tone of the propaganda war between the East and West was growing increasingly aggressive. Military files show that the East German leadership investigated the victim and his family, hoping to be able to use the case for its own interests. Unable to find anything damaging on Axel Hannemann, they were confirmed in their suspicion that he had been attempting to „flee the republic." He had not been a „roamer," nor had he drawn negative attention to himself or attracted the attention of the East German police. Cottbus informed East Berlin that he had even taken dancing lessons. [7] Nonetheless, the East German minister of the interior Karl Maron wrote a press release stating that the „criminal" had died of his injuries after trying violently to break through the „state border." [8] The East German press published the minister’s words, reinforcing the government’s efforts to demonize the fugitive. [9]

Meanwhile in West Berlin, the police and public prosecutor’s office had begun an investigation of the border guards who had shot Axel Hannemann and they made the case public. The Chief of Police offered a reward of 3,000 German marks for tips leading to the identification of the perpetrator. A similar search had taken place once before when Roland Hoff was shot in the Teltow Canal on August 29, 1961. Again the wanted posters were directed mostly at the border guards on the other side of the barrier. Posters were hung along the Wall at places clearly visible to the border guards. [10] The West Berlin authorities were hoping that this drastic measure would appeal to the guards’ sense of responsibility and make it quite clear to them that they should at some point expect to be held accountable for shooting a fugitive.

Once again it would take another thirty years before the gunmen could be legally prosecuted. By then, however, the former border guard identified as responsible for the deadly shots had already died. The second guard who had also aimed shots at the young man was, however, found guilty of joint manslaughter in September 1993 and sentenced to two years in prison, commuted to probation. The verdict stated that he had acted in complicity with his guard leader and had to be held accountable for „his last deadly shot at Axel Hannemann, understood as a shared effort by the two guards." [11]