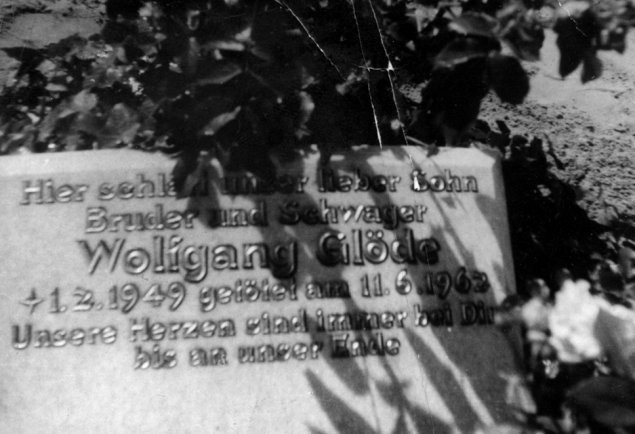 Wolfgang Glöde: Grave at the Baumschulenweg cemetery in Berlin-Treptow (date of photo not known) (Photo: private)

in the "Sorgenfrei" garden settlement
at the sector border between Berlin-Treptow and Berlin-Neukölln
Wolfgang Glöde and his friends wanted to know how the machine pistols the border guards carried worked. The men gave in to their pleas and showed the boys their weapons. Without removing the magazine, Private K. released the safety of his Kalashnikov, causing the accident.An East Berlin schoolboy was killed in an accident that occurred on June 11, 1962 in a garden settlement in Berlin-Treptow. The settlement, called „Sorgenfrei" and meaning „carefree" in German, is located right at the border of the West Berlin district of Neukölln. The grounds had been heavily guarded ever since the inner-city sector border was sealed off on August 13, 1961. To prevent escape attempts in the outer areas near the border, armed guards patrolled the pathways between the garden allotments twenty-four hours a day; even on Whitsun Monday 1962. On this day two border policemen accidently fired a shot while showing their machine pistols to children in the complex. The 13-year-old Wolfgang Glöde was fatally injured. [1]

Wolfgang Glöde was born on February 1, 1949 in East Berlin and grew up in the „Sorgenfrei" garden settlement at Kiefholzstrasse in Treptow. His family had lived there since 1930. He had two older siblings. His father worked as a metal worker for the Berlin Machine Repair Center. His mother was a housewife. Because there was still a housing shortage after the war, the Glöde family, like so many others families in the neighborhood, moved permanently into its leased garden property. [2] The lives of the residents’ who lived here were dramatically altered after the Wall was built. Before August 13, 1961, a number of paths led from the settlement into Neukölln, but afterwards they were all cut off from the neighboring district. Over time a military border regime with guard posts, watchdogs, barbed wire, barriers and observation towers was established around them. „Unauthorized people" were denied access to the allotment gardens. The „border population" was expected to adjust to this oppressive situation and this is why the communist regime engaged in patronizing propaganda to win over the residents while at the same time strongly mistrusting them. [3] The permanent presence of armed border police posed a security hazard to them but was tacitly accepted by the military leadership.

On June 11, 1962 Wolfgang Glöde had spent the entire day with Horst und Peter W., friends his age from the garden settlement. In the afternoon they went to see the soccer games at the local field. Around 6 p.m. two border policemen came by. They had been assigned patrol duty at the nearby border grounds that Whitsun Monday. Although it was against the rules, the two 19-year-old privates engaged in a conversation with the children. Wolfgang Glöde and his friends wanted to know how the machine pistols the border guards carried worked. The men gave in to their pleas and showed the boys their weapons. Without removing the magazine, Private K. released the safety of his Kalashnikov, causing the accident. While loading the gun, K. mistakenly set off the trigger and a shot was fired, hitting Wolfgang Glöde at close range. He was shot through a lung and died shortly thereafter. [4]

Startled by the sound of the shot, Wolfgang Glöde’s parents rushed to the site of the accident. We can only imagine what tragic scene took place when they saw their son dying on the ground. The files of the border police and Ministry of State Security do not reveal how the residents reacted. What is documented, however, is how the East German authorities attempted to nip all hostility and criticism in the bud. The border police, in cooperation with the Treptow Communist Party district leadership, passed a series of measures „to prevent the events from being falsely presented to the population." [5] These included the deployment of additional guards and meetings with parents and teachers of Wolfgang Glöde.

The military leadership determined that Private K. was responsible for Wolfgang Glöde’s death. The commander of the 5th Border Division stressed in his investigation report that both border guards had been advised by their supervisors on the correct way to handle and use their weapons before they went on duty. He thus concluded „that the events were caused by blatant negligence on the part of Private K." [6] In another passage he wrote that the accident proved that certain guards did not handle their weapons responsibly. This required that „strong disciplinary and legal measures be taken." [7]

Private K. was arrested on the spot and interrogated by a military attorney who immediately opened an investigation of negligent homicide. [8] It is not known whether K. was tried by a military court or what his punishment was. [9]

News of Wolfgang Glöde’s death quickly spread to West Berlin where authorities initially assumed that the information was false and that the boy was more likely shot while trying to escape. [10] This was suggested in a press release that the Senate published on June 15, 1962. [11] Over the following days newspapers ran headlines such as „Pankow Border Guards Shoot […] East Berlin Schoolboy" and „Wolfgang in Mortal Agony for an Hour." [12] Even Chancellor Adenauer and the mayor of Berlin, Willy Brandt, mentioned the name of Wolfgang Glöde in speeches they held on June 17, 1962, the Day of German Unity, both strongly condemning the shots fired at fugitives fleeing at the Wall. [13] Sometime the following year the law enforcement agency in the West learned that the boy was indeed killed by accident, after which his name was removed from the list of Wall victims. [14]

A quiet funeral took place in the presence of his family at the Baumschulenweg Cemetery in Treptow. The tombstone bears the inscription: „Here rests our dear son, brother and brother-in-law Wolfgang Glöde, *1.2.1949, killed on 11.6.1962. Our hearts will always be with you until our final days."