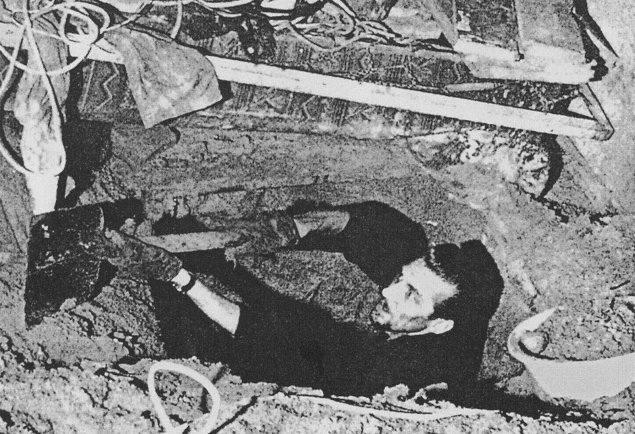 at Heinrich-Heine-Strasse 49
at the sector border between Berlin-Mitte and Berlin-Kreuzberg
It was only through a coincidence that the East German secret police was able to track down Siegfried Noffke and his fellow tunnel builders. Not aware that her brother was a Stasi informer, one of the East Berliners, who was planning to flee through the tunnel, told him about the tunnel project. The brother, under the alias “Pankow,” immediately informed the East Berlin Stasi district administration.Two unidentified people laid a wreath in the West Berlin district of Kreuzberg, not far from the Heinrich-Heine-Strasse border crossing, in the summer of 1962. They were mourning Siegfried Noffke, who was shot and killed on the other side of the Wall two days earlier during a tunnel escape operation. The ribbon decoration bore the inscription: “To our dear Siegfried Noffke as a final farewell from his friends. – He died a victim of the Wall.” [1] The twenty-two-year-old West Berliner and two other men were hoping to help their families escape from the other side of the city. Contrary to the rumors spread in East Germany that “armed terrorists had invaded,” what happened was far from what they called “a job commissioned by western agents.” It was a private undertaking. [2] The tunnel builders were ambushed while opening the tunnel on June 28, and, although they were unarmed, the East German agents ruthlessly fired at them. Stasi files later revealed that an informer within the group had betrayed their plans quite early on. [3]

Siegfried Noffke was born in 1939 in Berlin and grew up in the Soviet sector. The trained bricklayer fled to the western side of the city in the 1950s, lived in the Kreuzberg district and worked as a driver. In May 1961, after his son was born, he married the mother, Hannelore, who lived on the other side of the sector border in Prenzlauer Berg. The newlyweds had probably presumed that the wife and child would be allowed to move to the west side of the city after the wedding. But the East Berlin authorities refused to grant them an exit permit and consequently, when the border was later sealed, they found themselves unexpectedly separated. [4] Like many East-West couples, they had no choice over the following weeks and months but to meet secretly at the border grounds where they could occasionally see and speak to each other briefly across the barrier. This situation continued for almost a year until, at one of these meetings, Siegfried Noffke met a West Berliner who was in the same situation and who invited him to join a tunnel escape project to get their wives over to West Berlin. [5] Siegfried Noffke, Dieter H. and Dieter G. had made considerable progress digging their tunnel, which began in a basement on Sebastianstrasse, a street in Kreuzberg located directly on the border of the East Berlin district of Mitte. They planned for the tunnel to end in the basement of a house at Heinrich-Heine-Strasse 48/49.

The year 1962 is considered the heyday of tunnel-building. A number of people were able to escape through more than a dozen tunnels running beneath the Berlin Wall that year, but it was a thin line between success and failure, and arrests and fatalities were common. [6] Heinz Jercha, a native of West Berlin, was killed by Stasi agents while leading people through a tunnel. In mid-June, when the excavations on Sebastianstrasse were moving forward slowly, the East German border guard Reinhold Huhn died from shots fired by a West Berlin tunnel builder. After that East German propaganda became more openly hostile to “criminal intruders” and the Stasi increased its behind-the-scenes measures to prevent escape operations. 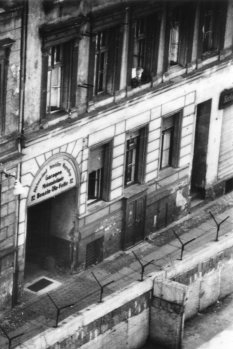 Siegfried Noffke: MfS photo of the escape building entrance between Berlin-Mitte and Berlin-Kreuzberg [June 28, 1962] (Photo: BStU, Ast. Berlin, AIM 3870/91, Nr. 228c)
It was only through a coincidence that the East German secret police was able to track down Siegfried Noffke and his fellow tunnel builders. Not aware that her brother was a Stasi informer, one of the East Berliners, who was planning to flee through the tunnel, told him about the tunnel project. The brother, under the alias “Pankow,” immediately informed the East Berlin Stasi district administration. [7] Thus, even before Siegfried Noffke had joined the project, the agent mission “Maulwürfe” (moles) was underway with the aim of spying on all the people involved and arresting them all at once when the underground escape route was completed. [8] To achieve this, the informant “Pankow” infiltrated the group by pretending to be someone who wanted to flee. He participated in the preparations without anyone seeing through his duplicity. The betrayer was even present when the tunnel was opened on the afternoon of June 28, 1962. He helped the three tunnel builders break through to the basement where the Stasi agents were expecting them. [9]

According to accounts from surviving tunnel builders, shots were fired as soon as Siegfried Noffke and Dieter H. entered the basement. [10] Stasi files document that one of the Stasi men got rattled and, contrary to the plan to arrest the escape helpers, began shooting. [11] Siegfried Noffke was fatally wounded and Dieter H. suffered major injuries. The informant “Pankow” and another Stasi man also suffered gunshot injuries. Even after the collapse of the East German state, the former Stasi informant Jürgen H. and the man believed to have fired the deadly bullet refused to speak about what had happened. Consequently, the legal proceedings that were opened on the basis of Stasi files in the 1990s had to be discontinued without arraignment due to a lack of sufficient proof. [12]

Although he was critically wounded, Siegfried Noffke was interrogated on the spot so that the Stasi, to quote one of their reports, could squeeze a “confession” out of him. [13] The twenty-two-year-old father seems to have died from his injuries on the way to the hospital. His wife was arrested along with all the other East Berliners who were planning to escape through the tunnel. The informant “Pankow” was also arrested for appearance’s sake. They were convicted by the Berlin-Mitte city court in November 1962 of “attempting to leave East Germany illegally” and handed down prison sentences ranging from one to two years. After his arrest Dieter H. was brought to a Stasi prison hospital. In October 1962 he was tried for “state-endangering acts of violence” and for “tempting people to leave East Germany.” He was found guilty and sentenced to nine years in prison.