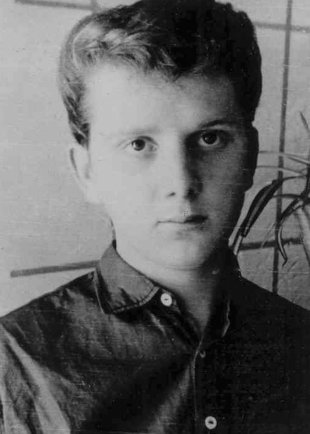 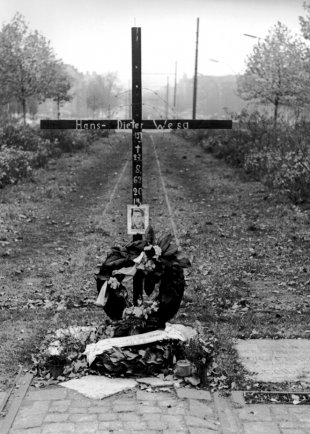 at the Bornholmer Strasse S-Bahn station
at the sector border between Berlin-Prenzlauer Berg and Berlin-Wedding
As soon as B. began looking for him, he realized that Wesa had climbed over the border fence to West Berlin. When Wesa ignored his order to come back, he "made use of his firearms," as the official reports euphemistically put it, although Wesa was already past the sector border and had reached West Berlin territory.In April 1962 the transport police officer Hans-Dieter Wesa’s unit was transferred from Leipzig to Berlin to guard the border stations and railroad facilities. The 19-year-old man was assigned duty as a border guard at the Berlin Wall. On August 23, 1962 he was on duty at the Bornholmer Strasse S-Bahn station, located near the border to the West Berlin district of Wedding. [1] He and the 18-year-old Adolf B. were assigned to a post at the "ghost station" beneath the Böse Bridge, where trains passed by without stopping. They quickly began talking because Hans-Dieter was acquainted with B. from the days when they had served together in the Leipzig transport police. B. later recounted a conversation where Wesa said, as if in jest, that his sister in West Germany would certainly be surprised when he showed up there. [2] B. had not taken the comment seriously because Wesa was considered a reliable comrade. He only became suspicious after dark when Wesa, on the pretense that he had to turn on the lights on the other side of the track, disappeared. 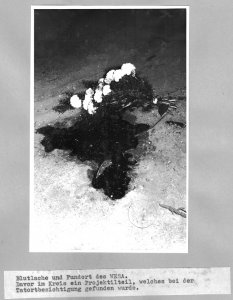 Hans-Dieter Wesa: West Berlin police crime site photo [Aug. 23, 1962] (Photo: Polizeihistorische Sammlung/Der Polizeipräsident in Berlin)
As soon as B. began looking for him, he realized that Wesa had climbed over the border fence to West Berlin. When Wesa ignored his order to come back, he "made use of his firearms," as the official reports euphemistically put it, although Wesa was already past the sector border and had reached West Berlin territory. [3] B. described what happened: "I ordered Wesa to stop. Wesa turned around and when he saw me he tried to run away. I fired a burst of about six shots at him, after which he fell to the ground and remained there motionless. I then fired another burst of fire, about six shots at him." [4] Hans-Dieter Wesa probably died immediately. Criminal and forensic investigations in West Berlin conducted soon after his death revealed that he was shot in the thigh in such a way that he must have fallen to the ground before B. approached the fence from the other side and shot him again from close proximity in the face and body, killing him. [5]

The West Berlin Chief of Police pressed charges against an "unknown Soviet zone transport police officer" although in the divided city even a case with such overwhelming evidence had little chance of bringing a perpetrator to justice. [6]

After East Germany collapsed, the Berlin public prosecutor’s office opened the investigation again, which led in 1990 to criminal proceedings against B. When the accused tried to evade police questioning, he was placed in temporary detention in November 1993. He was ultimately charged with manslaughter in June 1994. [7] But the case never came to trial because Adolf B. took his own life in September 1994. [8] He never revealed what reasons or circumstances led him to shoot down his comrade.

Hans-Dieter Wesa grew up in Trebitz near Wettin. His parents came from Galicia. His father was a carpenter and had had his own workshop in his hometown in Ukraine. After the Second World War began, the family was resettled "back home to the Reich" as part of Nazi policy. After the Polish population was expelled from the Warthegau, the family was assigned a farm lot. Hans-Dieter Wesa was born there in January 1943 in a town called Schlewen in the rural district of Gostingen. He was the youngest of four siblings. His father was taken prisoner of war by the Russians rather early in the war. The mother and four children fled westward, away from the Red Army in 1945. After arriving in the Soviet zone of occupation, the local authorities assigned them to Trebitz. When the father returned from captivity in 1949 and began looking for work as a carpenter again, the parents decided to remain in the small community northwest of Halle an der Saale. As devout Christians, they harbored reserve towards the communist regime. They were active in the Protestant Church, where the mother was a member of the church consistory. They supported their eldest son’s decision in 1954 to make a new life for himself in Baden-Württemberg in West Germany. [9]

Evidently neither his supervisors nor his comrades had any idea of his intentions. Wesa appeared completely at ease with his situation. He was friendly and open and was regarded as an "exemplary officer of the East German Police." Just a few weeks before his escape attempt, in July 1962, he supposedly even helped hinder a "border breach", which is why he was prematurely advanced to head constable. [10] In his final report, the commander of the 1st Border Brigade wrote that the trust "that was invested in him, through his promotion and assignment to the open position at the state border to West Berlin" was absolutely justified. For lack of any other explanation, he concluded that "despite his good service and participation in politics class, the deserter did not have a strong class consciousness and deceived his supervisors and comrades." [11]

When Hans-Dieter Wesa’s brother in Eybach, in Baden-Württemberg, read in the newspaper about what had happened in Berlin, he immediately contacted the West Berlin authorities and arranged for his brother’s body to be sent to his residence so that he could be buried there. The deputy commander of the West Berlin uniformed police gave the funeral eulogy. [12] A number of West Berlin police officers also attended the official memorial service that had taken place in Berlin two days earlier on August 25, 1962. They wanted to pay their last respects to their East German colleague.