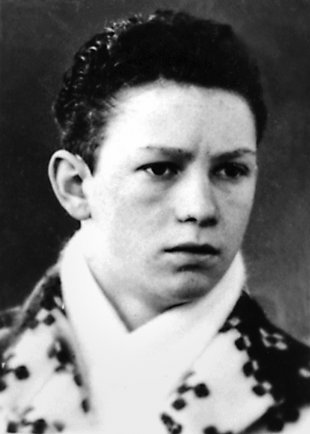 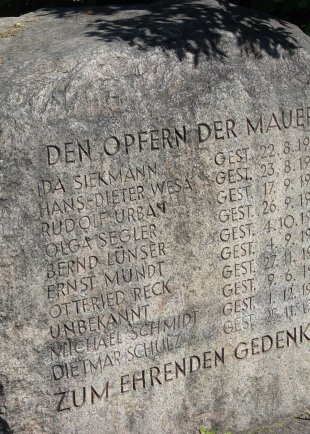 Otfried Reck was 17 years old when he tried to flee from East to West Berlin with his friend Gerd P. Their plan was to reach the other side of the city by following the underground tracks of the north-west railroad. They knew of a ventilation shaft at the corner of Invalidenstrasse and Gartenstrasse, not far from the border grounds near the closed Nordbahnhof station that followed the so-called "cellar line." Gerd P. later reported that they had grown up together in the Mitte district and when they were children used to play on the railroad grounds, and that they had occasionally climbed through the shaft to the tracks. [21] This time they planned to use a red-painted flashlight to wave down a passing train headed for West Berlin. The fact that the opening had been blocked off with a grid to prevent escapes did not deter them. [22] Early on the evening of November 27, 1962 they set off with a plan to remove the grid with a crowbar. Their friend Michael M., who did not want to flee with them, acted as a lookout. 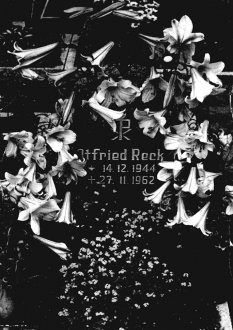 Otfried Reck: Gravestone (date of photo not known) (Photo: private)
According to official reports, they were noticed at 6 p.m. [23] A border soldier positioned beneath the S-Bahn tracks heard a noise, reported it and a search party was set in motion. The teenagers, sensing that something was not right, sent Michael M. to check out the situation. When he did not come back, Otfried Reck and Gerd P. became suspicious and decided to give up the plan for the day. This is when they first noticed their pursuers and started to run to avoid arrest. Later Gerd P. said that it never occurred to them that the border soldiers might shoot at them at the skating rink, one of their favorite hangouts. K., second lieutenant, however, did not hesitate to use his weapon to stop the assumed "border violators." A bullet hit Otfried Reck in his back. Badly injured, the 17-year-old was brought to the People’s Police Hospital where he died three hours later. [24]

The fact that he was shot down quite a distance from the border fortifications remained unmentioned in the border troop and Stasi files. Contrary to the usual practice, no sketches were made to document the site where the events occurred. When the gunman K. was found guilty of manslaughter in 1995, the Berlin district court concluded, on the basis of eyewitness accounts, that at the time he "used his weapon frivolously because he should have recognized that the escape attempt had already failed" and that the shots fired at the youths "could in no way be justified, not even in light of the regulation on the use of firearms." [25]

Consequently, their son had contact with the world of opera from an early age. He attended performances as often as possible and dreamed of one day becoming an opera singer, even though his friends were typically more into rock and roll and pop music and teased him about his taste in music. Apparently Otfried Reck had no difficulty finishing his schooling and received the secondary school level certificate, after which he began an apprenticeship as a gas station attendant. He spent most of his free time with other young people his age. The skating rink in his neighborhood, where he was later hit by a deadly bullet on November 27, 1962, and the "Helmut Just" youth club in the cultural house across the street were their favorite hangouts. When the sector border was still open they also spent a lot of time on the west side of the city. According to his friend Gerd P., they never let an opportunity pass to make fun of East German policemen. In the eyes of the police, however, these teenage cliques were susceptible to falling under the bad influence of the western class enemy. [26] 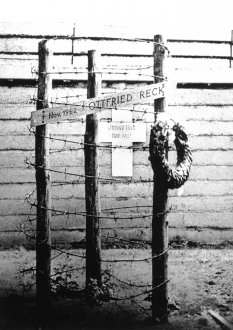 Otfried Reck: Memorial on Bernauer Strasse in Berlin-Wedding (date of photo not known) (Photo: BStU, MfS, HA XXII Nr. 18536, F2, Bild 27)
There was no open conflict with the state authorities, however, until after the Wall was built. After this the authorities responded with rigorous counter measures to every form of protest against the border fortifications and hundreds of people were arrested for merely expressing resentment. [27] Otfried Reck’s activities caught up with him on September 12, 1961 when he was arrested on Gartenstrasse for being part of a crowd that had gathered at the sector border and was supposedly condemning the border fortifications. Such conduct was considered "state-endangering agitation" and, with no consideration for his young age, Otfried Reck was found guilty and sentenced to one and a half years in prison. [28] He served his sentence in the youth penitentiaries of Dessau and Torgau until he was released on parole in August 1962. His mother later said that the state had "obstructed" his future with this. [29] After he was released, his fear of being arrested again was so great that he wanted to escape the state’s grasp by fleeing to the West. He placed his trust in his friend Gerd P., who was three years older and had already spent time in West Berlin before the Wall was built. Reck decided straight away to join forces with him.

Today, Gerd P. still believes that they were betrayed by someone. He was initially able to get away when the shots were fired, but was arrested the next day along with Michael M. and sentenced to three years in prison. His interrogators left him in the dark for weeks about what had happened to his friend Otfried. At the same time the Stasi ordered an "investigation plan" that makes very clear that the preliminary proceedings were conducted with immense biases. The investigation was to prove "that the criminal elements were put up to RF [flight from the republic] by RIAS and other western publication organs." Moreover, "the criminal past" and their "disinclination to work" required further investigations "to prove just what kinds of elements are taken in by western propaganda." [30] That teenagers like Otfried Reck and his friends might have had their own reasons for wanting to escape the pressure to conform in East Germany is an idea that had no place in this ideological world view. 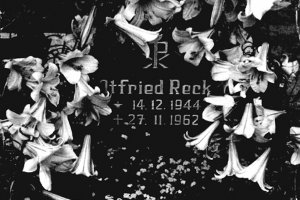 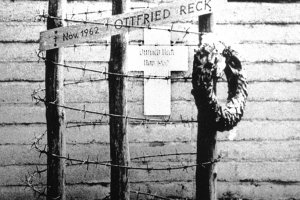