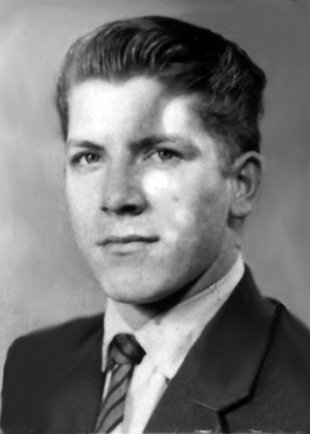 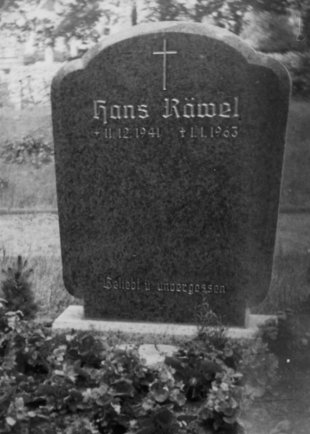 in the Spree River near the Oberbaum Bridge
at the border grounds between Berlin-Friedrichshain and Berlin-Kreuzberg
It was an unusually cold New Year’s morning with temperatures more than ten degrees below zero when Hans Räwel entered the freezing cold water of the Spree near the Oberbaum Bridge. For a good swimmer, trying to reach the West Berlin bank on the other side was not necessarily a futile undertaking."He was celebrating with his girlfriend at Zenner, near the Oberbaum Bridge on 1.1.63, and never came back." These were the words Hans Räwel’s mother wrote in her private notes to describe the loss of her youngest son. He had been missing since the morning of January 1, 1963. She also noted that in the following days of uncertainty, she received "the unfathomable news that Hans had been found on the state border, where he had drowned." [1] But his mother had been lied to. In truth East German border soldiers had shot and killed her son while he was trying to swim across the Spree River to West Berlin. 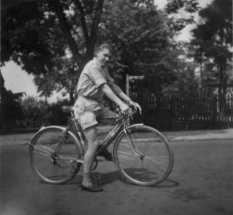 Hans Räwel as a teenager; date of photo not known (Photo: private)
Born during the war in 1941 in Stralsund, Hans Räwel grew up with three older siblings on Rügen, an island in the Baltic Sea. His parents ran their own bakery where their children also worked from an early age. In 1957 the family moved to East Berlin, where the parents took over a bakery in Rahnsdorf, Köpenick. Following his father’s wish, after he finished his schooling, Hänschen, as he was called by his parents and siblings, trained to become a baker. His sister recalled that her brother was very musical and often played the harmonica or accordion in the bakery. But their family life in East Berlin became increasingly overshadowed by the division of Germany. The oldest brother moved to West Germany in 1954. The other sisters and Hans Räwel’s father also moved to the West before the Wall was built. His sister Renate was the last to go in December 1960. They could not bear the constant political patronizing any longer, she remembered. [2] She knew that Hans was also determined to leave East Germany as soon as he finished his pastry chef training. The closure of the border on August 13, 1961 put an end to his plans. After that an escape to the West involved major difficulties and risks. He would have had to leave his mother behind, alone for a time – it was not clear for how long. This was why Hans Räwel hesitated at first. Weeks and months passed, lending the impression that he had come to terms with the new situation. Even on New Year’s Eve, 1962, he gave no sign of what he was planning. He spent the evening with a friend in the dance café "Plänterwald" in Berlin-Treptow, where they stayed until early in the morning. When they went their separate ways at around 4 a.m., nothing suggested that he was planning to flee to West Berlin just hours later. [3]

It was an unusually cold New Year’s morning with temperatures more than ten degrees below zero when Hans Räwel entered the freezing cold water of the Spree near the Oberbaum Bridge. For a good swimmer, trying to reach the West Berlin bank on the other side was not necessarily a futile undertaking. Any number of fugitives had been able to swim across the Spree between the Friedrichshain und Kreuzberg districts without anyone’s noticing. In fact, Berlin police reports documented that someone had managed to escape that very morning just a short way up the river. [4] Hans Räwel, however, was not able to evade the gaze of the guards. As soon as he entered the water he was noticed by the crew of a boat belonging to the East German border guards. When the border guards began pursuing him at around 6:15 a.m., he dove between the wooden posts that were placed in the middle of the river to hinder access. [5] Consequently, his pursuers had to maneuver around the so-called "Dalbenreihe" that blocked off an area longer than 300 meters between the Oberbaum Bridge and Osthafensteg. [6] In the end they caught up with him and opened fire at close range until Hans Räwel, fatally injured, sank beneath the water’s surface. "The border violator," one of the guards wrote in the protocol, "was situated at this point ca. 35 meters away from the western embankment." [7] 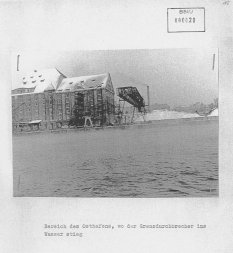 Hans Räwel: East German border guards crime site photo of the Osthafen between Berlin-Friedrichshain and Berlin-Kreuzber [Jan. 1, 1963] (Photo: BStU, MfS, HA I, 5862, Bl. 20)
Two police officers on the West Berlin embankment heard the border soldiers’ shots. According to their own account, they returned the fire because they felt threatened. Their shots hit the boat, slightly injuring the coxswain. [8] This incident triggered a strong political reaction. In the West use of firearms by the police was deemed justified when the officer in question found himself in physical danger. [9] East Germany saw this as a "confrontational attack of fire" from the West Berlin police. [10]

The East German Defense Ministry used the ADN press agency to spread its characterization of Hans Räwel’s escape attempt as a "prepared border provocation" and claimed that "forces hostile to peace and understanding" in West Berlin were using these kinds of murderous attacks on East German border security forces to try to "poison the international climate." [11] In contrast, the American Berlin commander, James H. Polk, spoke of a "regrettable start of a new year in Berlin." He condemned the shots at the defenseless fugitive as a "particularly irresponsible, provocative and frivolous misuse of firearms." [12]

In April 1994 three former East German border soldiers were charged with joint manslaughter. [13] All three of the men had been on the boat when it began the pursuit. It was determined that two of the soldiers had fired shots. The mother and sister of the victim attended the trial before the Berlin district court. Having been left in the dark by the East German authorities about the circumstances of Hans’ death, they hoped to finally learn what had happened that night. Regrettably, they found the guards to be disinterested and without any signs of remorse. [14] The court was unable to ascertain with certainty which of the men had fired the deadly shot. Consequently, both of the gunmen were found guilty of the charges against them in March 1996. It was the opinion of the court that, "had they given a bit of thought to the validity of the orders issued to them, they would have recognized that they were unjust. Given that the killing of a completely defenseless person swimming in ice cold water is in glaring violation of the fundamental principles of humanity, the violation of the law should have been recognizable to anyone." [15]