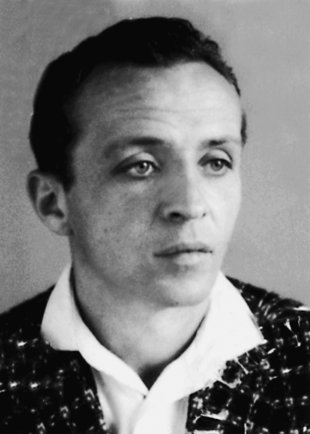 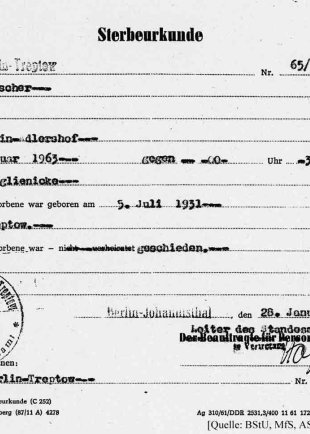 near Rudower Strasse
at the sector border between Berlin-Treptow and Berlin-Neukölln
They crossed an open field and slid under a barbed wire fence. They watched the border guards and waited for them to move away before they began crawling through the security trenches toward the border. At about ten minutes past midnight and with only 25 meters between them and the border to West Berlin, two shots were suddenly fired.The instructions given to the 2nd Platoon of the 4th Border Company were unambiguous. The border guards were informed that the following day the VI Communist Party Congress was to begin under the leadership of Walter Ulbricht and each one of them should "consider it his personal duty" to ensure that no border breaches take place. [1] Moreover, the number of deployed patrol guards was to be increased. Horst Kutscher and Joachim F. had no idea of the difficult conditions under which they were planning their escape. They made a spontaneous decision to flee to West Berlin on the night of January 15, 1963. It cost Horst Kutscher his life.

Horst Kutscher, born on July 5, 1931 in Berlin-Treptow, was the youngest of thirteen children born to a mechanical engineer and flower-seller in Berlin-Adlershof. According to information he provided about himself, he quit school at the age of 14 and began training as an auto mechanic, but for company reasons had to discontinue his apprenticeship after six months. [2] After that Horst Kutscher worked as a cleaner at construction sites and in September 1954 began working for various coal merchants in the district. He was a member of the FDGB trade union in the 1950s, but was not politically active. In March 1952, at the age of 21, Horst Kutscher got married. He fathered six children with his wife.

Horst Kutscher first got into trouble with the East German law as a teenager. He was convicted of numerous crimes such as theft, burglary and assault. He was sentenced to a number of prison terms over the years. [3] In February 1956 the East German police inspection recruited Horst Kutscher as a secret informant. [4] He agreed – possibly under pressure – to cooperate with the criminal investigation department and to provide information about criminal activities in his surroundings. [5] But Horst Kutscher did not appear at the agreed meeting places and spoke openly about his informant activities and was subsequently released from his obligation after only two months. [6]

In April 1956 he fled to West Germany – at first without his wife and children. His wife told the East German police that he left because of marital conflicts. [7] It appears, however, that his wife followed a short time later. In Bochum she gave birth to their fourth child. For reasons that are unknown, Horst Kutscher moved with his family from Bochum back to Berlin-Treptow a year later. The family initially registered their address as his parents’ home. The investigation report by a state border work group shows that after his return to the East, he worked as a so-called "border-crosser" in the West until the border was closed on August 13, 1961. [8]

Horst Kutscher’s ongoing alcohol problem led to his divorce in November 1962. At that point he had been living separately from the family at his father’s home in Berlin-Adlershof for two and a half years. [9] Problems also arose at his new job with a coal merchant in East Berlin. When Horst Kutscher and Joachim F., a colleague at work, began drinking on the job on December 14, 1962, they were both fired immediately. Apparently they were not aware of having done anything wrong and took legal action against their dismissal. But the Treptow district court rejected the case on January 14, 1963. [10]

Both men began drinking in the early afternoon of that day to get over their disappointment about the negative result of their claim. They went into a number of bars and, after becoming quite intoxicated, decided to flee to West Berlin that very evening. Joachim F., who survived the failed escape attempt, later testified during an interrogation with the East German police that the lost court case was the main reason they fled. [11]

On January 14, 1963, at around 10 p.m., Horst Kutscher and Joachim F. went to the border area at Semmelweissstrasse with the intention of crossing the frozen Teltow Canal to West Berlin. But once they got there they realized that the border area all around the canal was brightly lit so they decided to try their escape at another place in Berlin-Treptow. This time they tried to cross the border along the garden settlement between Wrede Bridge and the duck pond at Rudower Strasse. They crossed an open field and slid under a barbed wire fence. They watched the border guards and waited for them to move away before they began crawling through the security trenches toward the border. At about ten minutes past midnight and with only 25 meters between them and the border to West Berlin, two shots were suddenly fired. Horst Kutscher and Joachim F. threw themselves on the ground to seek protection. [12] The border guards arrested Joachim F. and dragged Horst Kutscher, who had been wounded, into the communication trench. They transported him by truck to their base where medics declared him dead. [13]

Although the East German secret police tried to prevent the fatal escape attempt from becoming public, information about the death of Horst Kutscher reached West Berlin. In the remand prison on Kissingenstrasse in Berlin-Pankow, Joachim F, who was convicted of fleeing the republic, told another prisoner about the escape attempt. A short time later this prisoner managed to get to West Berlin and reported the incident to the police in October 1963. [14] Horst Kutscher’s father moved to West Berlin to be close to his family in November of the same year. In March 1965 he received a subpoena from the West Berlin police. He told them that he had not been allowed to see his dead son before he was buried, nor was he permitted to attend the funeral. [15]

After the collapse of East Germany, Horst Kutscher’s ex-wife was questioned as a witness in the trial against the guard who pulled the trigger. He was sentenced on August 27, 1997 to a year and three months on probation. [16] She recalled that 14 days after the funeral she visited Horst Kutscher’s gravesite at Baumschulenweg Cemetery. It was only with the help of the cemetery attendant that she was able to find the unidentified gravestone marking where Horst Kutscher and two other people were buried. [17]