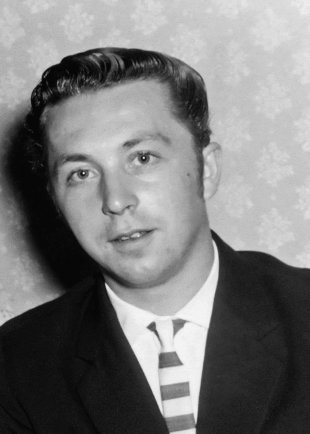 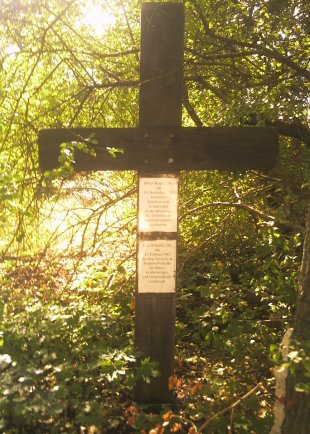 Dieter Berger from Glienicke in the Oranienburg district was 24 years old when he entered the East Berlin border area not far from his workplace in December 1963. Neither archival documents nor eyewitness reports provide conclusive evidence as to why he ended up there. According to border troop and Stasi files, he was trying to cross the border grounds, but his relatives thought it was more likely that after consuming alcohol he had wandered around aimlessly and unknowingly entered the border grounds. But after careful analysis of the facts, there is little to indicate that Dieter Berger had attempted an escape on the afternoon of December 13, 1963. Neither the life situation of the young family man nor the course of events that led to his death supported the idea of an escape attempt. 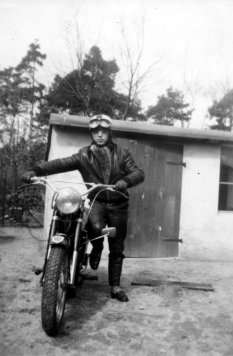 Dieter Berger: Hobby motorcyclist (photo: ca. 1960) (Photo: private)
Dieter Berger, shot dead at the Berlin Wall: Hobby motorcyclist (photo: ca. 1960)Dieter Berger, a bricklayer, was working in Adlershof at a construction site of the East Berlin Academy of Sciences that had established its natural science technology institute in the southeast of the city. He had been married for over a year and was the father of a little girl. Dieter Berger was born on October 27, 1939 in Polkau, Silesia. He never met his biological father, who died as a soldier in the Second World War. He grew up with his younger half-brother, his mother and stepfather. After the war, in 1947, his family left Silesia and settled in Glienicke, a northern suburb of Berlin located in the Soviet sector. He attended school here from 1947 to 1955, after which he did an apprenticeship as a bricklayer in a state-run company in East Berlin. [29]

Dieter Berger, shot dead at the Berlin Wall: West Berlin police crime site photo of the border strip between Berlin-Treptow and Berlin-Neukölln [Dec. 13, 1963]He married Gerda, who was five years younger than he, in 1962. She had also grown up in Silesia and moved as a child with her family to Glienicke. They moved into a small house with a garden not far from their parents and in-laws, with whom they got along well. After his death his widow commented that politics had not interested her husband, who was crazy about motorcycles. They had never discussed fleeing. As far as she knew, he had no reason to leave his family. [30]

His parents, like his wife, did not think that he had attempted to flee. His mother wrote in a letter to relatives in West Germany that „Dieter did not intend to leave us, nor did he have reason to do so. He was apparently drunk and lost his sense of direction […]." [31]

The investigations conducted by Stasi staff after his death confirmed this theory. The local East German police described Dieter Berger „as a highly regarded citizen who was not opposed to our system. Aside from the fact that he listened to loud popular western music in his house, there is nothing negative to report." He was always friendly and courteous and everything suggests that his marriage was harmonious. [32]

December 13, 1963 was a Friday. That morning Dieter Berger drove to work in Berlin-Adlershof as usual. According to Stasi files, during his lunch break he got drunk with a colleague and left the construction site later that afternoon. [33] After that he presumably walked to Johannisthal, the next bordering district. Two guards watched him approach the border grounds at the bank of the Teltow Canal at around 3 p.m. [34] They were in a communication trench within the prohibited strip and assumed that he was a fugitive. When they ordered him to halt, the man insulted them and continued to try to climb the fence. Later one of the guards testified before the court that the young man’s conduct had disconcerted them. [35] 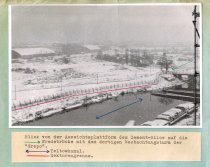 Dieter Berger: West Berlin police crime site photo of the border strip between Berlin-Treptow and Berlin-Neukölln [Dec. 13, 1963] (Photo: Polizeihistorische Sammlung/Der Polizeipräsident in Berlin)
In response to their warning shots, Dieter Berger climbed down from the fence and raised his hands in the air as they demanded. Workers and employees of the West Berlin cement asbestos plant on the other side of the canal became aware of what was happening. They also assumed that the fugitive had attempted to flee and was being arrested. Then they observed the supposed fugitive take a step away from the border grounds and witnessed his being shot by the border guards. [36] The East German border troop reports described the situation differently. They claimed that the West Berlin eye-witnesses engaged in a „provocation" by insulting the guards. The „border violator" tried to take advantage of this by escaping into the hinterland. [37]

Dieter Berger died from his injuries on the way to the People’s Police Hospital. He did not have any papers on him so it took the East German authorities a number of days to identify him. [38] The day after his death the West Berlin press reported: „Like hired assassins the members of the communist border police struck down a fugitive with his hands raised at the sector border in Johannisthal yesterday just after 3:30 p.m." [39]

Dieter Berger: Grave at the Waldfriedhof in Glienicke/Nordbahn (photo: ca. 1963) (Photo: private)
His wife had to identify the body at the forensic institute of Charité Hospital on December 16, after which an autopsy was performed. [40] The East Berlin coroners established that Dieter Berger had collapsed after being hit by a bullet in his thigh and was already lying on the ground when the fatal shots hit him. They also stressed that Dieter Berger was heavily intoxicated, which led them in the autopsy report to conclude that „at the time of his death, the person in question was no longer capable of recognizing the danger of his actions, nor could he act accordingly." [41]

After reunification two border soldiers were arraigned, but the main hearing never took place because the gunman had already suffered two strokes and was unable to stand trial. The man who had been his guard leader at the time was acquitted on November 1, 1995. The court found it was not evident that he had fired shots or ordered the shooting. [42] 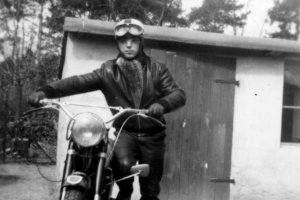 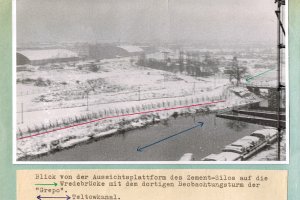 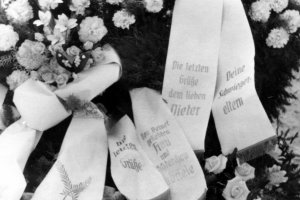