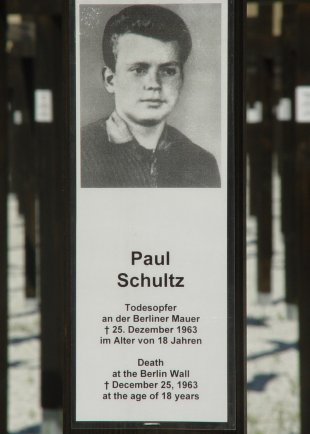 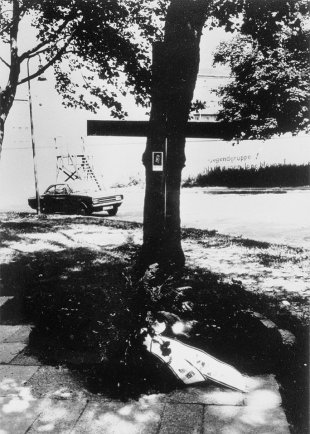 on the corner of Melchiorstrasse and Bethaniendamm
at the sector border between Berlin-Mitte and Berlin-Kreuzberg
The two boys left their homes early in the morning on Christmas Day, telling their parents that they were going to visit friends. Hartmut D. reported that they took a train from Neubrandenburg to East Berlin and walked for hours along the inner-city security grounds, looking for a good place to flee.Paul Schultz was shot and killed at the Berlin Wall on Christmas Day 1963. The eighteen-year-old from Neubrandenburg in Mecklenburg and his friend Hartmut D. had tried to break through the border between the Mitte and Kreuzberg districts that day. They had just scaled the wall, which was covered with barbedwire along the top, when border guards opened fire. Hartmut D. jumped down to the other side uninjured, but Paul Schultz was fatally hit by a hail of bullets before he could fall to the ground on the West Berlin side. A police constable on duty at the nearby Mariannenplatz rushed to the aid of the fugitive. Paul Schultz uttered in pain to him that he had been hit in the back. [1] He died that very night in the Bethanien Hospital in Kreuzberg from a bullet through his lung. [2]

The violent death of the 18-year-old fugitive not only overshadowed the Christmas celebrations, but also set off angry political protests. In December 1963, a "border pass agreement" had been negotiated allowing West Berliners to visit relatives on the east side of the city for the first time since the Wall had gone up. Now the political change that the Senate had worked so hard to achieve, and which everyone hoped would lead to an easing of tensions between the East and West, was suddenly called into question. [3] Everywhere doubts were raised as to whether it was right to engage in negotiations with the representatives of the East German communist regime who were responsible for the shots fired at the Wall. The vice chancellor and FDP politician, Erich Mende, said that it was unfathomable "that on the Christmas holiday shots were aimed and fired at a young person who wanted to do in a big city what is totally normal in a civilized society: go from one side of the city to the other without weapons and without luggage." [4] There were protest demonstrations for days at Mariannenplatz. Opponents of the East German communist regime erected a wooden cross with a photo of Paul Schultz at the site where he was shot and began a fasting campaign to denounce the East German leadership’s disregard for human rights. [5]

Paul was his best friend, Hartmut D. told the West Berlin police. [6] He fell into a state of shock when he realized that his friend had died right next to him. Later he said that it took him many years to get over this experience. [7] They had grown up together in Neubrandenburg. Paul Schultz, the youngest of three brothers, had been born there in October 1945. He never knew his father, who had fallen in the Second World War. He and Hartmut D. both left school upon receiving the secondary school certificate at the end of 10th grade. Paul became an apprentice to a private electrician in September 1962. Hartmut and Paul were almost exactly the same age and had celebrated their 18th birthdays together in October 1963. Hartmut D. later recalled that they began to discuss their plan to escape to West Berlin that evening. They had planned to go from there to West Germany. They knew that what they were planning was risky and that they might be shot at the Wall, but they said "it’s all or nothing." [8] 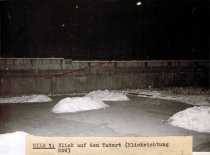 Paul Schultz, shot dead at the Berlin Wall: West Berlin police photo of crime site at the corner of Melchiorstrass and Bethaniendamm [December 25, 1963] (Photo: Polizeihistorische Sammlung/Der Polizeipräsident in Berlin)
The two boys left their homes early in the morning on Christmas Day, telling their parents that they were going to visit friends. Hartmut D. reported that they took a train from Neubrandenburg to East Berlin and walked for hours along the inner-city security grounds, looking for a good place to flee. When dawn broke they decided on a spot at the corner of Melchiorstrasse and Bethaniendamm because it seemed like the security strip there was narrower. They stopped a while, observing the border guards patrolling back and forth along the area and waited for the right moment. Then they climbed the interior fence and tried to run through the barriers as quickly as possible. "We heard the Soviet zone border guards cry out, ‘Halt!’ just as we were trying to get through the last fence before the Wall," Hartmut D. said. The guards started shooting immediately. [9]

The border troop and Stasi files show that at the very moment when the two boys entered the security strip, two additional guards appeared who happened to be patrolling between the individual border sections. The guards did not hesitate before opening fire. [10] They were later commended for their actions by the NVA city commander Poppe and awarded with a briefcase and a wristwatch.

In 1995 the Berlin district court found that both guards were determined to use their firearms to prevent the escape and had willfully accepted the death of the two fugitives. At the time of the hearing one of the gunmen had already passed away, but the second one was found guilty of joint manslaughter and sentenced to 18 months probation. [11]

As soon as Paul Schultz’s mother and brothers heard about his death from the RIAS West Berlin radio station, they came under East German secret police surveillance. [12] But the East German secret police were unable to find anything that could be held against the boys or their relatives. The Stasi files show that investigators used ideological biases and unproven assumptions to explain the boys’ actions: "Constantly listening to western radio" had "negatively influenced" Paul Schultz. The Stasi believed that Hartmut D. had been the "initiator of the border breach," and that Paul Schultz had allowed himself to be talked into fleeing. [13] East German media also presented the "facts" to suggest that the teenage fugitives had not acted of their own free will, but had been seduced by RIAS, western television and western politicians. [14]

The West Berlin authorities contacted the family of the deceased in East Germany to arrange to have the body transferred to them. The Stasi was aware of this because it had the family under surveillance, but it did not interfere. [15] On December 28, a West Berlin police escort accompanied the hearse to the border crossing at Heinrich-Heine-Strasse. West Berlin residents also joined in the murdered fugitive’s "final trip." [16] The funeral in Neubrandenburg two days later was not held in camera, as was propagated in the West at the time. [17] The funeral had been scheduled for the morning, but then, as a ploy to keep Paul Schultz's friends from attending, was officially postponed to the afternoon. His friends and colleagues learned of this and were able to attend the funeral after all. One friend recalled that the speech was held by a relative, whom he thought may have been a member of the SED district leadership. It ended with the sentence: "'Paul, we forgive you for what you have done. The murdered man should be forgiven for his deed – fleeing the Republic – but his murderers, who even received bonuses, should not!’ I have never forgotten this sentence." [18]