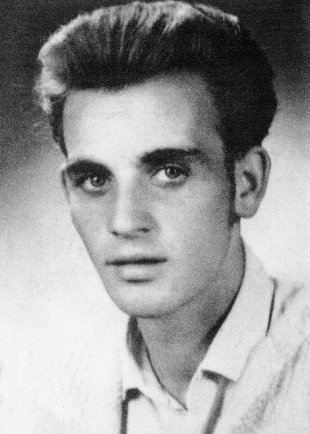 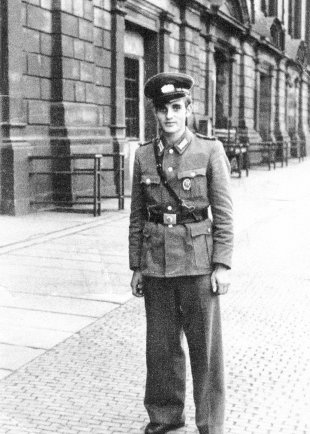 on Kiefholzstrasse
at the sector border between Berlin-Treptow and Berlin-Neukölln
Whatever his reasons may have been, it must not have been easy for him to embark on this dangerous undertaking. Before entering the border area Walter Hayn boosted his courage with a few drinks in a bar on the grounds of the "Sorgenfrei" garden settlement.A section of the sector border along the Kiefholzstrasse in the East Berlin district of Treptow was fenced in on both sides by garden plots. The small garden settlement „Sorgenfrei" (‘Carefree’) was located on the East Berlin side. The last barbed wire fence marked the border to the „Neuköllnische Wiesen" garden colony on the West Berlin side. On the evening of February 27, 1964, residents on the West Berlin side heard gunshots and tried to find out what was going on behind the fence. Their view was blocked by a hedge, but they could clearly hear the voices of border guards a few meters away. One of them called out, „Grab him!" Another one threatened in a harsh tone, „Stop you bastard or I’ll wipe you out." [1] Based on this information the West Berlin police had no doubt that firearms had been used to prevent an escape, but it was not known whether the fugitive had been hit by the shots fired. Finally, after the East German archives were opened, the events of that evening came to light: Border soldiers had shot and killed 25-year-old Walter Hayn while he was trying to escape to West Berlin. For „security reasons," the East German authorities did not reveal the circumstances of his death at the time, not even to the victim’s relatives. [2]

Walter Hayn was born in 1939 in Breslau. After the family was expelled from Silesia at the end of the Second World War, they resettled in Ebersbach, a community near Dresden in the Grossenhain district of Saxony. His father had remained missing since the war and the mother raised the four children alone and under difficult circumstances. The eldest brother turned his back on the newly founded East German state in 1950 and settled in West Germany. Walter Hayn, the second youngest brother, left school after eight years and began agricultural training. He worked for a time in construction before enlisting with the East German police force in 1958 – not so much out of conviction as in the hope that it would improve his career prospects. He was sent to East Berlin with the army, where, according to information provided by his brother, he served his duty on the inner-city sector border. [3] Walter Hayn was no longer serving in the East German police force when he became acquainted with the border regime that was established after the Wall. He was discharged from police duty in June 1961 and worked as a transport and construction worker. [4] By this time he was married and lived with his wife and their son in the Lichtenberg district until they divorced in September 1963. What led him to risk his life a few months later by attempting to escape is not known. His brother thought he wanted a better life. In the investigations conducted after his death the Stasi was unable to find any motive for his escape attempt. All they found out was that Walter Hayn was not, as they had first suspected, a „slacker at work" or a „drinker." He went to work regularly, paid child support, his financial situation was stable and his neighbors found him to be friendly and courteous. [5]

Whatever his reasons may have been, it must not have been easy for him to embark on this dangerous undertaking. Before entering the border area Walter Hayn boosted his courage with a few drinks in a bar on the grounds of the „Sorgenfrei" garden settlement. [6] He had his identification card, employment record, divorce papers and his brother’s address in West Germany in his pocket. He then set off, climbing over the interior fence into the security strip and tried to reach the three rows of border fence behind which the West Berlin garden settlement was located. It was 10:20 p.m. when he was noticed by the two guards who were patrolling this section of the border. When he failed to stop, they shot at him. The guards were assisted by another guard on duty nearby who also opened fire from the watchtower. [7] A total of 17 shots were fired. Two bullets hit Walter Hayn right in front of the fence; one of them killed him.

During the era of East Germany, the three guards were commended for „preventing a border breach." In 1995 they were indicted for joint manslaughter. During the main hearing all three men claimed that they had only shot into the air. [8] The court, however, concluded that at least two of them were determined to use all means to stop Walter Hayn from escaping and thus willingly accepted his death. It could not be determined which one was responsible for the fatal shot, but the court assumed that the two former border soldiers had acted together and their orders and insults that had been overheard that February night implicated them. For this reason the deadly shot could be attributed to either of them. Given the complicated legal position and in consideration of all the mitigating factors, they were sentenced to one year and nine months and one year and six months in prison with the sentence being commuted to probation. The court decision stated that one of the defendants was to „be punished more severely since he was personally responsible for hitting the victim with at least one bullet." [9] The third guard was acquitted because the court could not disprove his claim that he intentionally shot off target.

Walter Hayn’s brother, who pressed charges in 1991 and followed the trial closely, found the light sentences unfair. He remembered well how the East German authorities had pressured him and his mother after his brother died. Neither of them had believed the official claim that Walter Hayn had drowned at the „state border." Internally the East Berlin Stasi district administration justified their deceptive maneuver with the „Hayn family’s connections to the West." They tried to intimidate the relatives by warning them „that they are liable to prosecution if they spread rumors about this affair." [10] Nevertheless, the Stasi was not able to prevent a „certain agitation" from spreading in Walter Hayn’s hometown of Ebersbach after his mother filed a complaint with the local police. [11] Walter Hayn’s brother, however, did not leave it at that. He drove to East Berlin and began his own investigation but was unable to find any evidence. When a state prosecutor told him that everyone has to know what happens to a fugitive at the border, he became certain that his brother had been shot. [12]