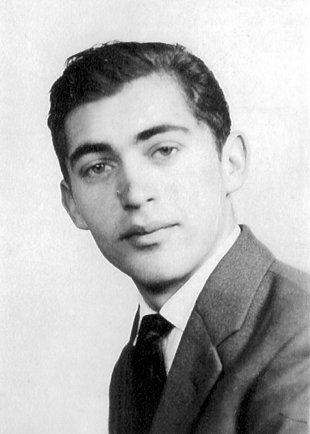 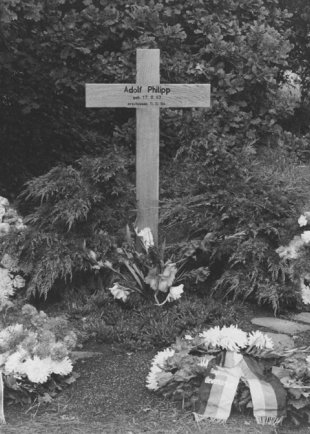 on the outer ring between Berlin-Spandau and Falkenhagen (Nauen district)
They document that two border soldiers from the 2nd Company of Border Regiment 34, responsible for guarding the East German Nauen district bordering the West Berlin Spandau district, saw footprints on the border strip during their evening rounds. Assuming that these were tracks from a fugitive, they ran to a ground bunker to report it. When they got there, they were surprised to find Adolf Philipp threatening them with a pistol.An announcement from the East German news agency ADN on May 5, 1964 caused horror and dismay in West Berlin. It reported that the 20-year-old West Berliner Adolf Philipp had been shot that night while attacking a border guard in the area of Staaken. [1] The next day the East Berlin chief state prosecutor had the body sent to the authorities on the west side of the city, leaving no doubt that Adolf Philipp had died from bullet wounds, but a number of unanswered questions remained. The Senate press chief announced on RIAS that West Berlin investigations were unable to find any damage done to the barbed wire fence on the border to Staaken, nor had any shots been heard during the time in question. [2] The East German archives that are now accessible reveal that the East German authorities had kept the western authorities guessing as to the exact location of the incident. But the theory that the supposed "attack" may have had to do with an operation to help people escape had already been proven false during the Cold War. [3]

Adolf Philipp came from Bavaria and had just recently moved to West Berlin. His younger sister remembered him as a thoughtful young man with high ideals who was highly regarded by everyone for his friendly and helpful manner. Born in 1943 in Ziemetshausen near Augsburg as the oldest of four children, he grew up happy and sheltered in humble conditions. [4] The father had a small radio shop and the mother contributed to the family income with a job at the nearby press plant. Their only son was a very good and hard-working student with a special interest in math and technology. He completed school with the secondary school level certificate and did an apprenticeship as a radio and television technician. After completing his examination with very good marks he had the employment office arrange a job for him in West Berlin in the summer of 1963. Skilled laborers had become rare in Berlin after the sector border was sealed. Anyone willing to move to the walled-in half-city could expect to receive a number of benefits, but Adolf Philipp’s main reason for moving there was that as a West Berliner he could not be drafted into the military.

Adolf Philipp began his new job in Berlin-Schöneberg as a radio and television technician in August 1963 and moved into a furnished room on the Kurfürstendamm. He wrote letters to his parents and sister describing in detail what he experienced: "Believe me, there is so much going on here, I have plans for the next half year," he reported shortly after he arrived. [5] At first it was the many leisure and cultural activities in the big city that captivated him. He went to the movies, theater and a radio show, he watched the six-day bike race in the Deutschlandhalle stadium and raved about the Chubby Checker rock and roll concert in the Sportpalast. But over time he became increasingly preoccupied with the Berlin Wall. He visited tourist attractions such as the Brandenburg Gate, and reported that it looked magnificent at night, "but the Wall [and] barbed wire in front of it are disturbing." [6] He repeatedly rode his bike along the sector border and to the city limits and spent a lot of time "studying," as he called it, the border grounds. Despite all the warning signs, he did not refrain from entering no-man’s-land, those areas that, seen from West Berlin, were situated between the actual border line and the East German barricades. He described that on one of his Sunday bike tours in the Grunewald woods, he entered into "at least 50 meters of eastern territory" because the barbed wire was set far back there. "Two Grepos appeared promptly. They stared at me as if I were the 8th world wonder. I was holding my camera in my hand, but since they did not say anything […], I refrained from taking a snapshot, although it would have been a good picture. These guys have the habit of staring at you through binoculars even from close up. They have to complete a report and write a personal description of every unusual incident." [7]

Adolf Philipp made no secret of his contempt for the border regime that the East German leadership had erected at the Berlin Wall. His sister recalled that during his visits to Ziemetshausen and in his letters he told relatives, neighbors and friends about the situation at the Wall and about families he knew that were separated. He described the situation at Bernauer Strasse as "dreadful." "The border runs right through the buildings on the other side of the street. Doors and windows are walled up. Shards of broken glass have been strewn over the top of the Wall. There is a church there that no one can visit. A cemetery with the graves of West Berliners lies deserted; there are four memorial plaques to people who died there trying to escape." [8] He could not understand West Berliners who had come to accept the division of the city. It is always the same, he once wrote: "When you say to them that they are really indifferent to the Wall they say, ‘Well what else should we do?’ As if there was nothing to do." [9]

Adolf Philipp: West Berlin police photo of site where his bike was found at the Oberjägerweg in the Spandauer Forst (photo: May 6, 1964) (Photo: Polizeihistorische Sammlung/Der Polizeipräsident in Berlin)
After his death colleagues reported that he had sought out people who felt the same way as he did, people involved in organizing escapes, so that he could become active himself. [10] He also attended some of the daily protest rallies against moving the Wall at the memorial to Peter Fechter that made the headlines in April 1963. Notes that he left behind in his apartment confirm that he was planning something, but they do not reveal exactly what.

Hence only the official reports of the border troops and East German Ministry of State Security provide information as to how Adolf Philipp died on the night of May 4, 1964. [11] They document that two border soldiers from the 2nd Company of Border Regiment 34, responsible for guarding the East German Nauen district bordering the West Berlin Spandau district, saw footprints on the border strip during their evening rounds. Assuming that these were tracks from a fugitive, they ran to a ground bunker to report it. When they got there, they were surprised to find Adolf Philipp threatening them with a pistol. Sergeant G. opened fire without hesitation. Adolf Philipp was hit a number of times and presumably died immediately. The Stasi investigation found that the weapon he had on him was only a gas pistol that could not fire real bullets.

In 1991, after the East German archives were opened, Berlin’s public prosecutor’s office opened a new investigation. The two border guards involved in the case were identified through military and Stasi files. They both confessed to the fact that Sergeant G. had fired the deadly shots at that time. His claim that he had felt threatened by Adolf Philipp and had acted in self-defense was confirmed by the other guard and could not be disproved. Hence, he was not arraigned and the investigation was ended. [12] 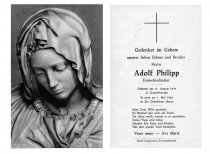 Adolf Philipp: Family’s obituary (Photo: private)
Adolf Philipp was buried in his hometown of Ziemetshausen on May 11, 1964 amidst strong public sympathy. His mourning relatives received many letters of condolence from teachers, colleagues and acquaintances. His landlady in Berlin wrote: "I know it is not much of a comfort, but this young man was exactly the way my deceased husband would have wanted his son, who died in the war, to have been." [13] The Spandau district office erected a wooden cross in memory of Adolf Philipp. [14] It was dedicated in August 1964 as the third anniversary of the Berlin Wall’s construction approached and still stands at the site where Adolf Philipp left his bike before he entered East German territory that night. His sister recalled that his relatives found his death "unfathomable, but not meaningless. He wanted something to change at the Wall and, after this cruel murder, all of Germany was looking at Berlin." [15]