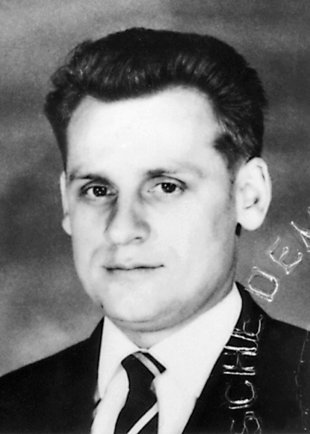 on the grounds of the Invaliden Cemetery
at the sector border between Berlin-Mitte and Berlin-Tiergarten
A member of the Stasi guard regiment that was responsible for guarding the entrance to the government hospital next door was the first to notice Walter Heike when he entered the border grounds there on the morning of June 22, 1964. The watch guard ordered him to halt and fired two warning shots, but Walter Heike did not stop.Walter Heike was 29 years old when he was shot on June 22, 1964 while trying to get past the Berlin Wall. The bachelor had been living at the time with his mother in Bad Freienwalde and had resumed work in his old profession as a painter. He had been living in East Berlin and working for the East German customs administration just a few months before, but had been dismissed from his job there on February 5, 1964 because he had supposedly met a woman from West Berlin while on duty at the border customs office at Friedrichstrasse. [1] The information provided by the available files is not conclusive, but the abrupt end to his professional career was no doubt a turning point in Walter Heike’s life and must have played a role in his decision to leave East Germany. Nonetheless, he sounded confident in a résumé that he wrote a short time later: „My social activities include singing in a choir, painting wall news sheets, club rooms, wall charts […] I am also keen on learning and further education. I have many diverse cultural interests." [2]

Walter Heike was born in 1934 in Taurage (Tauroggen), Lithuania. He was the first of two children born to the carpenter Rudolf Heike and his wife, Marie. The family belonged to a small German minority that had lived in the Baltic States for many generations. Walter Heike’s childhood was strongly affected by changes that had occurred as a consequence of the Second World War: His family was forced to move under troubling circumstances, which included expulsion, flight and resettlement. After resettling in German-occupied Poland, returning to Tauroggen and fleeing from the Red Army to Stettin, he finally reached Brandenburg with his mother and sister in July 1945 and settled in Wriezen, southeast of Berlin. His father never returned from the war and was registered as missing after 1945. [3] Walter Heike left school at the age of 16 without graduating. He worked for a time for a company that did painting for theaters and advertising in Strausberg and he trained as a painter. In early 1955 he enlisted for five years of service in the East German Garrisoned Police that became the National People’s Army of East Germany the following year. During this time, before the draft was introduced, the state and party engaged in a strong propaganda campaign to recruit people into the military. [4] Although the population was strongly opposed to rearmament, many young men enlisted for a number of years in the hope that it would improve their job prospects. For Walter Heike it seemed like his service had paid off. After leaving the National People’s Army, he immediately received a position working for the East Berlin customs administration. [5]

The available files do not provide information as to when Walter Heike began thinking about escape or whether, as the East German authorities claim, he wanted to be with the West Berlin woman who caused him to lose his job at the customs service. But there are strong indications that he had planned his escape in advance: During his last visit in early June 1964, he suggested to his sister that inquiries would soon be made about him. [6] Walter Heike was carrying personal documents and cash on him when he escaped, suggesting that it was not a spontaneous act. Moreover, he left behind a notebook in which he had carefully listed the names of all the books he had to leave behind. He approached the border at a spot where construction was taking place – a plot on Scharnhorststrasse in Berlin-Mitte that ran parallel to the Spandauer Schifffahrts Canal near the Sandkrug Bridge. [7]

A member of the Stasi guard regiment that was responsible for guarding the entrance to the government hospital next door was the first to notice Walter Heike when he entered the border grounds there on the morning of June 22, 1964. The watch guard ordered him to halt and fired two warning shots, but Walter Heike did not stop. He climbed the wall of the Invaliden Cemetery and ran towards the canal bank. According to military files, he was then noticed by four border soldiers at 5:30 a.m. – two guards who were on duty on what is now known as the Peter Göring Tower, and two guards in a vehicle who were about to replace the other guards on duty. Sergeant L. set off after the fugitive who had just reached the last obstacle and was trying to pull himself over the Wall in front of the canal embankment. Absolutely determined to stop the man from fleeing, the border guard knelt down, released the safety on his Kalashnikov and opened fire from a distance of 25 to 30 meters. [8] A bullet hit Walter Heike in his abdomen causing internal injuries and he presumably died immediately. The fact that the „enemy" on the other side of the canal was unable to observe the events was evaluated by the border troops as a success. [9] The West Berlin police officers on the other side had heard gunshots and seen a seemingly lifeless person being carried away on a stretcher but they were unable to see what had happened behind the Wall. [10]

Two days later the victim’s mother and sister were paid a visit by a Stasi agent and questioned. When Walter Heike’s sister demanded to know the reason for the questioning, she was told that her brother „had been fatally wounded in Berlin as a consequence of his own actions." The relatives were not told that he had died on the „state border" because the Stasi feared that they might have contact with relatives in the West. Walter Heike’s sister was not satisfied with this meager information, but her efforts to find out from the East Berlin attorney general where and how the supposed accident occurred were in vain. [11] The East German authorities were apparently also not pleased when Walter Heike’s last employer inquired about a death certificate. The state prosecutor in charge of the case informed him that the family had no claim to death benefits since the burial costs had been paid for by the state. [12] In truth, however, Walter Heike’s burial had been paid for with the cash that he had on him when he died. [13]