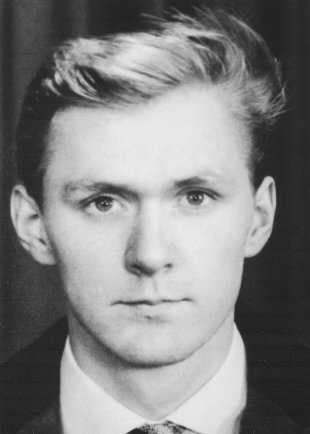 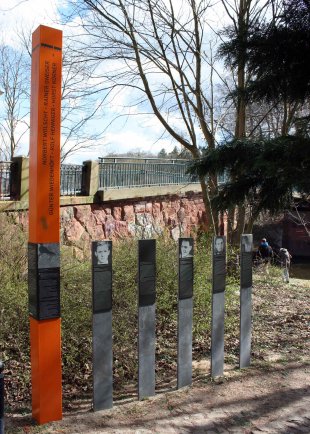 Norbert Wolscht: Commemorative Column on Lankestrasse at the foot of the bridge across the Teltow Canal towards Klein Glienicke (Photo: Hans-Hermann Hertle)

Norbert Wolscht and Rainer Gneiser had been planning and preparing their escape from East Germany for months. In July 1964 the two 20-year-olds from Freiberg in Saxony set off for Potsdam. Equipped with oxygen tanks, flippers, and diving suits, they planned to cross the Havel River to West Berlin on the night of July 28. The next day members of Border Regiment 48 pulled Norbert Wolscht’s body from the river. The time and place were documented in the East German border troop’s daily reports. [21] A week later the body of Rainer Gneiser was also found on the Babelsberger embankment of the Havel River. [22] The West was unaware of the fate of Norbert Wolscht and Rainer Gneiser at the time.

After the collapse of East Germany, friends and relatives of the deceased drew attention to the case. Criminal investigations were opened in the early 1990s to determine the circumstances of their deaths and confirmed the theory that the two friends had fallen victim to a tragic accident while trying to escape. [23] Norbert Wolscht and Rainer Gneiser grew up in Freiberg. They had known each other since their school days. Norbert Wolscht was born in October 1943 in Greiffenberg in Silesia, the second child of Benno Wolscht and his wife Charlotte. His sister Barbara was a year older than he. In 1947, when the father was still in captivity as a prisoner of war, the mother had to leave Greiffenberg, which now belonged to Poland. The grandmother, mother and children packed up their belongings and moved. Norbert Wolscht’s sister recalled that, although they were quite young at the time, the war and expulsion had been important events in their childhood. [24] After they were definitively expelled from Silesia their mother hoped to go to the British zone because she had brothers there living in Düsseldorf. But the refugee camp near Görlitz, where they were first taken in, was so overcrowded that she pushed hard to get a permit to move to relatives in nearby Freiberg and the family ended up settling in Saxony.

Norbert Wolscht left school upon receiving the secondary school level certificate after which he completed an apprenticeship as a lathe operator in a Freiburg company for high-precision mechanics. Although he did not have any obvious problems at school or in training, his sister believed that he had a hard time subordinating himself and adjusting to the ideological demands of the East German state. A friend with whom he had maintained a long mail correspondence remembered that he had always said that he would someday immigrate to South Africa. Nonetheless, he first followed the advice of a friend and completed his apprenticeship and started to learn English. When the Berlin Wall was built, Norbert had not yet celebrated his 18th birthday. The Wall seemed to ruin his plans for the future, but he did not completely give up his dream of living at the other end of the world. In the summer of 1963 he joined forces with Rainer Gneiser who had already failed to escape once before and who was now even more determined to give it a second try and turn his back on East Germany for good. They began to practice long-distance swimming and learned how diving equipment was built. [25] Norbert Wolscht was very athletic and a good swimmer.

The next summer they were ready to put their plan into action. They did not inform their friends or relatives of the details. Pretending that they were going on a camping trip, the two boys set off from Freiberg on a motorcycle on July 25. They probably went straight to Potsdam and spent a few days checking out the situation there. It is not known at what time and where on the riverbank they entered the water of the Havel on the night of July 28. The place where Norbert’s body was discovered suggested that they began their escape attempt at Tiefen See, the section of the Havel River between Potsdam and Babelsberg. They had probably wanted to swim underwater to the north and pass through the Babelsberger Enge on their way to the West Berlin embankment of the Havel, but they drowned in unexplained circumstances. The autopsy of Norbert Wolscht determined that he died at around two in the morning on July 28. It also stated that he died as a consequence of a faulty breathing apparatus. [26] The last sign of life that he left behind was a waybill addressed to his parents documenting that he had sent his camping equipment from Potsdam to Freiberg on July 27. [27] 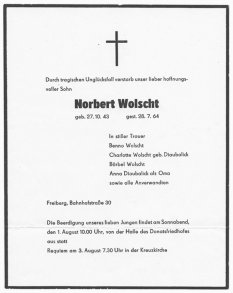 Norbert Wolscht: Obituary [July 1964] (Photo: private)
Since his death had been an accident, the Ministry of State Security was not notified of the case. The Potsdam police district office took charge of processing the "occurrences." Norbert Wolscht’s parents were informed the same evening and drove to Potsdam the next day. [28] They were presented with an identity card and neck pouch as proof that the deceased was their son. The parents requested and were permitted to see the body of their son. To understand exactly what caused the death, Norbert Wolscht’s father turned to the doctor in charge who gave him explicit assurances that no external wounds had been found. According to the doctor it was far more likely "that death occurred as a consequence of inhaling carbon dioxide toxins. Apparently the self-made diving equipment’s dioxide absorption filter had not functioned properly." [29]

Norbert Wolscht was buried in the Donatsfriedhof, a cemetery in Freiberg, on August 1, 1964. His parents wrote in the obituary that he died in a tragic accident, although they did not conceal from relatives and friends that their son had died while trying to escape. [30] 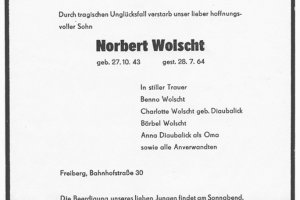