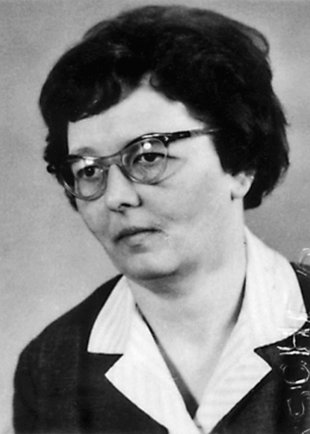 The woman who died was Hildegard Trabant. She was born as Hildegard Pohl on June 12, 1927 in Berlin. Documents show that she joined the Communist Party in 1949, the year the East German state was founded, and was valued as an active party member. She married in 1954 and lived with her husband in Friedrichshain in East Berlin. She held a managerial position in a municipal housing administration. Her husband was a member of the East German police force, employed in the passport and registration division. [3] Whatever led the 37-year-old woman to attempt to flee in August 1964 was probably of a private nature. Hildegard Trabant and her husband had had serious conflicts in the past. Her husband, the police officer, was questioned by his supervisor about this in February 1964. [4]

On August 19, 1964, the day after Hildegard Trabant died, a Stasi agent informed her husband that his wife had been shot and killed while "attempting a border breach." [5] The director of his work division was also present at the meeting. During the talk, the husband was apparently unable or unwilling to give information about why his wife undertook the escape attempt. In the end he had to agree in writing to remain silent about the fact that Hildegard Trabant was shot at the Wall. The statement that he was required to sign stated: "I have been instructed that I am only to tell my supervisor about the cause of death. To all other people I will only speak of a fatal accident." [6]

The Stasi’s methods were aimed at keeping the number of informed people low and decisive details, such as the place and time of the event, secret so that no information would leak to the West. The Stasi lieutenant in charge noted that "All officers involved in this affair maintained the usual security measures to ensure that particulars concerning the site of the incident were not made known." [7] This also meant that the Stasi took responsibility for arranging the cremation and urn burial of the deceased that took place on August 23 at the Frieden-Himmelfahrt Cemetery in Berlin-Niederschönhausen. The East German authorities, however, were not able to completely suppress all undesirable reactions. The news of the party comrade’s death led to a discussion among the Friedrichshain Communist Party district leadership that caused the Stasi to consult with higher-ranking party leadership "to avoid this sort of thing in the future." [8] Another annoyance occurred when the widower paid a visit to the East Berlin attorney general to apply for a death certificate to submit for an insurance claim. When the state prosecutor informed him that he had no claim to death benefits, he responded that by now it was generally known in what manner his wife had died. Her company had been informed by the Communist Party district leadership the day after her death and this had led to the spread of "certain rumors," even in their neighborhood. [9]

In West Berlin the brutal death of Hildegard Trabant went completely unnoticed. A legal investigation of the incident did not begin until October 1990, when the East Berlin files from 1964 were handed over to the German federal judiciary. [10] The trial against the guard involved in this case dragged on despite the overwhelming evidence against him because the accused insisted that he was not the perpetrator. In 1997, and in consideration of the fact that he was only 20 years old at the time of the offence, he was arraigned by the juvenile division of the criminal court. [11] The former border guard finally made a confession during the main hearing. He was found guilty on June 10, 1998 of manslaughter and sentenced to a year and nine months in prison. The court commuted the sentence to probation. [12] The court found that, based on the available documents, it was clear that when the shots were fired, Hildegard Trabant "was no longer trying to flee over the border and had instead run into the hinterland merely to avoid arrest." [13]