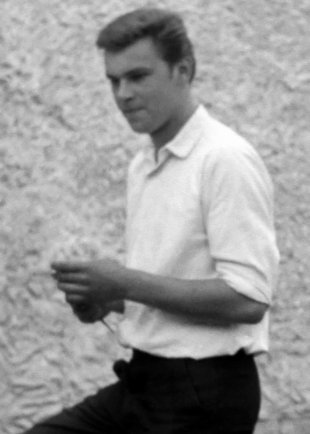 died from his bullet wounds on August 20, 1964
Wernhard Mispelhorn was 15 years old when the Wall went up. Like so many East Berlin youths of his generation, he experienced the loss of freedom and movement as a major change in his life. He and his friends did not care much about “building socialism.”A number of shots were fired shortly past midnight in the East Berlin “Schönholz” garden settlement on August 18, 1964. The grounds directly bordered the Reinickendorf district in the western half of the city. West Berlin police officers tried to observe what was taking place behind the East Berlin barrier. They identified two border soldiers with a stretcher, but they could not see that a critically injured young man was being carried away. [1] The man’s name was Wernhard Mispelhorn, age 18. He had been shot in the head while trying to cross the sector border and died in an East Berlin hospital two days later. [2]

Born on November 10, 1945 in Berlin, Wernhard Mispelhorn grew up with three older siblings in his parents’ house in Berlin-Buchholz. The fact that their home was located in the Soviet sector hardly affected the family in the first years following the war. His brother remembered visiting relatives in the western sector regularly when they were children and how much they liked it when their grandmother in Berlin-Wedding gave them money for the cinema. The parents were rather lax with their two sons, which is why they were mischievous children. After the parents divorced, they stayed with their mother in Buchholz and their older sisters went out on their own. One of them studied biology in East Berlin; the other one followed her boyfriend to West Berlin in 1960 and settled in Hanover. After he left school, Wernhard Mispelhorn completed an apprenticeship with a private company as a gas and water pipe fitter and later worked as a metalworker outside of Berlin. [3]

Wernhard Mispelhorn was 15 years old when the Wall went up. Like so many East Berlin youths of his generation, he experienced the loss of freedom and movement as a major change in his life. He and his friends did not care much about “building socialism.” They preferred listening to the American radio station, AFN, wearing jeans and raving about western-brand motorcycles and cars. Sometimes they discussed whether it would be better to take off for the West, but given the danger involved in escaping, these conversations remained mere talk. [4] It was not only a general dissatisfaction with the conditions in East Germany that led the 18-year-old to risk his life in August of 1964, but also the fact that his girlfriend had recently moved to West Berlin, apparently one of the rare cases in which the East German authorities permitted a family to be reunited. [5] Wernhard Mispelhorn confided to his brother that he wanted to risk an escape across the security grounds so that he could be with her. His brother tried in vain to talk him out of it.

Wernhard Mispelhorn spent the evening of August 17, 1964 with his friends Hans and Dieter in a bar in the Prenzlauer Berg district. They did not know that he wanted to go to the West because of the girl. They had always insisted it was a spontaneous idea that had developed over the course of the evening and after a number of beers. They decided to drive to Schönholz together that very night. Hans R. recalled hearing a rumor that you could get across the border there without difficulty. They just wanted to check out the area and were not seriously considering fleeing. Having arrived in the garden colony, they found a place where they could lift up the back fence so that Wernhard Mispelhorn could crawl under it and get a look at the border strip. They were completely surprised when he suddenly stood up and ran off. When they heard the gun shots, they panicked and ran away. [6]

Wernhard Mispelhorn was seen by two auxiliary border soldiers patrolling the interior security grounds. One Stasi report noted that the area was known as a “focal point for border violator advances.” [7] They continued to shoot at the fugitive until he collapsed in front of the border fence. The East Berlin commander immediately reported the “deterrence of a border breach” to Erich Honecker, who at that time was the East German secretary of the National Defense Council. The border guards were honored with the usual awards. [8] The fate of the fugitive, who died from his critical injuries two days later, played no role in these reports. Nor was anyone interested in who had fired the fatal shot. [9]

While Wernhard Mispelhorn was lying in mortal agony, the Stasi began asking questions about him in his neighborhood and work place. This formed the basis for a long report in which the state authorities vented their bias against the young people there because of their western lifestyle and accused the fugitive of many things, including “hooliganism.” [10] The Stasi did not notify his mother until the investigation was over. Her son was fatally injured at the border, they told her, but she was not allowed to see him. After he died she was forced to agree to remain silent about what had happened and not to investigate the matter herself. These methods of intimidation were aimed at keeping the relatives in the dark about the details of the escape attempt so that information would not leak to the West. The Stasi officer in charge noted in the file: “As usual, the offices (forensic medicine, hospital, registry office, crematorium) were not provided with any information on the location of the incident.” [11]

In order to avoid conflict with the authorities, the relatives maintained the official “rule of silence” and spoke of his death as an accident in the obituary and at the funeral. Wernhard Mispelhorn’s two friends kept quiet out of fear that they might be punished as accessories in helping a fugitive to “flee the republic.” Letters from his oldest sister in East Berlin that were personally delivered to Hanover show that within the family it was not a taboo to acknowledge that their youngest son and brother was shot while trying to escape. “It was a serious ‘accident’ caused by our special Berlin situation,” she explained with unambiguous clarity. [12] In another passage she asked her sister to keep her letters, which she wrote so that “the little that we know can be documented in writing. […] Even if it won’t bring him back I don’t think we should just accept his death!” [13]