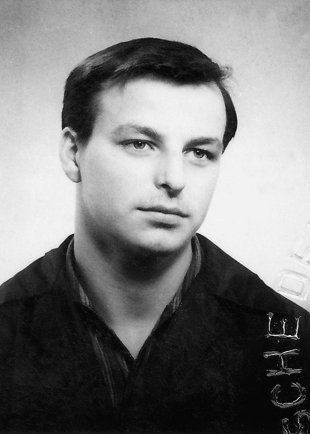 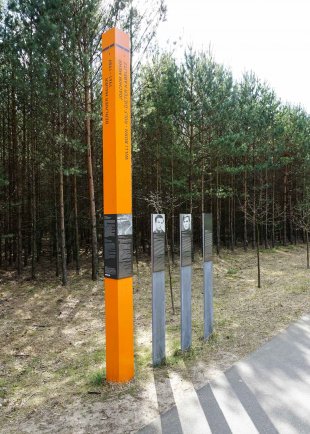 near Bergfelde
on the outer ring between Hohen Neuendorf (Oranienburg district) and Berlin-Reinickendorf
The border here ran straight through the woods and the border strip was brightly lit. They climbed over the interior wall, and, careful to stay in the dark, watched the border guards for a while. Then K. gave a sign and they ran off towards the last obstacle, the three rows of barbed wire fence.Two young men attempted to escape from the north of Berlin on the night of December 2, 1964. Firearms were used to stop them. According to West Berlin police and press reports, customs officers on duty in Frohnau in Reinickendorf heard shots fired and saw flares fly through the air at 2:20 in the morning. The newspaper reported the next day: "Customs officers noticed the two fugitives in the glow of light. They were lying down flat in the death strip." [1] The customs officers tried to get as close to the barbed wire fence as possible in order to establish contact. One of the fugitives indicated that they were injured and had to give up their escape attempt. Then more shots were fired. [2] The observers on the west side could not see what happened next. A smoke screen had been set off on the other side of the fence to obstruct the view from the west side when the two fugitives were carried off. [3] The 23-year-old Hans-Jürgen K. was delivered to the Henningsdorf Hospital with bullet wounds in both legs. Joachim Mehr, age 19, died immediately.

Joachim Mehr: MfS photo of lit-up death strip between Hohen Neuendorf (Oranienburg county district) and Berlin-Reinickendorf [Dec. 3, 1964] (Photo: BStU, Ast. Berlin, 9017/91, Bl. 44)
Joachim Mehr was born in Belgard, Pomerania, in April 1945 as the second child. He grew up in the Prenzlauer Berg district of East Berlin. His father was a master carpenter and had his own workshop and the son had followed in his father’s footsteps. He completed a carpenter apprenticeship in a state-run company and after passing his final exam he began working in his father’s workshop. He moved into his own apartment on Sonnenburger Strasse when he turned 18, but continued to take his meals at his parents’ house. After they learned of their son’s violent death, the parents were harassed by Stasi investigators and accused of harboring a "negative attitude" towards the East German state. In the eyes of the Stasi, Joachim Mehr was an unknown quantity. They were unable to identify western influences or thoughts of escape in the young man. [4]

According to the Stasi interrogation protocol, the father said that his son worked until 5 p.m. on December 2, 1964, as he did every day, and that he had dinner with his parents. After that he visited the Christmas market at Alexanderplatz with some of his friends. His girlfriend was also part of the group. [5] After bringing her home, Joachim Mehr stopped by the "Mila-Eck" bar where he met Hans-Jürgen K., whose younger brother was a good friend of his. K., was three years older and had successfully escaped to the West in 1962, but had later returned to East Berlin. They began talking and K. told him how he had managed to escape from the edge of the city back then. As they talked, they agreed to drive there that very night. Hans-Jürgen K. later asserted to the Stasi that it was a spontaneous decision that they made together on his suggestion. [6] When the bar closed they drove a moped out of the city to Hohen Neuendorf, a northern suburb on the border of the West Berlin district of Frohnau. They left the moped there and went by foot to the border area between Hohen Neuendorf and Bergfelde. The border here ran straight through the woods and the border strip was brightly lit. They climbed over the interior wall, and, careful to stay in the dark, watched the border guards for a while. Then K. gave a sign and they ran off towards the last obstacle, the three rows of barbed wire fence.

During the trial against the border guards in the Potsdam district court in 1994, it became clear that the two fugitives had been seen by two border soldiers who were stationed in a watchtower 160 meters away. [7]

Joachim Mehr: MfS photo of escape site between Hohen Neuendorf and Berlin-Reinickendorf [Dec. 3, 1964] (Photo: BStU, Ast. Berlin, 9017/91, Bl. 45)
The guard leader opened fire from the tower. Apparently the other guard’s gun had jammed. Joachim Mehr and Hans-Jürgen K. were injured and collapsed to the ground shortly before reaching the barbed wire fence. The border guards had left the tower by then and ordered the two youths to remain on the ground where they were. Despite their injuries, they continued to crawl on their stomachs until they reached the barbed wire fence, but then they agreed to give up their flight. At that point Sergeant K., who was on border patrol, arrived at the scene. Although both men were lying on the ground just 100 meters away from him and were already hopelessly entangled in the barbed wire, he fired more shots at Joachim Mehr when he moved. The youth, who had not had life-endangering wounds until then, was fatally hit. The court found the former border troop sergeant guilty of manslaughter and sentenced him to 18 months probation. The guard leader who first shot at Joachim Mehr and Hans-Jürgen K. received the same sentence for attempted manslaughter on two counts.

The East German authorities did not show clemency or leniency towards either Hans-Jürgen K., who suffered permanent damage as a result of his bullet wounds, or towards Joachim Mehr’s relatives. Although he was seriously injured, the twenty-three-year-old was transferred from a Stasi prison hospital to Berlin-Hohenschönhausen just one day after the failed escape attempt. After sitting many months in pre-trial confinement, the city court of greater Berlin sentenced him in August 1965 to three years in prison, a sentence that he served almost in its entirety. [8] During the investigation, Joachim Mehr’s parents were left in the dark about what had happened to their son. As soon as they received the news of his death, they were forced to sign a written statement claiming that he had "died from injuries that he brought upon himself during a border violation." [9] They were also obliged to pretend that their son had died in a traffic accident. Although they engaged an attorney, they were not permitted to see their son’s body. When Joachim Mehr’s father refused to accept this, he was subjected to a "talk" with the state prosecutor in charge of the case and an interrogation by the staff of the East Berlin Stasi district administration. [10]

Despite this pressure, the parents did not refrain from referring to the death of their son as a "tragic accident" in a local newspaper. The funeral took place on December 30, 1964 in the municipal cemetery in Berlin-Weissensee.