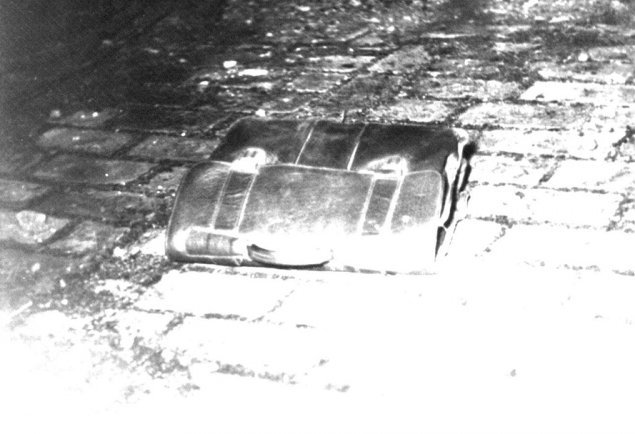 They called out to the man, who was only a few meters from the riverbank, and told him to swim towards them so that they could help him out of the water. But the man apparently lost all energy and they watched as he drowned before their very eyes. A West Berlin police report summarized what they had seen: "The fugitive, about 10 meters away from the West Berlin bank, suddenly went under, probably as a consequence of hypothermia and not due to the involvement of a third party." [1]

The attempted escape was also noticed on the other side of the river. Border soldiers shot off flares and drove by boat to the site where the man had sunk. Divers also joined the search, but by midnight they gave up without success. 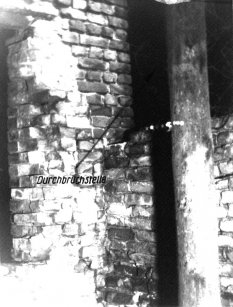 Unidentified fugitive: East German border troop crime site photo of the escape route in Berlin-Friedrichshain [Jan. 19, 1965] (Photo: BArch, VA-07/16934, Bl. 229-230)
Reports from the East Berlin border troops also documented the fatal escape attempt of the young man whose identity remained unknown. They reported that he was noticed by a border soldier who had illuminated the water’s surface with a flood light. The border guard apparently was unable to see the swimmer clearly, but heard him calling for help before he went under. Investigators found evidence on the East Berlin bank that confirmed their suspicion that the man had been trying to escape. With the help of a tracking dog, they were able to determine that the fugitive approached the river from a lot on Mühlenstrasse and had then crawled beneath the security fence. He left a briefcase behind that contained a shirt, magazines, an empty fountain-pen case and an open-faced sandwich wrapped in newspaper that had been printed in the Halle district in East Germany and was dated September 21, 1964. But there was no information as to the identity of the man. The investigation results led the commander of Border Regiment 35 to conclude that the "border violator had duly reconnoitered the border segment, patrol duty, and grounds in preparation for his criminal undertaking." [2]

Further investigations in both the East and the West did not lead to any new findings. In the nineties research on the case was resumed as part of the legal proceedings against violent acts at the Wall. But having been unable to find any new evidence, the public prosecutor’s office in Berlin dismissed the unsolved case in 1995. [3] The theory that the unidentified corpse discovered in the Spree on July 8, 1965 may have belonged to the unknown man who died on January 19 of that same year could neither be proven nor disproven.