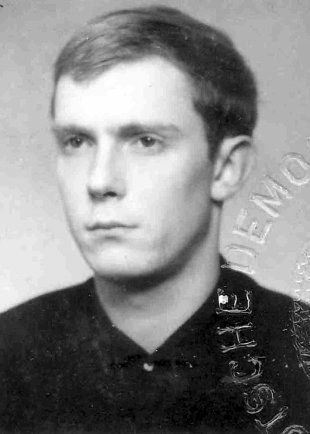 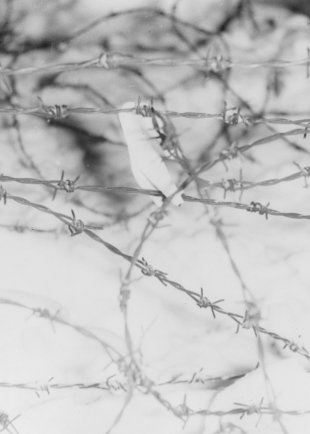 near Stahnsdorfer Damm/Teerofendamm
on the outer ring between Kleinmachnow (Potsdam county district) and Berlin-Zehlendorf
Christian Buttkus started building his own diving equipment in August 1964. The couple’s original plan was to leave East Germany in the summer of 1965 by way of the Teltow Canal in Kleinmachnow. The chemical expert built an underwater vehicle to enable them to get through the water escape route as quickly as possible.Christian Buttkus received his conscription order for the National People’s Army (NVA) at the end of February 1965. He was told that he should report to the Chemical Defense Battalion in Eggesin, Mecklenburg on May 1, 1965. [1] Christian Buttkus had known with certainty for a while that he did not want to serve in the NVA. He did not regard East Germany as his fatherland and hence did not want to take the oath of allegiance that every new conscript must take during the swearing-in ceremony. Christian Buttkus and his fiancée, Ilse P., had planned to flee to West Berlin in the summer, but when he was drafted sooner than expected, they decided to move their plans forward. [2]

Christian Buttkus, who had many relatives and friends living in West Berlin, had been thinking about escaping every day since the border had been closed on August 13, 1961. His fiancée later stated during an interrogation with the Stasi that he had been opposed to the sealing of the border because he felt it limited his personal freedom. [3] Christian Buttkus had wanted to pursue his career in West Berlin and study chemical engineering so that he could establish a livelihood there with his fiancée.

Christian Buttkus, who was born in Tilsit on February 21, 1944, experienced flight for the first time as a child. His birthplace was heavily bombed and declared a city on the battle front of the war in the fall of 1944. A large part of the population living in Tilsit was forced to evacuate. The city was captured by Soviet troops on January 1945 and, in accordance with the Potsdam Agreement, was granted to the Soviet Union. The remaining German population had to leave the city by 1947. The Buttkus family must have left Tilsit by then at the very latest. They found a new home in Berlin-Niederschönhausen. The father died in 1950 and Christian Buttkus, the younger of two children, grew up with his mother. He completed secondary school with the secondary school certificate in 1960 and immediately began training as a chemical expert in the state-owned chemical plant in Berlin-Adlershof. After completing his training he was hired by the same company. Christian Buttkus and Ilse P. became engaged in April 1964 at which point they immediately began planning their joint escape to West Berlin. [4] 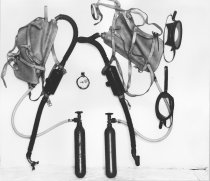 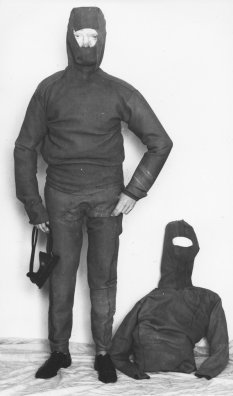 Christian Buttkus: MfS photo of the self-made diving suits for the planned escape through the Teltow Canal [March 4, 1965] (Photo: BStU, MfS, AU 9764/65, Bd. 1, Bl. 220)
Christian Buttkus started building his own diving equipment in August 1964. The couple’s original plan was to leave East Germany in the summer of 1965 by way of the Teltow Canal in Kleinmachnow. The chemical expert built an underwater vehicle to enable them to get through the water escape route as quickly as possible. The young couple tested it in their laundry room and in the nearby waters and realized that the vehicle did not work. Since diving suits were not available for purchase in East Germany, the couple decided to make their own. Christian Buttkus took the taped diving pants to a shop in Prenzlauer Berg to have them vulcanized on March 1, 1965, but then decided against the plan to leave East Germany by way of water. [5]

When Christian Buttkus heard the weather forecast on March 3, 1965, he thought that the predicted snow and strong winds might offer them good conditions for reaching West Berlin unnoticed by land. That very evening the couple made the decision to cross the border later that night in Kleinmachnow. Ilse P. had grown up there and knew the area well. Carrying a briefcase containing money, documents, two pliers and two white aprons as a disguise, the couple took the S-Bahn at around 10:30 p.m. and then transferred to a bus going to Kleinmachnow. They got off at the Schleusenkrug bus stop, crossed the Teerofendamm and Stahnsdorfer Damm where they attached the money and documents to their bodies, put on the white aprons and buried the briefcase in the snow. The weather report was accurate: It was a cold night with heavy snowfall. Christian Buttkus and Ilse P. approached the border grounds through the nearby woods. Everything was going according to plan. They crossed the so-called „anti-vehicle trench." It was 1:15 a.m. when they triggered an acoustic signal alarm that was installed there. Now they had to move fast. The couple quickly ran over a ten-meter-wide deforested area that consisted of the border patrol path and security strip. They had only the three layers of barbed wire fence left to get through. But two guards who had been on duty since 10 p.m. at the „Dreibirken-Durchschub" border area at Stahnsdorfer Damm near the transit highway, as well as another set of guards, had been alerted by the triggered signal. The first guards fired warning shots; the border guards on the control strip aimed directly at the fugitives. [6] Before the fleeing couple could use their pliers to get through the fence, Christian Buttkus was hit by 25 bullets on the right side of his chest. He died immediately from internal injuries. [7]

Christian Buttkus: MfS photo of escape site near Kleinmachnow on the sector border between the Potsdam county district and Berlin-Zehlendorf [March 4, 1965] (Photo: : BStU, MfS, AU 9764/65, Bd. 1, Bl. 175)
One of the 199 bullets fired grazed Ilse P.’s left calf. A short time later the injured young woman was driven to the border company headquarters. The border soldiers first carried Christian Buttkus’ body back to the anti-vehicle trench. [8] They wanted to prevent people in the West from seeing what had taken place. The body was transported to the company headquarters hours later and then delivered to the forensic institute of Charité Hospital in Berlin for an autopsy. The border soldiers involved in preventing the escape were honored with awards and a few were even promoted. [9] Ilse P., after being released from the hospital and serving pre-trial confinement in the Stasi prison in Potsdam, was tried by the Potsdam district court and found guilty of violating paragraph 8 of the passport law. She was sentenced to a year and eight months in prison on June 1, 1965. [10] She did not learn that her fiancé had died until the proceedings. Ilse P.’s prison sentence became unbearable after that. Apparently the district court was sympathetic to this and approved the district attorney’s request to have the remainder of her prison sentence suspended to probation. She was released on November 11, 1965. [11]

Christian Buttkus: Bullets that killed him, preserved by the Stasi [March 4, 1965] (Photo: BStU, MfS, AS 754/70, Bd. 11, Nr. 1, Bl. 31)
Four days after the failed escape, Christian Buttkus’ mother was informed by the Stasi „that her son had died from injuries he received during a self-inflicted border breach at the state border on March 4, 1965." [12] She was made to understand that her son’s death was to be portrayed as an accident and that she must keep silent about the actual circumstances. Christian Buttkus’ corpse had already been cremated on March 10, 1965 in the Baumschulenweg Crematorium. The files do not clarify whether the mother’s request to have the urn buried at the cemetery in Berlin-Pankow was honored. [13] Although the Stasi tried to keep the circumstances of his death a secret, the news that he was shot and killed at the border quickly spread around the mother’s neighborhood and at Christian Buttkus’ former workplace. [14]

In West Berlin Christian Buttkus’ death first became known through his relatives living there. In July 1965 they notified the „Liberal Jurists Board of Inquiry" in the hopes of finding out more about the true circumstances of his death. [15]

The border soldiers who shot Christian Buttkus were not investigated until the 1990s. The former border guard who fired the shots was convicted by the Potsdam district court of manslaughter in coincidence with attempted manslaughter and sentenced to a year and six months probation on December 22, 1994. [16]