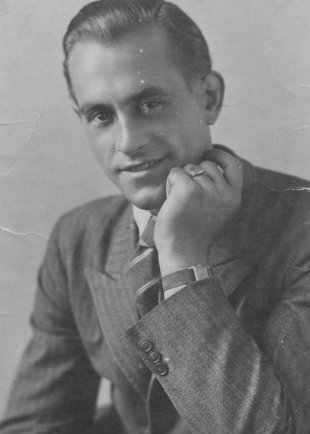 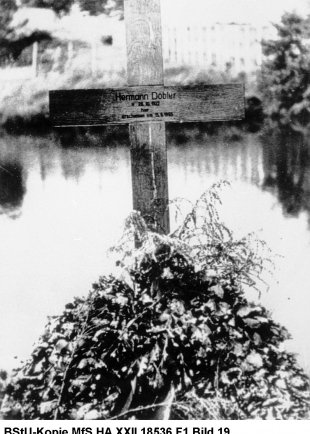 on the Teltow Canal near the Dreilinden border crossing
on the outer ring between Berlin-Zehlendorf and Potsdam
The couple on the boat was observed by the two border soldiers stationed on the watchtower at the southern bank of the canal. The guards evidently felt provoked by Hermann Döbler and Elke Märtens, possibly because they had waved to them. 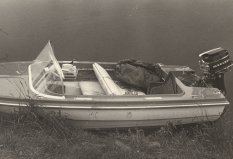 Four bullet holes: Hermann Döbler’s boat, June 15, 1965 (Photo: Polizeihistorische Sammlung/Der Polizeipräsident in Berlin)
The West Berlin businessman Hermann Döbler was shot and killed by an East German border soldier in the early afternoon of June 15, 1965 because he crossed the invisible border line in the Teltow Canal with his motorboat. The use of armed force against the forty-two-year-old entrepreneur from Berlin-Steglitz and his companion, Elke Märtens, who survived the shooting with serious wounds, was unanimously condemned in West Berlin. Detailed reports were printed in the newspapers about the couple and what had happened to them. Berlin’s mayor, Willy Brandt, referred to the act as „cold-blooded murder" and demanded that the guilty people in East Germany be held accountable. [1]

On the other side of the Wall, East German authorities tried to justify the shots by claiming that the border guards had been provoked by the two passengers on the boat. [2] The Stasi organized a malicious smear campaign against Hermann Döbler, who had lived in East Germany before the Wall was erected. [3] The East German head propagandist, Karl Eduard von Schnitzler, spread rumors that Döbler had a criminal record for theft and assisting flight from the republic and that he was long known to them as an agitator who had engaged in organized attacks on the East German state border. [4] Hermann Döbler had in fact helped his wife and children to escape from East Germany, but there was no direct connection between his former activities and the circumstances under which he was killed that June afternoon.

Hermann Döbler: Photo of the Teltow Canal near the Dreilinden border crossing with a sketch of the incident [June 15, 1965] (Photo: Polizeihistorische Sammlung/Der Polizeipräsident in Berlin)
Hermann Döbler was born in 1922 in a small town named Roderbeck in what at that time had been the Pomerania district of Greifenhagen, south of Stettin. He was conscripted into the Wehrmacht at the age of 18 and experienced the end of World War II in Berlin. Destitute and without vocational training, he was able to find a place to stay in the eastern section of the city during the chaotic years after the war. He worked for a time as a messenger and clerk, but soon became a successful independent businessman. He met his future wife in 1949 in Görlitz and they married a year later. The determined and attractive man quickly won her over with his charm, Irene Döbler later remembered. [5] They had three children together. In the mid-fifties, with the active support of his wife, Hermann Döbler founded a shipping company in Eberswalde near Berlin. A few years later the family moved to Karlshorst on the outskirts of East Berlin where the couple ran its own auto repair shop.

The company was thriving and business operations were not subjected to any restrictions from the East German authorities, hence he and his wife had no reason to consider leaving East Germany at that time. This did not change even when he was sentenced to six months in prison in 1958 for spontaneously helping a young man whom he had given a ride to in his car to flee from East Berlin to West Berlin. [6] A little later his business operations required that he cross the border regularly. In 1960 he took over a block of garages on Rothenburgstrasse in West Berlin’s Steglitz district. Hermann Döbler was spending more and more time at the other end of the city while his wife ran the company in Berlin-Karlshorst and lived there with their children. He was at his secondary residence in West Berlin on August 13, 1961 when the Wall went up and completely separated the family. Hermann Döbler tried to stay in contact with the family. He sent money and packages and set up meetings with the wife and children at the border fortifications. He was finally able to organize an escape for his family in May 1962. They hid in a truck that was traveling to West Berlin. After a few weeks in the West his wife realized that their marriage was finished and she returned with the children to East Germany without considering that the East German authorities would accuse her of having „fled the republic." They were divorced in May 1965, but Hermann Döbler stayed in contact with his children through letters and paid child support regularly. After he was killed, his children suffered tremendously from the public hostility and smear campaign against their father. They even had to endure having their teacher present him to the whole class as a criminal.

Hermann Döbler was accompanied by the 21-year-old Elke Märtens on June 15, 1965. [7] He had invited the young woman to take a daytrip with him on his motorboat. It was beautiful weather when they set off on the open boat along the River Havel and headed towards Wannsee. They reached Griebnitzsee and at the Kohlhasen Bridge turned into the Teltow Canal which, at the farthest southwestern edge of the city, bordered directly on East Germany at certain spots. The line of the border in this section of the canal was difficult to recognize and poorly marked. The first section of the waters belonged completely to West Berlin, then in the middle they were divided evenly between West Berlin and East Germany, and finally, behind the highway bridge that led to the nearby Dreilinden border crossing, the entire width of the canal belonged to East Germany. Elke Märtens later told the West Berlin police that they were sitting behind the steering wheel when they drove under the highway bridge. She had noticed a water barrier after the bridge that blocked off the entire width of the canal and she pointed this out to her companion, but Hermann Döbler reassured her that they could continue up to the water barrier. [8] Neither was aware that the east-west boundary lay 100 meters in front of this barrier or that they had already entered an area where the boundary was in the middle of the canal.

The couple on the boat was observed by the two border soldiers stationed on the watchtower at the southern bank of the canal. The guards evidently felt provoked by Hermann Döbler and Elke Märtens, possibly because they had waved to them. The border troop commander in charge wrote in his report: „After crossing the state border," the two boat passengers had turned provocatively back towards the guard tower, after which the guard decided „to use his weapon to annihilate the border violators." [9] He opened fire immediately and when Elke Märtens turned the boat around and headed towards the West Berlin bank, he aimed directly at the boat and its occupants. Hermann Döbler was hit four times: on his knee, torso and head. He died immediately. A bullet grazed Elke Märtens’ head and she was transported in critical condition to a West Berlin hospital. She survived but sustained permanent damage from her injuries. Hermann Döbler was buried on June 22, 1965 in the municipal cemetery on Bergstrasse in Berlin-Steglitz. His death was accompanied by tremendous public sympathy. More than 1,000 people paid him their last respects. [10] 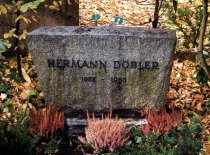 Hermann Döbler: Gravestone in Berlin-Steglitz (Photo: private)
After the East German state collapsed, the guard who had shot the couple, the border soldier who had stood by him on the tower without shooting, as well as the head guard who had given the orders that day, were held accountable for this brutal act. The Berlin district court was convinced that the gunman had acted with premeditation and convicted him of murder in coincidence with attempted murder. He was sentenced to six years in prison, one of the harshest punishments ever handed down to a border guard. [11]