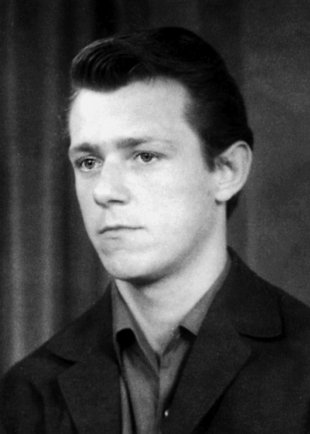 in the S-Bahn tunnel north of the Bornholmer Strasse station
at the sector border between Berlin-Pankow and Berlin-Wedding
The twenty-five-year-old was found dead in an S-Bahn tunnel north of the closed down Bornholmer Strasse station on August 8, 1965 at around 11:30 p.m. S-Bahn trains traveling regularly between the Schönhauser Allee and Pankow stations passed through this tunnel, which was situated within the border grounds.„I am only coming if my chances are good," Klaus Kratzel wrote from East Berlin to his in-laws in the western section of the city in early August 1965. [1] He had already suggested in other letters that he had written in the previous weeks that he wanted to flee to West Berlin. But he avoided using the word „escape" so that the East German authorities would not become suspicious when they read his mail. Instead he spoke in a roundabout way about moving to a new apartment. But his relatives understood his message clearly. Klaus Kratzel, who had recently left his wife and children and moved from West Berlin to East Berlin, was now looking for an opportunity to return to his family. [2]

Born in Berlin on March 3, 1940, Klaus Kratzel grew up with four siblings in the Weissensee district of East Berlin. After completing school he trained to become a bricklayer and later worked in that field. He met his future wife at a fair in Berlin-Stralau when he was 18. Their wedding took place in April 1961 after their first daughter was born, but the young married couple’s life changed abruptly when the Wall was built. Klaus Kratzel’s father-in-law was a Social Democrat. He worried that after sealing off the border between the East and West, the East German communist regime would go after political dissenters and their relatives more harshly. Hence he insisted that they flee to the West. Leaving all their possessions behind, Klaus Kratzel, his wife, their young daughter and his in-laws were able to get through the barriers on August 18, 1961. [3]

They registered at the Marienfelde Refugee Camp and, like hundreds of other East German refugees who had fled to West Berlin after the Wall went up, they spent a difficult time in various refugee camps. [4] After living for a year in destitution, they finally found their own apartment and the second daughter was born soon after that. Klaus Kratzel’s wife recalled that he was a good father who enjoyed looking after the children. But he had difficulties resisting the temptations of western consumerism and by January 1965 was once again facing financial straits. This caused a fight with his wife, which led him to leave their apartment, drive to the Friedrichstrasse S-Bahn station and apply at the border crossing for the right to return to East Germany. He had to go through a reception camp in the East Berlin district of Blankenfelde after which he was able to move in with his mother again. [5] The letters to his in-laws show that it was not long before Klaus Kratzel regretted his decision and wanted to risk escaping to West Berlin again.

The twenty-five-year-old was found dead in an S-Bahn tunnel north of the closed down Bornholmer Strasse station on August 8, 1965 at around 11:30 p.m. S-Bahn trains traveling regularly between the Schönhauser Allee and Pankow stations passed through this tunnel, which was situated within the border grounds. All signs indicated that Klaus Kratzel, who had mustered up his courage with alcohol, was hit by a train while trying to cross the track grounds to the Wedding district in West Berlin. [6] The East German authorities were puzzled by how he had managed to enter the heavily-guarded border grounds unnoticed. There had already been a few successful escapes in this rather confusing area of the border. Sometimes passengers pulled the emergency brakes while the train was passing through the border grounds and jumped out of the S-Bahn train at a good spot. [7] In the case of Klaus Kratzel, however, the East German border troops’ investigation was unable to find any clues to his „approach path." There was some thought that his accident may have had something to do with the escape of another young man that had also taken place that night in the same border area, but this could not be confirmed. The only certain thing was that Klaus Kratzel was accidentally killed while trying to reach West Berlin. The report written by the regiment commander in charge stated: „Site of accident, time and circumstances justify the theory that the fatally injured man was trying to break through the state border towards Grüntaler Strasse (West Berlin)." [8]

The border troop investigation findings were categorized as military secrets and not disclosed to Klaus Kratzel’s relatives. His mother wrote to West Berlin that all she had learned was that he had been involved in a fatal accident „on the tracks." [9] The East German authorities did not let her know where the accident had occurred. She was also denied her request to see her dead son’s body. He was buried on August 18, 1965 in East Berlin.

The non-transparent conduct of the authorities made the bereaved family members mistrustful, particularly since everyone in the family knew that the deceased had been intending to flee. For years rumors spread in the family that Klaus Kratzel had been shot at the Wall, a theory that after the East German archives were made accessible was ruled out by the Berlin public prosecutor’s office during its investigation in the 1990s. [10]