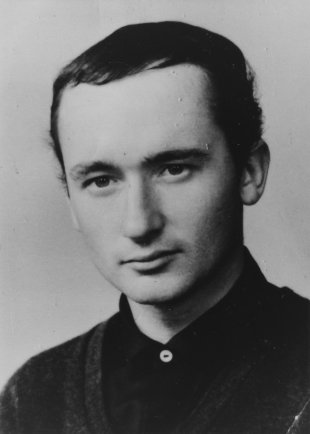 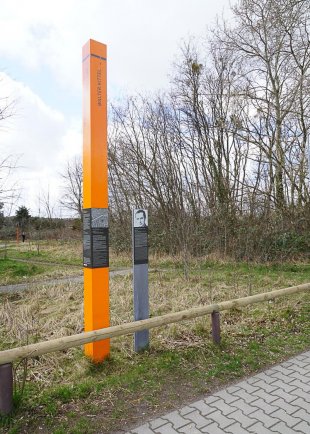 at Stammbahn 53
on the outer ring between Kleinmachnow (Potsdam county district) and Berlin-Zehlendorf
By 2:45 a.m. the two young men had reached the garden property at "An der Stammbahn 53" in Kleinmachnow and proceeded towards the one-and-a-half-meter-high interior fence that closed off the property from the border grounds.A sentence handed down by the Potsdam district court in one of the Border Guard Trials in December 1992 drew special attention. A former border guard was found guilty of manslaughter and sentenced to six years in prison on the basis of the East German criminal code. [1] The following year the Federal Court of Justice in Berlin increased the penalty on appeal to ten years in prison for murder. [2] The judge sentenced the former border soldier to the highest prison term possible with the explanation that the thirty shots that the defendant fired at the fugitive Walter Kittel after he had already surrendered were comparable to an execution.

Walter Kittel’s murderer was not prosecuted in East Germany. In fact the commander of the group division in Kleinmachnow was awarded honors and promoted to staff sergeant. The other guards involved were also praised and each received a wristwatch as a bonus for his good work. [3] 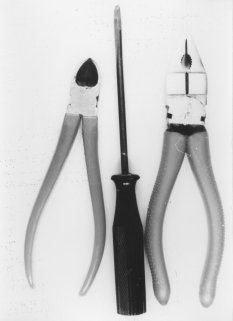 Walter Kittel: Tools he took with him to get through the border fortifications [MfS photo; October 1965] (Photo: BStU, Ast. Potsdam, AU 1684/66, Bd. 1, Bl. 83)
On the evening of October 17, 1965, Walter Kittel, who was 22 years old at the time, and Eberhardt K., who was two years younger, happened to meet at the „Libelle" bar in Teltow-Seehof. The two young men knew each other vaguely, but when they began talking, they quickly realized that they had something in common: They were both planning to flee to West Berlin. They left the bar at around midnight and took a bus to Kleinmachnow. It was Walter Kittel who suggested that they carry through with their escape plans that very night. Since he lived near the border grounds he had been observing the border strip and the border guards’ movements for quite some time. He also knew exactly where they should make their escape. Eberhardt K. agreed with the plan and accompanied Walter Kittel to his apartment where he had prepared a sketch of the escape route and had the tools needed to break though the barriers. [4] By 2:45 a.m. the two young men had reached the garden property at „An der Stammbahn 53" in Kleinmachnow and proceeded towards the one-and-a-half-meter-high interior fence that closed off the property from the border grounds. They made it through the fence, crossed the border patrol route and the anti-vehicle trench within the border grounds and crawled towards the border fence. They paused when they reached the chained-dog run. A watchdog approached them but did not sniff them out. Walter Kittel and Eberhardt K. were just a few steps from the last border fence when they were noticed by two border guards. The guards fired a signal flare and ordered the fugitives to move toward the guard path with their hands in the air. Walter Kittel and Eberhardt K. realized by then that their escape had failed. They went to the guard path as they were told to do at which point a verbal conflict flared up between them and the guards during which one of the border soldiers fired three shots at the captured fugitives. Eberhardt K. was hit in the foot. Walter Kittel and Eberhardt K. sought protection from the trigger-happy guards by climbing into the anti-vehicle trench. Yet the border guards continued shooting. Eberhardt K. was hit again and critically wounded in his upper arm and pelvis. At this point the commander of the group division, who had been alerted by the flare, arrived and took charge. [5] He ordered the fugitives to leave the trench. Unlike Eberhardt K., Walter Kittel had not yet been injured and was able to obey the order. After leaving the protection of the trench the commander fired 30 shots at him from a distance of 15 meters while screaming: „I swore to myself that no one would get out of here alive!" [6] Walter Kittel was hit in the chest and stomach and fell to the ground. He died immediately from internal injuries.

To prevent people on the West Berlin side from seeing what was happening the border guards immediately brought Walter Kittel’s body and the injured Eberhardt K. to the back area of the border grounds. [7] One of the border guards contemptuously knocked the corpse of Walter Kittel with his foot and said: „This bastard is dead but that dog there is still alive!" [8] They were loaded onto a truck and taken away. An autopsy was carried out on Walter Kittel’s body at the forensic medicine department of Humboldt University. Eberhardt K. was first taken to the Kleinmachnow Hospital and later to the People’s Police Hospital on Scharnhorststrasse in Berlin. [9]

Walter Kittel’s father was a member of the Communist Party and worked as a technical director for a state-owned company. The Stasi informed him the following day of his son’s death and had him sign a statement in which he agreed „not to inform a third party" about what had happened. [10] He also had to allow the state to organize the burial. A Stasi report stated that he was deeply pained by the news of his son’s death. He did not question the escape attempt since his son had fled to West Berlin once before in September 1959. [11] The family – Walter Kittel, his father and two siblings – had moved from Kölleda in Thuringia to Kleinmachnow just a few weeks earlier, after a number of close relatives in Walter Kittel’s family had all died within a few years. [12]

Walter Kittel, born on May 21, 1942, grew up and attended school in Kölleda. In 1957 he began an apprenticeship as an auto mechanic in nearby Gutmannshausen. After he fled to West Berlin he had to live in a refugee camp. Three months later his father picked him up there and brought him back to Kleinmachnow. [13]

It is not known why Walter Kittel decided to return to East Germany, but after his „repatriation" he seemed to have become politically active. He founded a marching band within his local FDJ youth group, joined the „writing workers" circle and became a member of the FDJ county leadership in Jüterbog, and later in Nauen. After completing his apprenticeship in Kleinmachnow in 1961, Walter Kittel volunteered to join the National People’s Army but was not accepted for health reasons. He attended the FDJ district school in Schwante for eight weeks the following year. [14] It was during this time that he met a young woman with whom he later had a child. [15] In August 1961 he was hired by the „Milchader," a milk production company in the Nauen district, and in 1964 worked for the Melioration Construction Company in Potsdam. [16]

By 1964, Walter Kittel’s political activities had started to subside. [17] He also drew public attention to himself around this time. In a drunken state he railed against Walter Ulbricht to an East German police officer. He also compared the methods of the East German police and his father’s parenting to those of the SS. [18] As a consequence, Walter Kittel was convicted in May 1964 of „criminal intoxication in connection with slander against the state" and sentenced to nine months in prison commuted to two years probation. [19] His statements were an indication of how unhappy Walter Kittel was with the political conditions in East Germany, but they also shed light on his family problems. The reasons for his second escape attempt were probably both political and personal.

Eberhardt K., who had fled with Walter Kittel, was convicted in December 1965 by the Potsdam district court of violating the passport law and sentenced to two years in prison. After spending nine months in a hospital he was transferred to the Berlin-Rummelsburg Penitentiary. [20] He told fellow-prisoners there about the failed escape attempt and Walter Kittel’s death. Two years later two of these prisoners made it to West Berlin where they made an official statement to the police. [21] Their report confirmed the suspicion long held by the West Berlin police that a fugitive had died on the sector border in Kleinmachnow on the night of October 18, 1965. A West Berlin policeman and a customs officer in the neighboring district of Berlin-Zehlendorf had heard shots fired that night, but they had been unable to see if anyone was arrested or if a body had been carried away from the border area. [22] The next day the press reported on a failed escape attempt in Kleinmachnow. [23] The West Berlin police placed charges against an unidentified member of the 4th Border Brigade of the 46th Regiment on October 25, 1965. [24] A few days later information leaked to West Berlin that a fugitive named Walter Kittel had died that night. [25]

Since 1999 a memorial stone at Adam-Kuckhoff-Platz in Kleinmachnow has commemorated the victims of the German division who, like Walter Kittel, died on the border in Kleinmachnow.