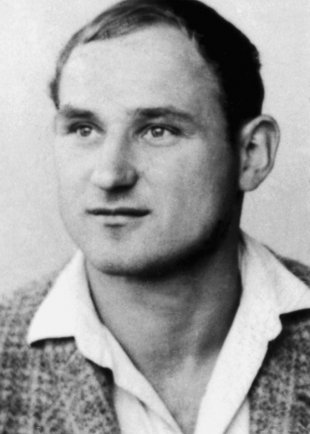 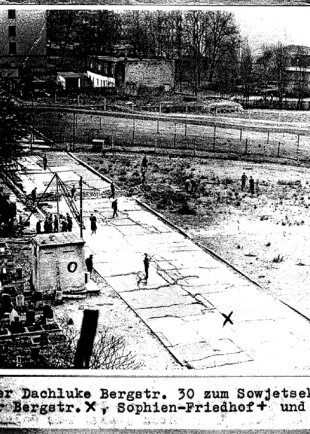 seriously injured on November 10, 1965
from a jump or fall out of the building at Gartenstrasse 85 while under fire
on the sector border between Berlin-Mitte and Berlin-Wedding

died from his injuries on November 11, 1965
The young man caught the attention of the East German secret police in October 1959 when an informant reported that he had gotten into a drunken fight with the LPG chairman and said: "You communist pigs, the day will come when you will hang from trees!"Berlin-Mitte, November 10, 1965, just past 9 p.m.: Heinz Cyrus was slowly moving towards the border fortifications near the Nordbahnhof station. A watchdog caught the scent of the fugitive and attacked. Two guards reported the incident immediately. East German policemen were called in and sealed off the back border grounds. After the guards allegedly called out to him to surrender, and he refused, they opened fire from three sides. The young man remained uninjured and rescued himself from the hail of bullets by entering a nearby building at Gartenstrasse 85. His pursuers surrounded the building and began a search. Heinz Cyrus climbed from one level to the next, his situation increasingly hopeless. Finally, in an act of desperation, he climbed out the hallway window on the fourth floor, clutched the rain pipe and crashed down into the courtyard below. He was transported to the People’s Police Hospital in Berlin-Mitte at around 9:30 p.m. with a fractured skull and a number of broken bones. [1] Doctors performed an emergency operation that night but he died from his injuries in the early morning. [2] 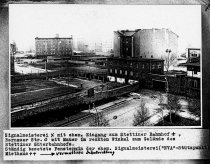 Heinz Cyrus: West Berlin police crime site photo of the border fortifications at Gartenstrasse in Berlin-Mitte [Nov. 10, 1965] (Photo: Polizeihistorische Sammlung/Der Polizeipräsident in Berlin)
Heinz Cyrus, the illegitimate child of a nurse in Greifswald, was born on June 5, 1936 and spent his first years in a children’s home. [3] He was adopted by foster parents in 1943 and grew up in the small town of Dreschvitz on the island of Rügen. After completing elementary school he trained to become a dairy worker and worked at a number of state-owned farms on Rügen. He married in 1954 and had four children. A school buddy described Heinz Cyrus as a well-behaved, strong man and able worker who was perhaps a „little wild." [4] In October 1956 he was imprisoned for beating up an East German policeman. He was released early from the prison work camp and in April 1957 he and his wife took over a single farm in Teschvitz with eight hectares of land. The couple joined the local agricultural production cooperative (LPG) „New Life" two years later. Heinz Cyrus was soon appointed deputy LPG chairman and was responsible for the production cooperative’s cattle.

The young man caught the attention of the East German secret police in October 1959 when an informant reported that he had gotten into a drunken fight with the LPG chairman and said: „You communist pigs, the day will come when you will hang from trees!" [5] He was arrested by the Stasi in March 1960 – a time when the forced collectivization and the „class struggle" in agriculture was intensifying. [6] The Rostock district court sentenced him during a public trial in June 1960 to seven years in prison for supposedly engaging in „harmful activities." Heinz Cyrus, the cattle breeder and dairy worker, was presented in the arraignment as a dangerous criminal. It was claimed that he disrupted the establishment of socialism in the countryside and „through his crimes had aligned himself with warmongers." [7] He was accused of having improperly fed the cattle of his LPG and improperly cared for them, causing considerable damage during the year 1959. Furthermore he was accused of pilfering animal feed and instigating rampant agitation against Communist Party members. During the trial the wives of LPG farmers in his village claimed that he had made advances towards them. Heinz Cyrus vehemently denied these and all the other accusations. But no fewer than ten „witnesses" and three so-called experts incriminated the accused. It remained unclear whether they acted voluntarily or under pressure from the East German secret police who had led the investigation and had also arranged the outcome. Heinz Cyrus was left alone with his argument that the animals’ food stock that he had taken over was insufficient from the start and the animal feed inadequate. The organizers of the show trial did not allow any witnesses for the defense. At the end of the trial, Heinz Cyrus’ counsel did not even object to the state prosecutor’s excessive demand for a seven year prison sentence. According to the protocol he instead asked the court for an „appropriate punishment" for his client. [8] Heinz Cyrus had to speak the last word himself, but his plea was made in vain: „I did not act as an enemy of East Germany and had no intention of harming it. I appeal for a mild sentence." The 24-year-old father was transferred in the summer of 1960 from the Rostock Stasi remand prison to the Torgau penal facility.

An amnesty decree passed by the East German state council in September 1964 facilitated his early release. [9] He was divorced by then and found work with a field crop brigade at a state-owned farm in Güttin (Rügen). In July of 1965 the county court of Rügen sentenced him for assault to six months in prison with a two year probation period. In early November 1965 the East German police on Rügen investigated him again. This time he was accused – whether falsely or not is unknown – of committing a violent crime. It was probably the threat of once again being put in prison that led him to decide to flee to West Berlin. He had four siblings living in West Germany. [10]

Members of the East German secret police visited Heinz Cyrus’ foster mother five days after his failed escape attempt to inform her of his death. They learned from her that on the evening of November 9 her foster son had said that he was „taking a few days vacation and was going on a ‘trip.’" He did not say where he was going. His foster mother inquired „whether the incident had taken place at the state border and whether he had been shot," which led East German secret police agents to surmise that she must have known about his plan to escape. [11] The Stasi told her and later also his ex-wife that he had fled from an identification check in Berlin-Mitte under the influence of alcohol, run into a building and jumped out of an upper-story window. Even the local East German police division representative in Heinz Cyrus’ hometown of Dreschvitz on Rügen and the deputy director of the state-owned farm in Güttin were not told the truth about the escape attempt. Instead they were told that he had been in an accident. A Stasi report explained that this was done „to prevent possible rumors from spreading in his hometown and workplace." [12]

Heinz Cyrus was buried on January 5, 1966 in the Protestant cemetery in Samtens on Rügen in the presence of his close family and friends. [13] The Stasi paid for his cremation with the money they had stolen from the dead man’s pocket. [14]

At the end of 1990 the Berlin public prosecutor’s office opened an investigation of the case. The West Berlin police had already placed official charges against unknown members of the National People’s Army on suspicion of manslaughter in 1965. Shots had been heard on the West Berlin side and a person was seen being carried away on a stretcher. In 1993 the public prosecutor’s office came to the conclusion that the members of the border troops had acted „in accordance with their official instructions" and thus were „not guilty." The investigation was closed on October 6, 1993 because the accused had evidently not violated the law and that „at least from a subjective viewpoint, the preconditions for criminal prosecution" were lacking. [15] The hounding of Heinz Cyrus and his death were never punished by law.