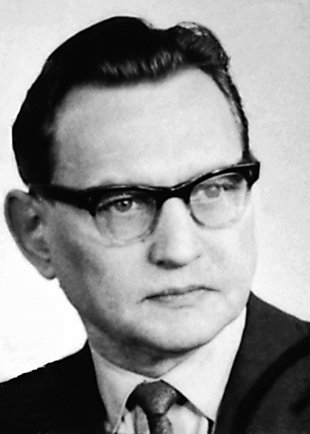 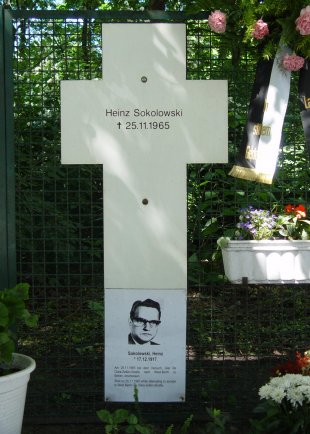 between the Reichstag Building and the Brandenburg Gate
on the sector border between Berlin-Mitte and Berlin-Tiergarten
He approached the inner-city border grounds from Clara-Zetkin-Strasse, today’s Dorotheenstrasse, on November 25, 1965 at around 5 o’clock in the morning. Although it was still dark outside a border guard posted on a watchtower on the corner of Clara-Zetkin-Strasse and Ebertstrasse noticed him.Heinz Sokolowski was 47 years old when he was shot and killed by an East German border guard while trying to flee from East Berlin to West Berlin early in the morning on November 25, 1965. West Berlin police heard the gun shots and saw the badly injured fugitive being carried away. [1] The dead man’s name and his tragic fate were also soon known in the West. In early December a writer living in West Berlin let a ministry official in Bonn know that his friend Heinz Sokolowski had written to him in October saying "that he wanted to try to reach the west side of the city because he could no longer bear living in East Berlin. He wanted to try and reach freedom near the Brandenburg Gate. One of his friends in East Berlin let me know that he was shot and killed at around 5 o’clock in the morning while trying to escape on November 25. […] As soon as we read the press reports that another fugitive had been shot down near the Brandenburg Gate we feared that it might be Heinz Sokolowski. Unfortunately it was. We were quite shocked." [2]

The author of those lines, Herbert Stargaard, had met the journalist Heinz Sokolowski in the early 1960s when they were both serving time in the Waldheim prison in East Germany. [3] Heinz Sokolowski had been serving the rest of a ten-year prison term that a Soviet military tribunal had sentenced him to in 1953 for supposedly engaging in espionage. An East German secret police report stated that even during the time when they were in prison together, Heinz Sokolowski had made no secret of the fact "that he wanted to go to West Germany after his release because he had no chance of making a living in East Germany." [4]

Heinz Sokolowski, who was born during the First World War in Frankfurt an der Oder and grew up in modest conditions in the Weimar Republic, was 15 years old when the National Socialists came to power in Germany. His tragic life was marked by the Second World War, Russian captivity and the political persecution he experienced during the post-war period. This was at least the impression made by the description of his life that he wrote after he was released from East German imprisonment. [5] He also wrote that he did a tailoring apprenticeship after completing elementary school and had attended a business school in order to qualify for the final secondary school examination. When he was offered the chance to work as an editing intern at the "Frankfurter Oderzeitung" in 1936, he gave up the idea of attending university and instead decided to pursue a career in journalism. Drafted into the army two years later, he served as a Wehrmacht soldier at various war locations during the Second World War, serving both as a war reporter and as a private on the eastern front. He was taken into Russian captivity at the age of 26, went through anti-fascist training and, like so many Wehrmacht soldiers, allowed himself to be won over by the communist cause for a time.

After returning to Germany he settled in 1946 in the Soviet-occupied sector of Berlin and worked during the following years as an independent journalist for radio and press on the east side of the city. He married in 1947 and lived with his wife and their daughter in Prenzlauer Berg until they were divorced in 1951. Although he was not a member of the party, he worked for the Soviet occupying powers’ communist-controlled media during this time. In early 1953, a breach occurred but the files do not indicate what led Heinz Sokolowski to distance himself from his political work or why he fell out of favor with the communists. What is certain is that he was arrested in East Berlin on February 12, 1953 and sentenced by a Soviet military tribunal on April 27, 1953 to twenty years in prison for supposedly having spied for the West and for possessing anti-Soviet literature. [6] After the prison sentence was reduced to ten years by the court of appeals, Heinz Sokolowski was sent directly to the Soviet Union to serve out the sentence. After spending three years in a work camp he was returned to East Germany in 1956 as part of the final repatriation of German war and civilian prisoners, but he was labeled a so-called "non-amnesty prisoner" and consequently had to serve the rest of his sentence in East Germany. [7] He spent time in various East German penitentiaries, including Bautzen, Brandenburg and Waldheim, where he contracted tuberculosis in early 1960, and was finally released in February 13, 1963. But contrary to what he had hoped, he was not released to the West but to his last place of residency, East Berlin.

With no contact with his family, in poor health and degraded to the job of elevator operator for an industrial company, Heinz Sokolowski tried to obtain an exit permit from East Germany with the explanation that he had distant relatives in the West. He must soon have realized that the East Berlin authorities were not prepared to let him go at any price. [8] His contact with a former political prisoner on the west side caused the state authority again to take an interest in him in March 1964. [9] It appeared that he also had problems at his workplace in May of the following year. According to a Stasi report he was "dismissed without notice for refusing to work in response to the company’s new regulation of the work norm." [10] Heinz Sokolowski began to prepare his escape a short time later. He searched for a suitable spot along the border grounds, equipped himself with ropes and blankets to climb over the wall and barbed wire, and gradually sold his personal belongings. He told his friends on the west side about his plans.

He approached the inner-city border grounds from Clara-Zetkin-Strasse, today’s Dorotheenstrasse, on November 25, 1965 at around 5 o’clock in the morning. Although it was still dark outside a border guard posted on a watchtower on the corner of Clara-Zetkin-Strasse and Ebertstrasse noticed him. Heinz Sokolowski continued undeterred towards his goal even after the guard fired warning shots. He triggered an alarm signal which alerted two other border soldiers who were on duty near the site of his escape attempt. He had already reached the border wall that was covered on top with barbed wire when one of the men began shooting at him. [11] Hit by a bullet in his abdomen, Heinz Sokolowski died a short time later from his injuries while on his way to the municipal hospital in Berlin-Mitte.

In the spring of the following year, the association "Working Group 13th of August" erected a three-meter-high wooden cross at the corner of Scheidemannstrasse and Ebertstrasse in honor of Heinz Sokolowski. [12] The inscription read, "after serving seven years in East German prisons he was shot while trying to flee," and made clear that he had been a twofold victim of communist injustice -- as a political prisoner and as a Wall fugitive.