Dieter Brandes was born in Frankfurt an der Oder on October 23, 1946 and grew up in East Germany. His childhood and youth were spent in an odyssey of state educational facilities. He lived for the first sixteen years of his life in various children’s homes and later moved into a home for young people in Bad Freienwalde. [37] He evidently tried to escape in June 1964 at the age of 17, but without success and as punishment was committed to a „youth work yard" in Sömmerda, Thuringia. East Germany used such facilities to try to re-educate non-conformist and delinquent teenagers and get them to accept the values and norms of the socialist state. [38] After Dieter Brandes was released at the end of 1964, he moved in with his father and stepmother in Frankfurt an der Oder and got a job as an untrained concrete worker. When he did not come home on June 9, 1965, his parents presumed that he had tried once again to make it to the West. According to Stasi files, they assumed that he was repeating his behavior of the previous year and planning to go to his biological mother in Hamburg with whom he corresponded by mail. [39]

Dieter Brandes did, in fact, travel to East Berlin on that June day. He was noticed in the evening by East German border soldiers on the grounds of the Nordbahnhof station in the Mitte district while trying to get through the border fortifications. The East German border troops noted that „fire arms were utilized to prevent a border breach." The soldiers and their superiors were commended for their conduct. [40] Dieter Brandes was badly injured and suffered from his bullet wounds for six months before he died in January 1966 in an East Berlin hospital. 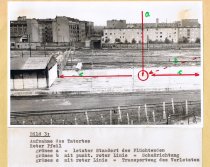 Dieter Brandes: West Berlin police photo of crime site [June 9, 1965] (Photo: Polizeihistorische Sammlung/Der Polizeipräsident in Berlin)
During his escape the 18-year-old had triggered a signal alarm in the patrol station of Border Regiment 33 at 9 p.m. A sergeant of the East German border troops responsible for checking on the other border guards in the surveillance area was alerted. The sergeant opened fire when the young man did not stop running even after he had ordered him to halt and had fired a warning shot. Dieter Brandes collapsed a few meters from the last barrier. [41]

Startled by the shots, West Berlin residents from the neighboring Ernst Reuter housing development watched from their windows and balconies as the badly wounded man was carried away by border soldiers. They saw his arms and legs dangling lifelessly. [42] On the basis of this information the West Berlin police concluded that a young man had been caught trying to escape and that he was „at least wounded, perhaps even killed." [43] The press reported on the failed escape the following day. [44] That evening a wooden cross was erected on Gartenstrasse. [45] The West Berlin police chief issued official charges against unknown individuals of Border Regiment 33. The incident was also entered into the Central Registry Office in Salzgitter. [46] This formed the basis for the investigation that the Berlin public prosecutor’s office re-opened in October of 1990. But the perpetrator could not be identified even after the East German archives were opened and the proceedings were dismissed on May 29, 1996. [47]

West Berlin observers presumed that Dieter Brandes had died immediately, but this was not the case. A bullet had shattered his breast cage and his lung was badly injured. After he regained consciousness following an operation conducted in the People’s Police Hospital, he was paralyzed. [48] Although he had not yet recovered, he was transferred on June 12 from the People’s Police Hospital -- where fugitives injured at the Wall were usually delivered so that they remained concealed from the public -- to the municipal clinic in Berlin-Buch. A medical evaluation of his condition conducted on August 31 stated: „The pat.[ient] is strongly altered psychologically, apathetic towards his treatment and his future. For this reason the pat.[ient] is not currently in a position to appear before the VP or speak with VP representatives. The patient, if he is still alive in six months, will not be able to endure prison in this condition." [49] After the doctors repeatedly ascertained that he was unable to withstand transport and could not be interrogated, the routine investigation over his „illegal attempt to leave" East Germany was discontinued on October 5, 1965. [50] Dieter Brandes’ condition continued to worsen until his circulatory system failed and he died on January 11, 1966. [51]

A note made in the file two weeks after his death sheds light on the Stasi’s methods. It stated that the hospital staff in his station had collected money for the young patient and given him a Christmas present. The Stasi lieutenant in charge went to great efforts to counter the „impression that Brandes was a ‘poor victim.’" He tried to portray him instead as a „criminal and asocial element". He even went so far as to claim „that Brandes had employed violence during his attempted border breach and injured border soldiers." [52] It is not known whether the hospital staff believed this fabrication.

The East German judiciary authority files show that Dieter Brandes’ father was informed that his son had incurred major bullet wounds while trying to escape. [53] He was also permitted to see him in the hospital. After his son’s death, he signed a statement under pressure from the Stasi, waiving his right to have the urn sent to his hometown. The Stasi had Dieter Brandes’ human remains buried anonymously in a grave in the Baumschulenweg Cemetery. [54] 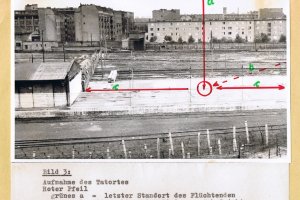