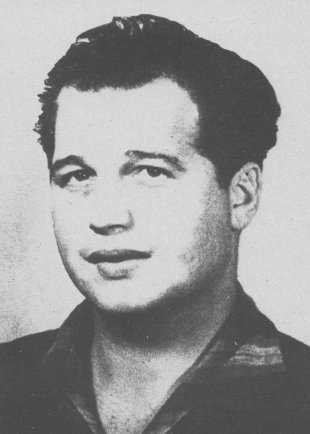 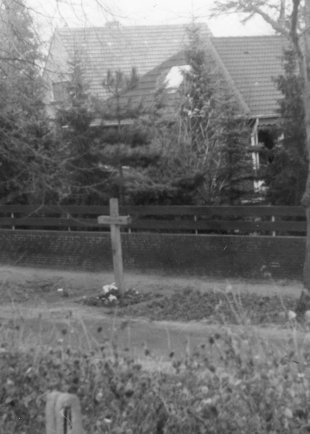 Willi Block: Removing the dead man from the death strip [West Berlin police photo, Feb.7, 1966] (Photo: Polizeihistorische Sammlung/Der Polizeipräsident in Berlin)
Willi Block, born on June 5, 1934 in Berlin, trained to become a construction worker and served in the East German border police from 1954 to 1959. During these years he attended sergeant school, became a tank commander and in the end worked as an instructor in Wismar. By the time he was released he had acquired the rank of staff sergeant and was a member of the Communist Party. As an active member of a worker’s militia, he was also involved in building the Berlin Wall in 1961.

His internal knowledge of the border police was no doubt helpful to him in planning his three escape attempts. He fled the first time to West Berlin on January 13, 1962, five months after the Wall was built. He returned to East Germany a month later to pick up his wife. He was arrested, but got off relatively lightly. He was put in a re-education and work camp, but was released after six months thanks to the intervention of his father who was a devout communist, apparently with influence. [31] In the camp he agreed to cooperate with the Stasi as a secret informant (GI) and was expected to deliver reports from the Blankenfelde repatriation camp, but evidently he refused to take on concrete spy missions. [32]

On August 18, 1962 he fled a second time to West Berlin. He informed the authorities there of his recruitment by the Stasi and that he had provided the Stasi with information about the refugee camp in West Berlin. Consequently, the (West) Berlin superior court of justice charged him with violating the freedom protection law. [33]

Willi Block returned to East Germany again in December 1962 when he learned that his wife wanted a divorce. He had not suffered any legal consequences for his first escape attempt, but this time he was considered a traitor and was arrested under the charge that he had engaged in espionage for the western secret service. In April 1963 he was sentenced to five years in prison, a term he served in Bautzen. [34] He was released early in November 1965 and was forced to accept a job that the state assigned to him at the Staaken concrete plant located near the border. There was often friction between him and his supervisors. [35]

On February 7, 1966 Willi Block got so drunk during his shift that he was not allowed to continue working. The last time a colleague from work saw him, he was sleeping on a cot in the lounge at around 3 p.m. [36] He must have made the decision to flee again to West Berlin a short time later. He set off in broad daylight and, unnoticed, was able to pass the interior security fence and a dog run at a site near the border crossing to the West Berlin district of Spandau. The watchdogs did not attack him. In fact it looked more like they were greeting an old acquaintance again. [37] He continued toward the anti-vehicle trench. Two border soldiers on a watchtower noticed him at around 3:45 p.m. They shot a flare and curtain fire. Bullets hit the ground in front of Willi Block, but he was undeterred and tried to crawl beneath the three rolls of barbed wire that separated him from West Berlin. When his clothing got entangled in the second roll of wire, he was unable to move and remained stuck, lying on his stomach, beneath the barbed wire.

Meanwhile customs officials and police arrived on the West Berlin side with an ambulance. They tried to establish contact with the fugitive. Willi Block called out to them that he was injured. He also mentioned the name of his brother who lived in West Berlin and told them to send him his regards. When Willi Block asked them to provide him covering fire they explained that he had to reach West Berlin first, to which Block responded: „Then I’ll just have to go to jail." [38] As more and more border guards appeared on the east side with their machine pistols ready to fire, the West Berlin police began loading their weapons and taking cover behind the trees. By this time photo reporters had also arrived at the site on the west side.

On the east side the six border guards were joined by the commander of the border regiment. When Willi Block raised his hand, they shouted: „Stay down, don’t move." An officer called out from the anti-vehicle trench: „Come back!" The man caught in the wire answered: „I can’t."

It was a strange situation: Before the eyes and ears of the armed western police, Willi Block, encircled by East German border guards with their guns ready to fire, was firmly caught in the barbed wire. Nothing happened for a few minutes: The police on the west side were unable to intervene and Block was unable to move either forward or backward. The regiment commander, the highest ranking soldier among the border guards, appeared overwhelmed by the task of freeing the fugitive from the barbed wire and arresting him.

„Shoot me already, you dogs," Willi Block called out to the border guards and tried one more time to free himself from the barbed wire, shifting forward, toward West Berlin. [39] He managed to move just a few centimeters when suddenly a hail of bullets flew at him. A number of border guards opened fire, including the regiment commander who fired his pistol until the magazine was empty. Since his shots missed the fugitive he demanded a machine pistol. A guard gave him his Kalashnikov and the regiment commander fired from a distance of 15 meters at the defenseless man lying on the ground. A total of seventy-two shots were fired. Four bullets hit Willi Block; one of them was fatal.

Willi Block, shot dead in cold blood on 7 February 1966 while trying to escape at the Berlin border (Photo: Polizeihistorische Sammlung/Der Polizeipräsident in Berlin)
The border guards had to use a wire cutter to disentangle the body from the barbed wire and bring it to the regiment headquarters by ambulance. Two border soldiers on their way to their barracks caught a glimpse of Willi Block’s blood-covered body lying on the truck and spontaneously decided to flee. They did not want to find themselves in a situation where they would have to shoot at a fugitive. [40] That very evening they escaped together to West Berlin and reported on the incident. For days the West Berlin media reported in depth on the shots fired in Staaken. [41]

Three days later a Potsdam state attorney informed the victim’s father that his son „had died during a self-inflicted border breach attempt," and forced him to sign a statement agreeing to keep the circumstances of his son’s death a secret and to accept an urn burial on the Baumschulenweg Cemetery. Only then did he receive his son’s personal possessions. [42]

Willi Block: MfS photo of the memorial cross near Finkenkruger Weg on the West Berlin side [August 1978] (Photo: BStU, MfS, HA I Nr. 3637, Bl. 58)
In 1993 the chief of staff, two border guards and the commander of the 34th Border Regiment were charged with attempted manslaughter. The chief of staff and the two border guards were acquitted by the Berlin district court in January 1995. Although the judges had their doubts about their version of the events -- they claimed to have only fired warning shots or intentionally aimed to miss the fugitive -- it was not possible to prove "that they had aimed their shots at the victim or acted jointly with the gunman." [43] Even in the separate trial against the regiment commander, the court failed to determine who had fired the fatal shots although it was assumed with a high degree of probability that he was the gunman. He was first convicted of attempted manslaughter, but upon objection of the public prosecutor, the Federal Court of Justice ultimately sentenced him as the direct perpetrator, accomplice or sole perpetrator of manslaughter to three years in prison without probation. [44] The Berlin district report stated that his conduct at the scene of the crime bore the „character of an (attempted) execution." [45] 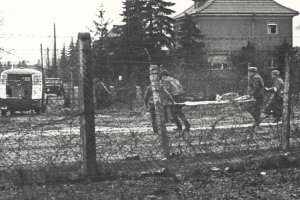 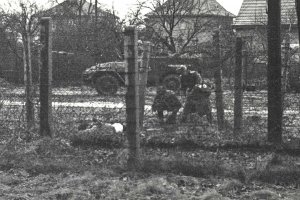 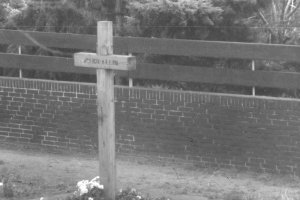