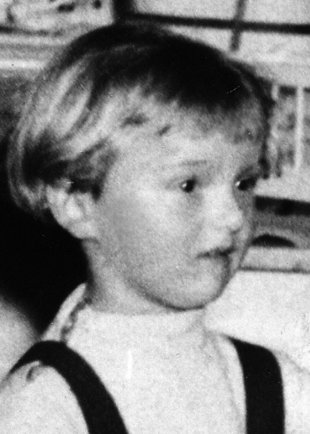 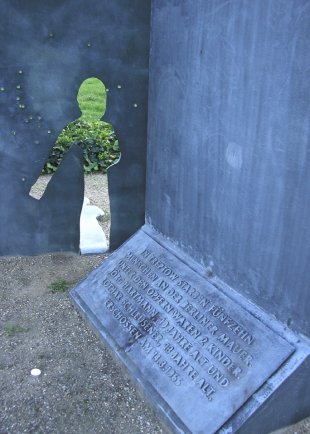 on Kiefholzstrasse near the "Sorgenfrei" garden settlement
on the sector border between Berlin-Treptow and Berlin-Neukölln
The only existing official document recording what happened that evening states that the injured victims "were retrieved and transported to the People’s Police Hospital by ambulance. One of the two border violators died from his injuries; the other one was interrogated in the People’s Police Hospital and said that he came from the Friedrichshain district."In November 1997 the Berlin district court pronounced a former border guard guilty of manslaughter in the deaths of Jörg Hartmann und Lothar Schleusener and sentenced him to 20 months probation. [1] The defendant had confessed that he and another border guard, who had passed away by then, had shot at the children on March 14, 1966. [2] From where he was stationed on the observation tower in an area known as "Grenzknick," he had noticed a human shadow and thought he saw a person who was trying to get out of the anti-vehicle trench but who kept slipping back down into it. In order to stop the suspected fugitive, he ordered the other guard to climb down from the tower to "secure" the grounds and then he opened fire because he did not know what else to do and felt this was his duty. He fired a total of forty bullets. The guard later explained that when he stopped shooting and descended from the tower and saw the children, he was "totally shattered" and knew immediately that it had been wrong to shoot like crazy. [3]

The only existing official document recording what happened that evening states that the injured victims "were retrieved and transported to the People’s Police Hospital by ambulance. One of the two border violators died from his injuries; the other one was interrogated in the People’s Police Hospital and said that he came from the Friedrichshain district." [4] Nowhere does the report acknowledge that the victims were children. It does not mention their names or the fact that Lothar Schleusener, the older of the two boys and the one who was supposedly capable of being interrogated, died the same night. 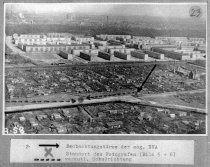 Lothar Schleusener: West Berlin police photo of the border territory between Berlin-Neukölln and Berlin-Treptow with direction of fired bullets marked [March 14, 1966] (Photo: Polizeihistorische Sammlung/Der Polizeipräsident in Berlin)
Lothar Schleusener was born in East Berlin in 1953 and grew up with his older sister in the Friedrichshain district. His father was an electrician; his mother worked as a seamstress for the state-owned company "Fortschritt" (Progress) in Berlin-Lichtenberg. The parents were divorced in 1965, but were still living in the same apartment in March 1966 when their son died. Lothar Schleusener’s sister recalled that their mother had occasionally worked on the west side of the city before the Wall was erected. [5] They had relatives there that used to send them "west packages" at Christmas time during the first years after the border was closed. The area where they lived was a poor neighborhood, called "Hinterland" or rear area. The people who lived in the so-called "Vorderland," (front area) were mostly party members and better off. Since both parents worked, Lothar and his sister were often left to themselves. They enjoyed spending time in the family’s garden house where they had animals and even spent the night there sometimes in summer.

Lothar Schleusener had been missing for days before his mother was officially informed that he had died from an electric shock in Espenhain near Leipzig. A death certificate from the Leipzig registry office apparently certified this. [6] In private Lothar Schleusener’s parents doubted whether the information provided by the authorities was true. They could not explain how their son had ended up in Leipzig, but because they feared reprisals, they did not dare express their mistrust openly. [7] Lothar Schleusener’s sister said that their mother basically knew that she had been lied to. Her mother knew that western radio had reported that two children were shot at the Wall on the day her son had disappeared. Out of grief and fear she never spoke about the death of her son and asked her daughter not to speak of it or ask any questions.

Because the mother had been given a falsified death certificate, the Berlin public prosecutor’s office, in addition to prosecuting the border guards, tried to introduce proceedings for false certification. But the case was dismissed without results in August 1997 because no documents could be found providing information on a possible perpetrator in the files of the border troops, Communist Party or Stasi. [8] 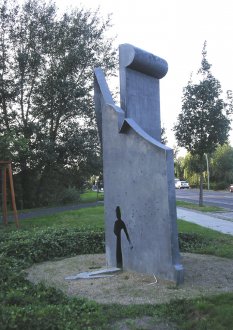 Lothar Schleusener: Memorial erected in November 1999 for Jörg Hartmann and Lothar Schleusener on Kiefholzstrasse (photo: 2007) (Photo: Christine Brecht)
Informer reports, however, show that after the incident, the Stasi kept surveillance on the border guards who had been on duty at the time. It was criticized that "the attempted border breach of the children at ‘Grenzknick’ was not kept as secret as had been desired. It had already spread around our unit […] before the guards involved were sworn to secrecy. Afterwards there was all kinds of talk in our room." It was said that the two guards had "wept." Had they been more attentive, "the border breach could have been prevented without the use of fire arms." [9]

Lothar’s sister later remembered that her brother had been particularly fond of animals. He was a friendly and caring young boy who had badly wanted to be big and strong. He liked to imagine how he would drive his grandmother around in a car when he was older. Shortly before he disappeared he confided to his sister that he wanted to go to West Berlin with a friend to visit relatives. He promised to bring her back something nice from over there. At the time she had not taken his words seriously. Only after the Wall fell did she realize how serious he had been. [10]

Lothar Schleusener was buried at the cemetery on Friedensstrasse in Berlin-Friedrichshain. Only his parents, grandparents and sister were present at the funeral.