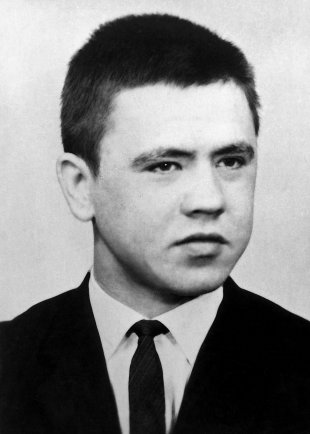 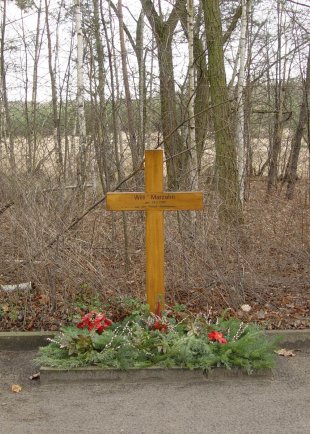 near Steinstücken/Kohlhasenbrück
on the outer ring between Potsdam-Babelsberg and Berlin-Zehlendorf
They reached the wooded border grounds unnoticed and crawled under a signal fence near Steinstücken at around 6 a.m. Although they set off an alarm, the guards on duty did not react immediately. Eberhard M. shot one watchdog and choked another within the security strip.Willi Marzahn, born on June 3, 1944 in Jüterbog, studied to become a locomotive mechanic after he finished school. He had lived with his wife and child in Schwedt an der Oder since 1964 and had worked as an engine fitter in the central workshop of the crude oil refinery there. [1] That same year he enlisted for three years as a soldier in the East German National People’s Army and began his military service on November 3, 1964. He was politically discreet and regarded as a loner in his "barracks collective." [2] Assurances were made to him when he enlisted that he would be placed in an armored unit close to his home after he completed his basic training, but this did not happen. Instead he was sent as a weapons master to a mobile guard unit in Stahnsdorf, southwest of Berlin. At that time the trip from there to Schwedt by public transportation took almost a day; this meant that he was unable to see his family when he had time off.

He made a number of transfer requests because he was concerned that his marriage might fall apart under these conditions, but his requests were either left unanswered or rejected. Then Willi Marzahn tried to reverse his three year military commitment. He wrote a letter in February 1966 requesting to be released from duty: "My basic military service comes to an end in April and now my wife says that if I don’t come home she is going to divorce me. [...] Since I enlisted under preconditions that differ from those that currently exist, I do not think it is right to require me to continue. This is why I am distancing myself from my commitment. I am married and have a child and if my marriage suffers or breaks up because of this commitment then my service does not make much sense." [3] The army brushed off this petition as "dismissal psychosis." [4]

His supervisors paid no attention to Willi Marzahn’s problems although they were clearly serious. They ignored his complaints about chronic headaches after suffering a concussion and an operation on his inner ear, his constant use of painkillers and sleeping pills and even a suicide threat. In early March 1966, quite unexpectedly and without explanation, he wrote a letter to his wife asking her for a divorce. [5] He may have really meant it, but it may also have been a deceptive maneuver to prevent his wife from being accused of having known of his plans: Apparently the 21-year-old was already thinking of fleeing.

Willi Marzahn: MfS photo of crime site between Potsdam and Berlin-Zehlendorf [March 19, 1966] (Photo: BStU, MfS, AF 431/78, Bl. 117)
The two sergeants, Willi Marzahn and Eberhard M., both had time off on March 18, 1966 and were permitted to leave the barracks until 6 o’clock the next morning. They had discussed their escape plan the previous week and now were ready to go through with it. They spent the evening together at a bar in Potsdam and returned to their barracks in Stahnsdorf at around 3 a.m. Willi Marzahn entered the building alone and took the key to the armory, supposedly to do a weapons check. He then opened the window of the armory and handed Eberhard M. two "Kalashnikov" machine pistols, three "Makarov" pistols and some ammunition. They took the weapons and ammunition to the fence and the two soldiers signed out again for the rest of their time off. They put their weapons through a hole in the barracks fence and then picked them up. Then they walked for a few hours through the woods, sometimes along a road, towards the border strip near Kohlhasenbrück/Griebnitzsee.

They reached the wooded border grounds unnoticed and crawled under a signal fence near Steinstücken at around 6 a.m. Although they set off an alarm, the guards on duty did not react immediately. Eberhard M. shot one watchdog and choked another within the security strip. As they continued they touched a wire on the signal device, setting off a flare. Leaving the protection of the woods, the two soldiers then ran through the death strip to a spot that was 250 and 500 meters away from the next watchtowers. Only then were they seen by the border guards on duty. [6] There was an exchange of fire between the fugitives and the border guards. Eberhard M. was able to climb over an anti-tank obstacle, get through the last barbed wire barrier and reach West Berlin territory, but Willi Marzahn was found in front of a tank trap wall with a bullet through his head. [7] He was retrieved at around 6:30 a.m. and brought to the nearby Drewitz Army Hospital. [8] He died from his injuries at 8 in the morning without ever having recovered consciousness. [9]

The residents of the West Berlin exclaves Steinstücken and Kohlhasenbrück were startled by the gunshots fired in the early morning. One bullet hit an open window casement of a nearby house. [10] One witness heard someone call from the death strip in between shots, "Help, you’re going to shoot me dead." [11] The Stahnsdorf Mobile Guard Battalion made a statement on April 13, 1966 that said: "Marzahn got the punishment he deserved when he paid for his crime with his life." [12]

Willi Marzahn was buried in the presence of his family and under the surveillance of the East German secret police on March 23, 1966 at the cemetery in his hometown of Jüterbog. A memorial cross with the inscription: "Willi Marzahn, 19.3.1966, shot while trying to escape" was later erected in the Berlin district of Zehlendorf to commemorate the dead fugitive.

Neither the East German military state prosecutor, nor the East German secret police, nor the Berlin public prosecutor after 1990 was able to determine who had shot Willi Marzahn. The guards saw Willi Marzahn collapse after they fired shots. The autopsy first declared that a Kalashnikov bullet shot from a distance was the cause of death but a second examination called for by the Stasi came to the "reliable assumption" that his death was caused by a "very close shot" from a Makarov pistol that was found lying next to the dead man. [13] Since the border troops failed to conduct an "orderly investigation of the crime scene" and neither fingerprints on the weapon nor footprints were secured, it remained ambiguous whether Willi Marzahn was shot or whether he may have committed suicide as the Stasi insisted. [14]

Due to the conflicting witness accounts the public prosecutor’s office in Berlin was unable to determine with certainty after 1990 whether the border guards or the fugitive had fired the first shot. [15] Consequently the case against the accused border soldiers was dismissed in 1992 according to the principle "in dubio pro reo."