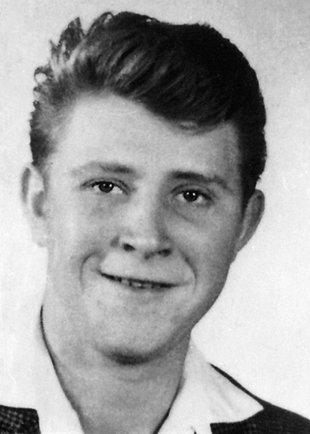 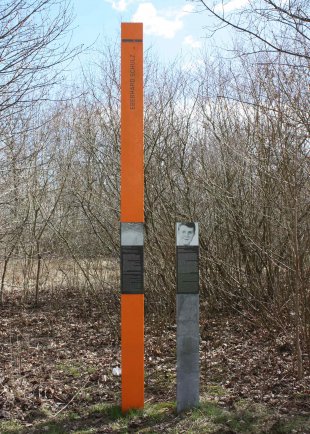 Eberhard Schulz was born on March 11, 1946 in Glasow, Brandenburg. After his parents separated, he lived with his mother and four siblings in Brusendorf, south of Berlin. After completing school he worked as an unskilled farmhand on a state-owned farm in Boddinsfelde. [25] He often spoke with his friend Dieter K., who worked for the same company, about the different living conditions in the East and West. Eberhard Schulz was able to compare them because one of his brothers lived in West Berlin and managed very well there. Without making any concrete plans, the two young men occasionally discussed the possibility of fleeing to the West, with Dieter K.’s special knowledge playing a key role. In 1964/65, houses in Grossziethen that were situated close to the border stood in the way of the security strip. When they were torn down Dieter K. had been involved in removing the construction debris. At that time this temporary section of the border grounds consisted merely of rolls of barbed wire and a mesh-wire fence. That is how Dieter K. remembered the border and he thought it would be easy to get through. [26]

When he spoke about this among a larger group one evening over a beer, a few of the young men present decided they wanted to try to flee, but the two friends thought this was too risky. They wanted to flee together but without the others. By the end of March 1966 their plans had become more concrete. They set their escape date for the night of March 30. Late in the evening on March 29 they took a bolt-clipper from the company workshop and began the trek by bike from Brusendorf to Grossziethen, a distance of almost twenty kilometers. [27]

On March 30, at around 3 a.m., they parked their bikes close to the border and continued by foot, orienting themselves to the illuminated highrises on the west side. They lost the bolt-clipper somewhere along the way and thus had to continue their escape without any tools, and the border facility they encountered was no longer as primitive as Dieter K. had remembered its being. This section of the border now contained 64 signal devices, ten watchdogs and a functioning signal fence; the death strip was a good 250 meters wide and illuminated by arching lights. [28] Dieter K. managed to crawl under the interior fence but triggered an alarm soon after that. Flares suddenly shot into the air. Petrified, the men ducked into the grass. Dieter K. was already on the other side of the first fence, but Eberhard Schulz was still in front of it. Apparently he had lost his nerve and had not followed his friend through the fence. Neither of them dared move. Dieter K. did not stand up until three border guards were standing in front of him and ordered him to get up with his hands in the air. Eberhard Schulz thought the order was directed at him as well, so he got up. But the guards had not yet noticed him. He appeared from behind the fence within the border grounds as a dim silhouette in the dark about 15 meters away. [29]

There are two versions of what happened next: one from Dieter K. and one from the border guards. Dieter K. said a border guard began shooting from the hip at Eberhard Schulz without calling out or firing a warning shot. Then a second guard called out "stop shooting!" [30] In the soldiers’ version, both "border violators" had been "extremely confrontational and stubborn" and had engaged in "passive resistance." [31] They claimed that Eberhard Schulz suddenly ducked, reached for something in his jacket pocket and began to run, after which the guards aimed automatic fire at him, supposedly to "prevent a possible attack on a guard or an escape." [32] What is certain is that two shots hit Eberhard Schulz in his face and neck and that he was dead immediately. [33]

The border guards’ version is not very plausible. The escape attempt had failed and both fugitives, having been noticed and confronted with the superiority of three armed guards and more approaching, stood rooted to the ground in fear. [34] Why would Eberhard Schulz have tried to continue his escape or evade arrest in this hopeless situation after having voluntarily surrendered to the border guards?

Eberhard Schulz’ body was retrieved and transported to the forensic institute in Charité Hospital about twenty minutes later. The East German secret police informed his mother of her son’s death the next day. Dieter K. was arrested and brought to the Stasi remand prison in Potsdam. The Potsdam district court resided upon by Judge Wohlgethan found him guilty of "a collective attempt to illegally leave East Germany" and sentenced him on June 1, 1966 to two years in prison which he served in the Stasi prison in Berlin-Hohenschönhausen. [35]

While conducting research in the Military Interim Archive in Potsdam in 1991, the Berlin police came upon border troop documents concerning the incident on March 30, 1966. Preliminary proceedings were opened the same year against the East German border guards involved. Despite extensive research and interrogations, the police were unable to clarify without a doubt the exact circumstances under which the shots were fired. Statements by the border soldiers and by Dieter K. stood in direct opposition to one another and sometimes contradicted the border troop and Stasi reports written at the time. The public prosecutor’s office concluded to the benefit of the suspected border guard – who denied having had any intention of killing – that "he must have acted out of putative self-defense." Dieter K.’s presentation of the facts did not justify a conviction. [36] The case was dismissed in November 1996 and the shooting of the 20-year-old Eberhard Schulz remained unpunished by law.