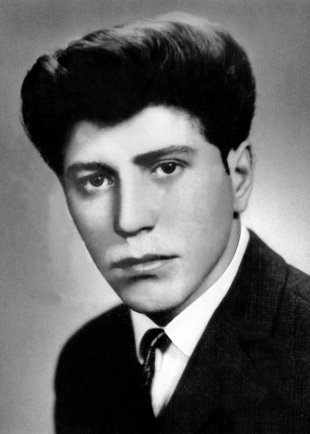 at the Teltow Canal in Johannisthal
on the sector border between Berlin-Treptow and Berlin-Neukölln
Michael Kollender was only a few meters away from the border line and continued crawling forward. No less than 109 shots were fired by the border guards. They were not poor marksmen and could have hit him had they wanted to do so.It was a mild night in late April. The border guards on the Teltow Canal were in good spirits because they were going to be discharged in a couple of days and only had an hour left of the shift that evening. Although it was against the rules they stood together and chatted. The young men were expressing their relief over the fact that no attempted escapes had occurred while they were on duty and that they had not had to make use of their weapons. [1] At about 3:45 in the morning the flare signal „5 star white" was suddenly set off near the watchtower at Wrede Bridge. They saw the shadow of a fugitive in the light of the flare. One of the border soldiers thought he recognized fatigue clothes, the summer uniform of the National People’s Army. A moment later he realized that the fugitive was holding a gun in his hand.

Michael Kollender: West Berlin police crime site photo of guard tower in the border territory with direction of fired bullets marked [April 25, 1966] (Photo: Polizeihistorische Sammlung/Der Polizeipräsident in Berlin)
Michael Kollender, born on February 19, 1945 in Silesia, grew up in a Catholic family as the oldest of three children in Oberlungwitz, Saxony. He worked as a tractor driver in the machine and tractor station of a neighboring town. He was drafted into the National People’s Army in early November 1965 where he was trained as a gunner in the anti-aircraft missile regiment of the air force. He was scheduled to participate in the May Day Parade in East Berlin on May 1, 1966. [2] This could not have pleased the Catholic soldier, who was regarded by his supervisors as „pigheaded." In one report it stated that he was „extremely undisciplined," engaged in „discussions over orders" and carried out „his duty grudgingly." [3] Kollender had thought about fleeing ever since he had joined the army. He evidently had once confided in his younger brother that „he was going to cross the border to West Berlin illegally if he ever had the chance." [4]

When they saw the fugitive, the four guards removed their machine guns from their shoulders and set the safety lever on automatic fire. They pursued him and encircled him, firing scores of salvos into the air to try to get him to surrender, but Kollender continued crawling through the security strip and had only one more barrier to cross – the triple barbed wire fence. The bank slope of the Teltow Canal behind it already belonged to West Berlin. As they caught up with the fugitive, the border guards fired curtain fire parallel to the border to prevent him from getting farther away. „Man, stay down!" a guard called out to him. [5] Michael Kollender was only a few meters away from the border line and continued crawling forward. No less than 109 shots were fired by the border guards. They were not poor marksmen and could have hit him had they wanted to do so. The shots could be heard from quite a distance. The crew of a barge on the canal was so startled that they lay down on the floor of their cabins. [6] A shot hit Michael Kollender in his head. It may have been aimed directly at him, or it could have ricocheted off the concrete post of the border fence. He remained on the ground motionless two or three meters from the barbed wire fence. The border soldiers dragged the injured man into the trench, administered first aid and notified their headquarters. Michael Kollender had not fired a single shot from his unlocked machine pistol.

That same day one of the border guards was awarded the „Medal for Exemplary Service at the Border." Each of the other three was awarded a gold wristwatch. [7] The NVA city commander Poppe reported to Communist Party Politburo member Erich Honecker that the border soldiers had exhibited „correct," „consistent" and „exemplary" conduct. [8]

In the fall of 1995 the guard presumed responsible for the fatal shot was acquitted by the Berlin district court because „desertion is a legal wrong that is criminally prosecuted in accordance with the rule of the law." By deserting, Michael Kollender had allowed for a „legitimate legal claim to prosecution by the responsible East German organs." [9] Hence the border guard did not act in a manner contrary to the law. [10] Shooting NVA deserters was legitimized by the highest judicial authority during proceedings on appeal before the Federal Court of Justice: The court stated that according to the East German military law of 1962, military desertion was regarded as a crime. Killing a deserter was therefore excusable because, in this „special case," the illegality of the marksmen’s action could not have been evident to them. [11]

Two days after his death, NVA officers informed Michael Kollender’s parents that he had been shot and killed while trying to escape. [12] They did not learn any details but were „advised" to keep quiet about the circumstances of their son’s death. The files that the family had concerning his military service were confiscated.