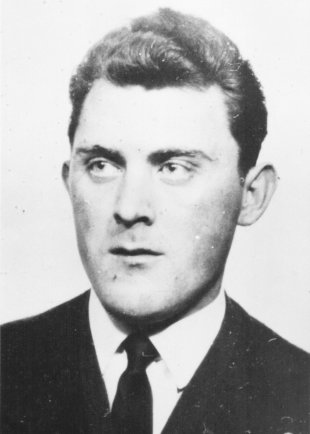 Paul Stretz, born on February 28, 1935 in Luitpoldshöhe, Bavaria, lived in Ottensoos near Nuremberg with his wife. The couple suffered a severe blow in October 1960 when their first daughter, Karin, died at the age of three months. Paul Stretz’s wife left him because of his drinking problem in November 1961, shortly before their second daughter was born. He continued to live in Ottensoos for a time, but did not maintain contact with his family or pay child support. [33] Then he moved to West Berlin, but did not have a permanent residence there. His last job was working in the warehouse of a shipping company. [34] The divorce was settled in January 1966.

On April 29, 1966 Paul Stretz was working with other colleagues at the Spandauer Schifffahrts Canal where the border ran along the West Berlin canal embankment. It was a hot day and Paul Stretz had quenched his thirst with beer. He was more than a little drunk when at around 3:30 p.m. he came up with the idea of taking a swim in the canal. [35] He descended the steps in the canal wall and splashed in the water. His colleagues, watching from above, warned him that the waterway belonged to the east side of the city and that swimming there was dangerous.

Paul Stretz: East German border troop photo – People on the West Berlin bank of the Spandauer Schiffahrts Canal observing the events [April 29,1966] (Photo: BArch, VA-07/6014, Bl. 14)
Paul Stretz did not take any notice of this. He got undressed and swam a few meters out to the middle of the canal. A customs official also tried to get him to come back, but also failed to stop him from enjoying his swim. A number of witnesses reported his last words: "Snipers? Who cares. The water is so warm!!" [36]

Paul Stretz: East German border troop photo – West Berlin police, firemen, customs agents and military police on the West Berlin bank of the Spandauer Schiffahrts Canal [April 29,1966] (Photo: BArch, VA-07/16935, Bl. 1)
The strong current began to cause him difficulty when he was ready to swim back. He swam behind a boat and when it passed, he came into view of two border guards posted on the watchtower who thought he was an East German fugitive who had almost reached the West. The watchtower was about 250 meters away. The swimmer would not have heard a warning call. Both border guards began to shoot at Paul Stretz who dove under the water in an effort to evade the shots.

Paul Stretz: East German border troop photo – Journalists on the West Berlin bank of the Spandauer Schiffahrts Canal [April 29, 1966] (Photo: BArch, VA-07/16935, Bl. 6)
His work colleagues took cover from the flying bullets. When one of the guards was unable to prevent his machine gun from shaking under automatic fire, they exchanged weapons and continued to shoot. Two other border soldiers who were on patrol heard the shooting and ran to the watchtower and saw the swimmer and what was going on. They rushed to the canal bank and began shooting directly at him from there. A ricochet bullet hit one of the guards in the arm and he stopped firing. [37] A total of 176 bullets were fired. They hit the West Berlin side, striking a window of the Reichstag building, a VW bug and an educational institution. [38] Four bullets hit Paul Stretz in the back of the head, chest and upper arm. He died immediately and sank into the canal. [39] A short time later an East German border troop boat arrived to retrieve the body from the water. Angry West Berliners began throwing stones at the boat. [40] The search was discontinued until nighttime. At around 11:15 that night, East German divers, unnoticed by anyone on the west side, found the body and brought it to the forensic institute of Charité Hospital for an autopsy. [41]

In 1997 the guards who shot Paul Stretz were sentenced by the Berlin district court to one year in prison commuted to probation. [42]

The death of Paul Stretz and the shooting on the Spreebogen, in the heart of the city, caused quite an uproar. West Berlin police, firemen, customs officials and British military police arrived at the scene soon after the shooting. The incident received considerable political and media attention as a consequence of the ongoing talks between the East German Communist Party and West German Social Democrats concerning a planned exchange of speakers. [43] West Berliners organized a number of protest actions against the shootings at the Wall. A banner was put up at the site where Paul Stretz died with the inscription: "Murder! Should the world point its finger at us Germans again?" [44] In contrast, the East Berlin press depicted the incident as a "provocation against the East German state border." [45] Paul Stretz was presented as a victim of an "organized, targeted-oriented (political) attack" [46] by West Germany against East Germany.

Although the East had learned from western newspaper articles the name of the man who was shot, he was buried as "the unidentified dead man" at the municipal cemetery in Berlin-Marzahn in early May 1966. [47] All efforts to have the human remains delivered to his mother in his hometown failed. [48] 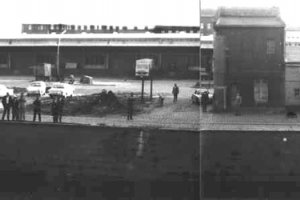 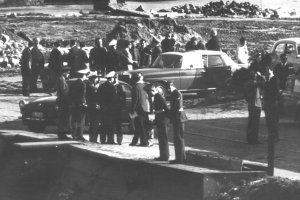 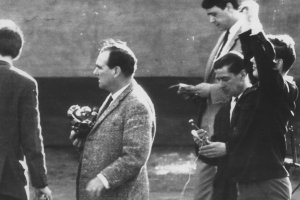