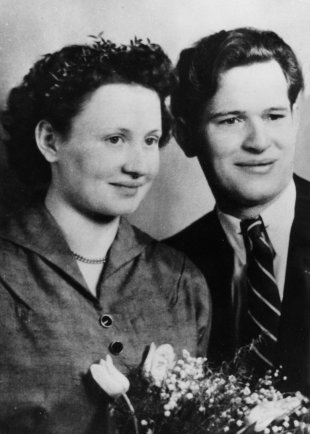 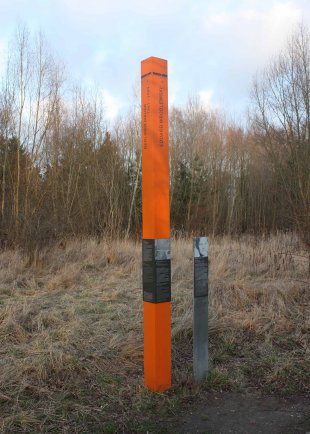 on the outer ring between Mahlow (Zossen district) and Berlin-Tempelhof
He probably had had a few drinks to boost his courage before he entered the border area early in the evening at the closed-down S-Bahn tracks that once led from Mahlow to Lichtenrade. He came within 100 meters of the last three-tiered barbed wire fence unnoticed. Then suddenly, without any warning, the first shots were fired.Three very different worlds intersected in the south of Berlin one summer evening in July 1966 during an escape attempt that ended in the death of a fugitive. Plagued with worries and problems, the 33-year-old family man Eduard Wroblewski, who came from an area near the Lutheran town of Wittenberg, was looking for a way to escape East Germany. Five border soldiers, aged 18 to 22, opened fire on him with their machine pistols to hinder his escape. Residents of the nearby West Berlin district of Lichtenrade, who were eating in their gardens or watching the semi-final of the World Cup championship between England and Portugal on television, became involuntary witnesses to one of the most brutal shootings to have ever taken place at the Wall. The border guards fired no less than 274 bullets in quick succession. [1] Twelve shots hit Eduard Wroblewski from behind, killing him immediately.

The residents on the West Berlin side of the Wall watched as his lifeless body was hastily carried away and they yelled loudly at the border guards, calling them "murderers" and "pigs." There was also strong outrage because a number of bullets flew to the West Berlin side, hitting houses, rooftops, windows and even a living room wall. [2] The Minister of the Interior Heinrich Albertz and the American city commander John Franklin both condemned the brutal and reckless use of firearms. [3] As part of its campaign "Studio at the Barbed Wire," the West Berlin Senate produced posters with the words: "Soldier, that was murder! Did you think about his mother?" 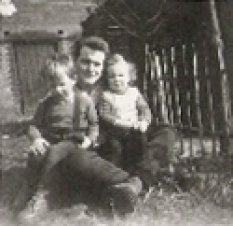 Eduard Wroblewski (Photo: private)
The West German authorities received information about the man who was killed a short time later. Eduard Wroblewski’s brother, who lived in Hamburg, had learned of the killing from relatives in East Germany and was certain that his brother was the man shot at the Wall that July evening. [4] His brother had been living in Zahna, a town in the Wittenberg district, halfway between Berlin and Halle. Born in 1933 in Wutschdorf, previously the Prussian district of Züllichau-Schwiebus, he came from a large family that settled in the Fläming Heath before the Second World War. Eduard Wroblewski left school at the age of 14 and found work on a farm. He was evidently not an enthusiastic supporter of socialism, neither as a teenager and nor as an adult. This probably had to do with the fact that his older brother had been caught in the wheels of the arbitrary justice system and had been convicted of supposedly engaging in espionage and sent to the Soviet Union to serve his sentence. Eduard Wroblewski tried to flee to West Germany in 1952 when he was 19 years old but, like so many young East Germans who tried their luck in the West without any job skills or support from relatives, he was unable to gain a foothold. [5] This remained a short interlude and after nine months he returned to East Germany.

He worked as a trackman for the East German railroad company for a time. Later he found jobs in agriculture and construction. His first marriage, in 1956, ended in divorce. He married his second wife in 1962 and they had a son and a daughter. [6] But he soon began having problems with his supervisors and the authorities, which put a strain on the marriage. [7] He was dismissed from another job in July 1966. When he left the house on the morning of July 26, 1966, his wife thought he was going to work in the Zahna mosaic plate factory. In truth, however, he headed for Mahlow, a suburb in the south of Berlin, without giving his family any explanation. He probably had had a few drinks to boost his courage before he entered the border area early in the evening at the closed-down S-Bahn tracks that once led from Mahlow to Lichtenrade. He came within 100 meters of the last three-tiered barbed wire fence unnoticed. Then suddenly, without any warning, the first shots were fired. He ran and was able to get past the first two rows of fences before he was hit from behind and collapsed in the barbed wire.

After the incident the border troop leadership and Stasi not only investigated the victim and his relatives, but also put the border guards involved under immediate surveillance. [8] At the same time the border guards were awarded the usual honors for acting "with determination" and in a "tactically correct" way to ensure the "inviolability of our state border." [9] Poor marksmanship and excessive use of munitions was criticized but not questioned. [10]

The guards’ conduct remained unchallenged in East Germany, but Eduard Wroblewski was publicly denigrated in the East after he died. The East Berlin newspaper "Berliner Zeitung" claimed on July 29, 1966 that a "social deviant" had been stopped at the "state border." It reported that he was a foreign legionary and wanted in the Halle district for major crimes. That he had committed a crime was a rumor without foundation. No evidence was found to confirm the claim that he had joined the foreign legion as a teenager during his short stay in the West. Eduard Wroblewski’s son recalled that the libel and slander continued to have effect years later. [11] How his father died was an open secret in his hometown, but out of shame and fear of reprisals, the circumstances and background of his death remained a taboo within the family. His son first learned the truth when a fellow classmate taunted him by saying that his father was a "criminal" who had been shot at the Wall. He later realized that this "blemish" had accompanied his every step in other ways as well. The Stasi files show that in 1982, when the son was serving his military duty, he was denied training as a radio operator because his father was on file as a so-called "border violator."

The criminal proceedings against the perpetrators that were introduced after the collapse of the East German state showed that not all of the guards had hit or even aimed at Eduard Wroblewski. Once again it became evident that the border soldiers displayed very different attitudes and conduct. The Potsdam district court found evidence that of the six conscripts involved in the incident, one did not shoot at all, another intentionally shot off-target, and two had aimed but missed. Two of the former border guards were held accountable for the fatal shots that killed Eduard Wroblewski. They were sentenced in August 1996 to 18 months probation for manslaughter. [12]