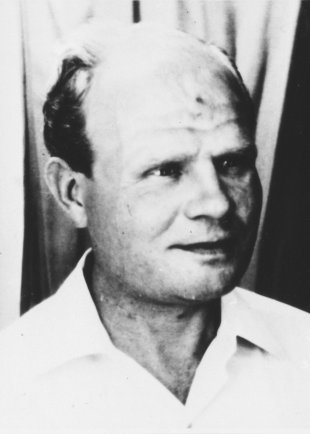 in the Spandauer Schiffahrts Canal
on the sector border between Berlin-Tiergarten and Berlin-Mitte
Two border guards noticed him near a former loading ramp. The fishermen had notified the West Berlin police and British military police and they had both arrived at the scene by then. When the East German border guards fired a warning shot, the West Berlin police called out: "Don’t shoot. He jumped in from our side and is a little drunk!"Heinz Schmidt was born on October 26, 1919 in Berlin. He married in 1949 and lived with his wife and their three children in the West Berlin district of Wedding until 1962. As he got older, his mental health deteriorated. [1] He became an alcoholic and was unemployed. He repeatedly came into conflict with the law for minor offenses, such as drunkenness, theft and fraud, and had to spend time in prison and pay a number of fines. In 1962, the Berlin-Wedding local court labeled him "mentally frail" and a lawyer was appointed as his caretaker.

He came into conflict with East German border guards in September 1965 when he began insulting them loudly as he crossed the sector border at the Oberbaum Bridge from the West Berlin district of Kreuzberg. [2] After living apart from his family for a few years, he was divorced in April 1966. In mid-July he moved into a homeless shelter in Wedding. On August 29, 1966, Heinz Schmidt was rebuffed by the social welfare office when he asked them for money. He met his father that afternoon, but his father was unable to help him. A short time later the 46-year-old man turned up on the southern bank of the Nordhafen Harbor in the Tiergarten district. Highly intoxicated, he took off his clothes and entered the water in his underwear. Two fishermen called out to him that he was swimming in the border waters and that he should get out right away. Heinz Schmidt, however, continued to swim across the Spandauer Schiffahrts Canal, which in this area belonged in its entirety to East Berlin.

Two border guards noticed him near a former loading ramp. The fishermen had notified the West Berlin police and British military police and they had both arrived at the scene by then. When the East German border guards fired a warning shot, the West Berlin police called out: "Don’t shoot. He jumped in from our side and is a little drunk!" [3] The border guards opened fire anyway – at the man who, because of his illness, did not know what he was doing. He swam to the east bank among a hail of bullets and sought cover where a wall of the loading ramp projected slightly outward. A policeman ordered him to take cover and stay there. [4] But after a short rest Heinz Schmidt went back into the water and tried to swim under the water back to the western embankment. He had to come up for air a number of times and came under fire from border guards posted on the roof of a former ice cream factory and in a bunker in the Invaliden Cemetery. Although he was hit by five bullets, Heinz Schmidt managed to reach the west bank. Firemen pulled him out of the water at 1:45 p.m. and brought him to the Rudolf Virchow Hospital where the doctors could do no more than determine that he was dead. A bullet had shattered his cervical spine. Heinz Schmidt was buried on September 8, 1966 in the St. Pauli Cemetery in Wedding. 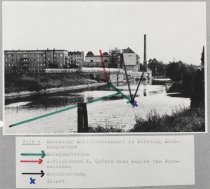 Heinz Schmidt: West Berlin crime site photo of the Spandauer Schifffahrts Canal between Berlin-Tiergarten and Berlin-Mitte [Aug. 29, 1966] (Photo: Polizeihistorische Sammlung/Der Polizeipräsident in Berlin)
Many people on both the west and east side of the canal had watched the events unfold. In the East a brewery worker was arrested for insulting the border soldiers. Cries of "murderers!" were called across the canal from the west side. [5] A number of bullet holes were later found on the outer wall of the Nordhafen Harbor warehouse in West Berlin. One bullet even hit the balcony window of an apartment located 1.5 kilometers from the canal. [6] When a family in West Berlin was driving nearby, the car door on the left side was hit by a ricochet bullet. The western press reported in detail on the shooting in the Nordhafen Harbor. A speaker of the Senate called the "murder of a person, who was not completely sane, particularly tragic, cruel and inhuman." [7] The three Allied city commanders condemned the incident as an example of "cruel disregard for human life." [8] In "Neues Deutschland," the Communist Party paper in East Germany, the incident was referred to as a "new provocation." It stated that "in order to secure the inviolability of the state border, it had been necessary for the border guards of the NVA to use their firearms." [9]

The West Berlin police officers present at the scene faced charges for failing to assist a person in danger because they had not provided Heinz Schmidt with covering fire, but they were defended by the mayor and by the interior minister, Heinrich Albertz: The officers could not have noticed the bullets since they struck 150 meters away from the police car. A police labor union press release stated: "Even the tragic situation at the Wall cannot allow police officers to let their actions be led by their emotions." [10]

In 1991, the Central Investigating Agency for Governmental and Party Crimes opened preliminary proceedings against the East German guards suspected of having shot Heinz Schmidt. The East German border troop files do not indicate clearly who fired the shots. In the 1990s none of the former border guards was able or willing to remember. The border soldier who received the "Medal for Exemplary Service at the Border" – his three comrades were awarded the "Badge of Merit" – refused to incriminate himself by testifying on his use of his weapon. He insisted that it remained a mystery to him why he received the medal. Because of this wall of silence, at the end of the investigation there was no one "who could prove with certainty that he had fired a shot or many shots at Heinz Schmidt – perhaps with the intention to kill, and this proof would be necessary for an arraignment." [11] Consequently, the public prosecutor’s office had to close the case without a verdict on July 25, 1997.