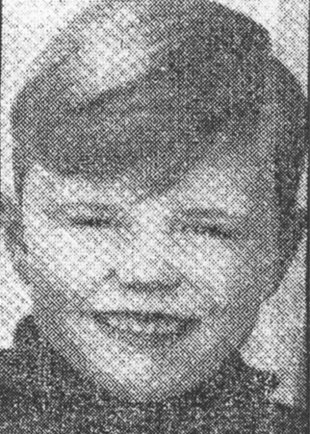 September 13, 1966 was a hazy late summer day. That morning between 10 and 12 o’clock, six year-old Andreas Senk was pushed into the Spree by a playmate of the same age who, shocked by his own actions, ran away. [11] When the six-year-old – the only son of his 25-year-old mother Renate Senk – fell into the water at this spot, he fell from the west side of the city to the east side since the entire width of the Spree here belonged to the Soviet sector. The East regarded the border here to be an official state border and kept it heavily guarded, although the guards here focused their attention primarily on the east side. Either the guards posted on the Oberbaum Bridge watchtower about 200 meters away did not notice the incident, or they did not consider it a serious "border violation." The same was true of the East German border boats that were patrolling along the middle of the river, approximately 80 meters from the western riverbank. For hours no effort was made to save or retrieve Andreas Senk from the water.

The East German border boat did not register the presence of four West Berlin fire trucks until 2 p.m.: "Firemen on the western bank began searching the Spree with long poles. At 2:30 p.m. a child, approximately 5 years old, was pulled out of the water and quickly transported into the western hinterland. Afterwards all the forces withdrew to the western hinterland without further action." [12] Andreas Senk was brought to the Bethanien Hospital where he was declared dead.

"Six-Year-Old Dies Before the Very Eyes of the Border Police" ran the headline in the West Berlin "BZ" the next day. [13] The same day the speaker of the West Berlin Senate condemned the behavior of the East German border guards on the patrol boat, accusing them of having hampered and even prevented the rescue operation. The Berlin Christian Democrats requested that the public prosecutor’s office at the Central Registry of State Judicial Administrations in Salzgitter "immediately open an investigation against the zone border guards who were partially responsible for a six-year-old’s death."

It is not clear whether the border guards even noticed that the boy had fallen into the water. There is no note of it in the files. Two days after the accident, after firemen involved in the rescue operation had been questioned, the claim that the patrol boat had prevented the rescue was toned down. A chief fire inspector reported that when the firemen had arrived at the riverbank, the boat had reached the rescue site from a distance of about 30 meters. "He had called out to the zone soldiers: ‘We have to search here. Apparently someone has fallen in.’ A soldier answered: ‘Okay, but don’t come too far out into the water.’ The border guards stood on the deck the whole time with their machine pistols in ready position, but otherwise they did not do anything." [14] But they also did not do anything to help find the boy as they had been asked to do by the western side.

Does this make Andreas Senk a victim at the Berlin Wall? The fact that the fire department was notified so late was not political. Andreas Senk could only have been rescued alive if he had been retrieved from the water within a maximum of eight minutes after his fall. But the chances that he could have been rescued at this site in particular were very low and this was definitely because of political reasons: "There were no passersby at the Berlin death strip that could have quickly become rescuers," wrote one commentator. "And even if they had been there, wouldn’t they have expected to be shot when they jumped in the East Berlin waters?" [15]

Another four children fell - from West Berlin to East Berlin - into the Spree here at the Gröbenufer in Kreuzberg and died between 1972 and 1975. The fact that they could not be rescued and were retrieved under awkward conditions had to do with the border situation. Finally, in the fall of 1975, a new agreement to prevent these kinds of accidents from occurring in the future was reached between the government offices in East and West Berlin and was implemented in the spring of 1976: Rescue posts with a light on all sides, which was also visible from the East German border watchtowers, were installed on the West Berlin side along six kilometers of the water border.