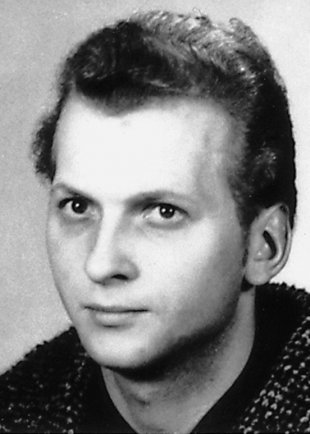 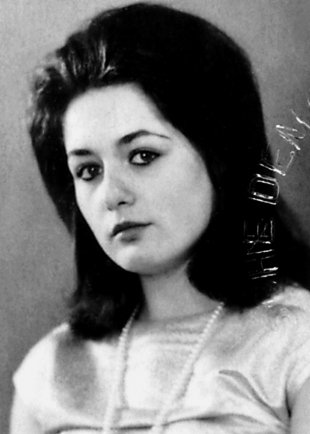 across from the Reichstag building, near Kronprinzen Bridge
at the sector border between Berlin-Mitte and Berlin-Tiergarten
The temperatures had reached almost freezing on the evening of February 18, 1968 when the young couple attempted to cross the border to West Berlin. They chose to flee from the Spree in the city center, diagonally across from the Reichstag building, a spot that was heavily guarded and secured. 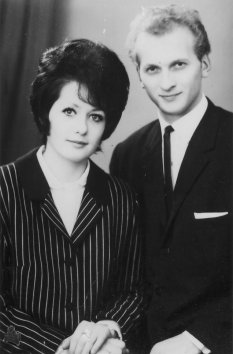 Elke and Dieter Weckeiser: Wedding photo (November 1966) (Photo: private)
Dieter Weckeiser, born on February 15, 1943 in Rhodebach/East Prussia, was only 25 years old when he was shot and killed by border guards in mid-February 1968. His short life was dominated by flight. [1] After his father fell on the eastern front in 1943, his mother fled with the young boy to West Prussian Elbing in 1944. When the Red Army approached in January 1945, they again fled westward. The Weckeisers spent a few years in different places in the Soviet zone of occupation before they finally reached West Germany in 1949. Once there they lived in various refugee centers and homeless shelters. The family was finally able to settle permanently in Warendorf, Westphalia, when the mother remarried in 1954.

The young boy had suffered from tuberculosis while he was growing up. At the age of seven he spent half a year in a sanatorium where his mother was not allowed to visit him. After finishing school Dieter Weckeiser trained to become a furniture upholsterer. During this period he met Renate G. who had arrived in Warendorf from East Germany in March 1961. He wanted to marry her, but his mother and stepfather were opposed to the relationship. Later his mother testified to the Berlin public prosecutor’s office that the family conflicts intensified after that.

Without telling their parents, Dieter Weckeiser and his pregnant girlfriend moved to West Berlin in July 1962 and tried, unsuccessfully, to gain a foothold there. On the insistence of his girlfriend, he agreed to resettle in East Germany, in Fürstenwalde/Spree, where Renate G.’s parents lived. The couple married there in 1962 and had three children. Dieter Weckeiser worked in various jobs, including as an interior designer and as a co-driver. They divorced in 1966 and shortly after that Dieter Weckeiser became seriously ill. [2] It was during this period that he met the twenty-year-old Elke Möbis, who, after completing an apprenticeship as a textile twister, had found work as a kitchen assistant in a company cafeteria in Fürstenwalde. They married in late November 1966. The next year Dieter Weckeiser saw his mother for the first time since he had hastily fled from Warendorf. Since she was not allowed to travel to Fürstenwalde they met every day for an entire week in East Berlin, which his mother was able to visit on a one-day visa from West Berlin. During their last meetings Dieter Weckeiser told his mother that he had come under political pressure after he had used his experience in the West to try and revise the official image of West Germany as the class enemy. He also expressed a desire to return "home" to the West. [3] 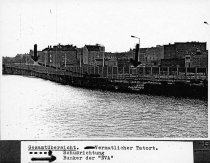 Elke and Dieter Weckeiser: West Berlin police photo with site of incident marked in the death strip between Berlin-Tiergarten and Berlin-Mitte [Feb. 18, 1968] (Photo: Polizeihistorische Sammlung/Der Polizeipräsident in Berlin)
The temperatures had reached almost freezing on the evening of February 18, 1968 when the young couple attempted to cross the border to West Berlin. They chose to flee from the Spree in the city center, diagonally across from the Reichstag building, a spot that was heavily guarded and secured. After getting past the barbed wire and watchdog run, they had to climb over a three-meter-high expanded metal fence and then swim across the ice-cold Spree. The bank on the west side consisted of a wall that they had to pull themselves up and over, which was practically impossible without tools or help from someone. Guards stationed on a tower noticed them crawling under the first barbed wire at about 11 p.m. and immediately began to shoot at them without warning. A total of seventeen shots were fired from the tower. Elke Weckeiser was hit in the chest and thigh. A bullet went through Dieter Weckeiser’s skull. 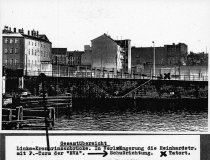 Elke and Dieter Weckeiser: West Berlin police photo with crime site marked in the death strip between Berlin-Tiergarten and Berlin-Mitte [Feb. 18, 1968] (Photo: Polizeihistorische Sammlung/Der Polizeipräsident in Berlin)
An ambulance brought the critically injured couple to the nearby People’s Police Hospital. The young woman died there from her injuries that very night. An emergency operation was conducted on her husband, but he died the next day.

The border soldiers were commended and awarded the "Medal for Exemplary Service at the Border." One of them was promoted ahead of time to private. Thirty years later they faced charges from the Berlin district court for the shots fired at Elke and Dieter Weckeiser. The guard who fired the shots was sentenced in 1997 to a probation term of one year and nine months for "a less serious case" of manslaughter. His supervisor, who referred to the dead couple in front of the court as "two border violators who intentionally endangered themselves," was acquitted because the court decided that he could not be held legally responsible for the "excesses" of the gunman. [4] The majority of the officers and soldiers who were stationed at the border had already stated during their police interrogation that, from an objective viewpoint, the use of firearms had not been necessary. [5]

To conceal the circumstances under which the young couple had died, the East German secret police created a "legend," a false version of events, which entailed a purposeful character assassination of them. [6] It was decided that Dieter Weckeiser’s debts should be paid for by the state treasury in order to prevent "creditors [...] from conducting their own inquiry and learning of the concrete circumstances of the Weckeisers’ death." [7] Dieter Weckeiser’s ex-wife was told by the East German secret police that her former husband had died with his new wife in a traffic accident with a stolen car. The mail of the dead couple’s relatives was monitored and confiscated. Consequently, Dieter Weckeiser’s mother, who had inquired in vain to the East German police, did not learn that her son had died while trying to escape until a year later when the minister of her hometown in the West had established direct contact with the minister in Fürstenwalde in the East. [8]

The urn containing the ashes of Elke Weckeiser was buried in her mother’s grave in Fürstenwalde on May 7, 1968. Her half-sister had to first assure the Stasi that she would refrain from having a "ceremonial burial" or placing a death notice in the newspaper. [9] The urn with the ashes of Dieter Weckeiser was withheld from his relatives by order of the East German secret police and buried at the Baumschulenweg Cemetery in Berlin-Treptow.