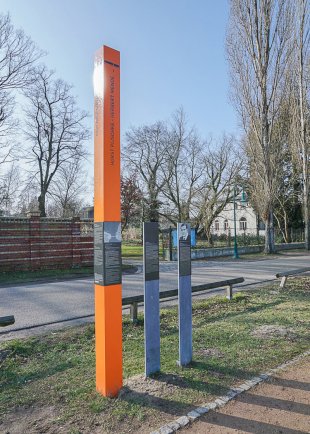 at the Glienicke Bridge
on the outer ring in Potsdam

died from his bullet wounds on March 10, 1968
When he did not receive an answer, he ran off to catch his bus. Herbert Mende later told his father that one of the policemen came out of the guardhouse and called out to two other border guards who were patrolling close by: “Shoot him! Shoot him!” After firing a warning shot, one of the border guards fired two shots at the young man from a distance of 30 meters.Herbert Mende was born on February 9, 1939 to Anastasia and Franz Mende. He grew up with two older sisters in Steinaugrund, Silesia, which is now Ligota Tulowicka in Poland. In 1945 his mother fled with the children to Zieran in the Altmark, where the father joined them after he was released from British captivity. In 1957 the family, which by this time had also taken in a foster child of Ana Mende’s brother, moved to Potsdam. After completing an apprenticeship at the state-owned company "Ausbau Potsdam,” Herbert Mende worked in Potsdam as a floor technician and mason. [1]

Herbert Mende went out dancing on the first Saturday in July 1962. He traveled all the way from the West of Potsdam to the eastern edge of the city where the youth clubhouse “John Scheer” was located. From there it was not far to the death strip and the Glienicke Bridge, which was heavily guarded and only accessible to Allied military personnel. West Berlin was situated on the other side – and had remained off-limits to Potsdam residents ever since the Wall was built. The young man left the youth club just past midnight in order to catch the last bus back home. The East German customs head assistant saw “a male civilian” approaching him at about ten past twelve. He moved toward Herbert Mende at which point the young man, intoxicated and not without a touch of irony, asked him: “Uncle, can you tell me where the bus to Potsdam departs?” After the customs officer gave him directions, Herbert Mende walked toward the bus stop – and away from the border. He apparently looked back a number of times and called to him: “You can put down your damn gun and change your opinion, too.” [2]

It all might have ended well if a guard patrol of the East German police force had not arrived at that moment and caught up with the young man in order to check his identification papers. Herbert Mende did not have his ID with him and was only able to show his military service registration card. The policemen decided to take him with them to the East German police district office “to do a further check.” [3] They escorted him to a guard house that was situated right at the Glienicke Bridge barrier where they planned to have him picked up. [4] That was practically the same as a preliminary arrest, but the 23 -year-old apparently did not know this at the time. Herbert Mende was told to wait outside the building. When, a few minutes later, the bus he had been waiting for arrived at its final destination and turned around to begin its return tour, the young man asked the policemen whether they still wanted anything from him. When he did not receive an answer, he ran off to catch his bus. [5] Herbert Mende later told his father that one of the policemen came out of the guardhouse and called out to two other border guards who were patrolling close by: “Shoot him! Shoot him!” [6] After firing a warning shot, one of the border guards fired two shots at the young man from a distance of 30 meters. [7]

From his hospital bed a week later, Herbert Mende presented the events from his point of view in an accident report for his insurance company: “Had been dancing in a youth clubhouse from 7.7.- 8.7., 12.20 a:m. Had consumed alcohol and wanted to go home on the bus at 12.20 a:m. While looking for the bus stop, two policemen came up and asked me where I was going; I answered: to the bus stop. When the policemen demanded to see my ID I realized that I had forgotten it. The police took me with them up to the barrier in the prohibited zone and made phone calls; they had already demanded from me my personal data and written everything down. When I saw the bus coming, I ran, thinking that they were through with me and I wanted to catch my bus. I saw the bus in front of me and then shots were fired and I collapsed. Before I lost consciousness I only heard one voice that said: ‘That bastard hasn’t gotten enough.’” [8]

Herbert Mende was brought to the district hospital in Potsdam. It is thanks to the resolute insistence of the head doctor there that the seriously injured young man was not transferred the following day to the army hospital in Drewitz. For months he was only barely able to withstand the pain from his injuries. The bullet wounds in his pelvis and abdomen had turned him into an invalid. He was awarded 124 marks a month pension in early 1963. [9]

The East German police and border police admitted to his parents that an “accident” had occurred. The father was even permitted to review the files on the incident. He gathered from them that the East German police had made an error in bringing his son into the prohibited zone. [10] An internal investigation report of the East German Ministry of the Interior, which at the time was still responsible for the border police, criticized the “poor tactics” and the “unsatisfactory cooperation between the forces” and concluded that the use of firearms had “not been necessary.” [11]

The armed forces lacked this openness towards Herbert Mende and his family. The “VP officer present at the accident bears no guilt,” the district authorities of the East German police in Potsdam told the Mende family’s attorney. He was told that he should instead contact the military state prosecutor of the 2nd Border Brigade in Gross Glienicke. [12] But the military state prosecutor H. also denied to the family that the marksman had made himself culpable through his actions. Hence he did not open a preliminary investigation and saw no reason to provide them with the name of the border soldier in question. [13]

In 1960, before the incident, Herbert Mende had taken out a combination accident and sick pay insurance with the “Deutsche Versicherungs-Anstalt” (DVA), an East German insurance company. After the shooting, he and his parents were involved in a struggle for years over receiving the benefits of this insurance. It did not end until a settlement was reached in June 1966 in which the DVA agreed to pay the legal and trial costs. He was also awarded 10,000 marks compensation for pain and suffering and 16,000 marks disability payments.

After 1990 Herbert Mende’s father had a preliminary investigation opened against the man who had shot his son. He argued that the border guards could not possibly have mistaken the young man for a “border violator” since he was not moving towards West Berlin but in the direction of Potsdam. But the case was dismissed in the fall of 1996 because the public prosecutor was unable to prove without a doubt that the gunman had had the intention to kill. [14] The case was reopened again following a complaint filed by the father. This time, in his defense, the gunman claimed that he had not intended to shoot Herbert Mende, but only wanted to give him a scare, and had pointed his weapon to the ground when he started shooting from the hip. Consequently, the public prosecutor concluded “that with near certainty, he had not recognized the danger of his actions, not to speak of taking them seriously.” [15] In a letter dated February 25, 1997, the case was closed in favor of the perpetrator for the second time. Nonetheless, Franz Mende once again filed a complaint, underscoring the fact that in the case of his son it did not entail an escape attempt that could have “justified any use of firearms.” [16] The attorney general of the state of Brandenburg was of a different view. He wrote to Franz Mende that it could not be disproved that the guard “erroneously presumed that your son was a so-called ‘border violator.’ Nor could it be determined that he willingly accepted the death of your son - that is to say that he had killed with intent.” [17] He continued to explain that the public prosecutor’s office only brings charges against an individual when a conviction is highly likely, not however, when the outcome of the case is uncertain and there is only the mere possibility of a conviction. The events “are extraordinarily tragic and I can imagine the pain you have,” he wrote, but due to a lack of prospects for a conviction he rejected pressing charges. [18]

Herbert Mende: Gravestone at the Neue Friedhof in Potsdam (photo: October 2008) (Photo: Hilde Kroll)
After remaining in the hospital continuously for two years, Herbert Mende was sent home as an invalid in the summer of 1964. His mother had to give up her work to care for her son. [19] After a long and painful period of suffering, Herbert Mende died on March 10, 1968 in the St. Josef’s Hospital in Potsdam – one month after his 29th birthday.